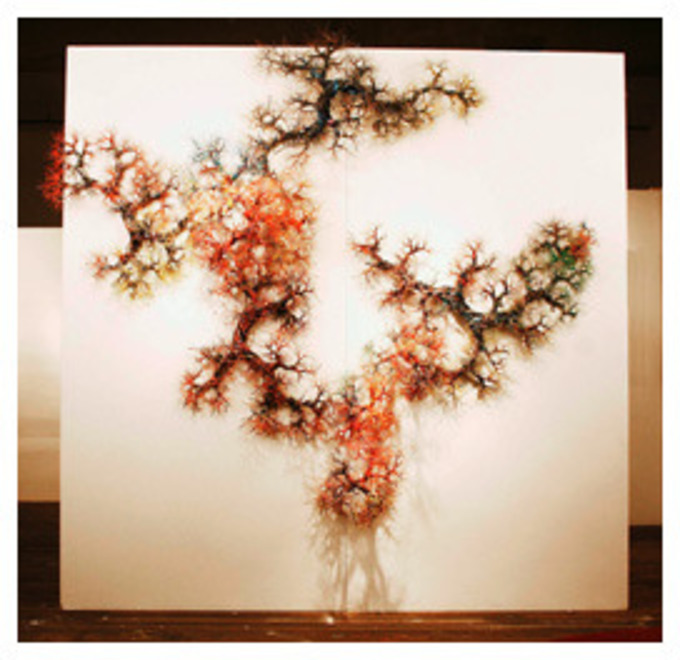 When I arrived at Bushwick's Lumenhouse, someone from the gallery was picking up garbage outside—virtually unseen before in New York City. Inside, the gallery had an equally clean and managed tone, with a photo studio in the front and gallery and artist studios in the back. The show was expertly lit by their in-house film lighting technician. The first artwork of the show, Uprooted by Hyungsub Shin, made of twisted electrical wire, had terrific shadows as a result of this attention to detail. Curiously, another of his Uprooted works is made of a mop twisted into branch-like forms, with the pole resting in a portable heater. People new to or struggling financially in NYC may relate to this piece.

Jon Elliott's urban landscape paintings have one of the most unique surfaces found in contemporary art. These night scenes include TVs and chairs under vagabond highway ramps, bridges and lit skyscrapers, with a line quality resembling an Etch A Sketch®. The painted dots of blues, greens and pinks are electric on black backgrounds. There is one lighter piece, done in pink and aqua, with little TV screen shots collaged onto the TV drawings.

Deborah Brown contrasts the urban and the natural in her deceivingly simple and careful paintings of birds-on-a-wire and silhouetted tree branches. Her blue, pink/salmon, and deep violet washes, sunset colors, leave behind a feeling of dusk.

This is a a very tight three-person show which succeeds by making use of light and shadows, in both the artwork and the exhibition design. Three cheers for collaboration!