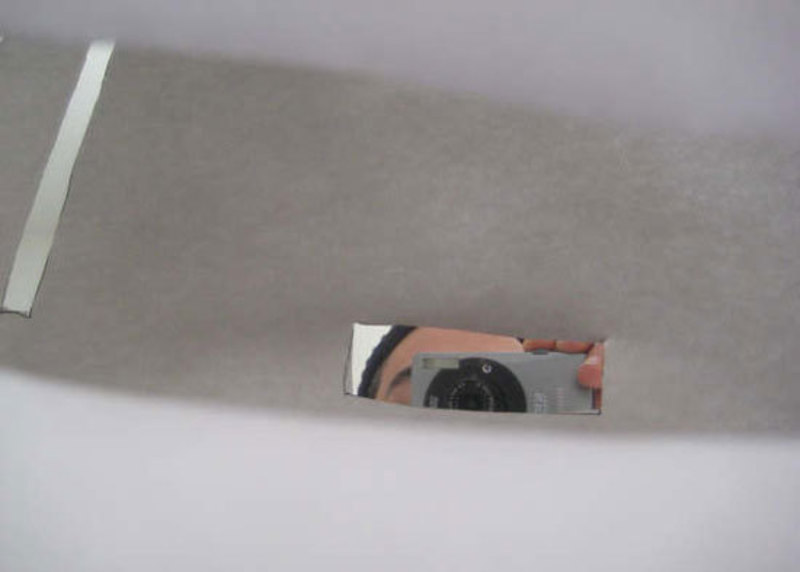 Picking up the PIeces

Harvard Design alumni Carson Chan and Fotini Lazaridou-Hatzigoga conceived their Program (http://www.programonline.de/) non-profit project space in Berlin as a critical forum for examining the significance ofarchitecture. For each exhibition, artists engage the special character of the spacious white-walled ground level of the former Russian-owned Hotel Newa to explore the space's identity as a gallery and, by extrapolation, the gallery's relationship to Berlin.

For "Immediate Archaeologies," Program's current show, horeographer Morgan Belenguer and architect/artist  Luis Berríos-Negrón have blocked off almost the entire gallery, offering viewers only a small sliver of plywood space leading from the entrance into a dead-end in which to manoeuvre.

On one side of this walk-way is a long rectangular wood box hanging at eye-level.  Peering into its peep-holes, one sees objects associated with construction, including long rusty nails and bits of building materials, lit and carefully displayed like archaeological artifacts.

Encountered under these circumstances, the prosaic and worn-out items take on a totemic importance and also a surprising charm. Installations where normally unremarkable items are presented in museum-like conditionsare not uncommon as institutional critiques. But this piece seems less aggressively in opposition to the concept of the gallery as a meaning-making institution and more like a playfully appreciative homage to thestrange, gnarled beauty of the banal bits and pieces themselves.

On the walk-way's opposite side a wall with small slips carved through it is positioned where viewers can look at the remains of a performance that occurred during the opening and is viewable in its entirety on the Program website. The view through the wall is of clusters of random-seeming stuff placed inbizarre formations which the twenty-four vignettes screened on the website show the collaborators ritualistically arranging.

In one of the vignettes, titled "Digging, "concrete dust is cut up into lines like cocaine with a credit card. In another, called "Drawing," similar dust is pushed around with a brush. "Dicking" shows one of the artists, dressed in a pink tank top and dancers' harem pants, placing a cushion against the wall and then determinately positioning it with a wood plank so that it remained upright. In the other videos, more objects are moved, positioned and structured. "Support" shows a blue shirt removed from the floor, where an outline of dust marks its spotlike chalk around a corpse, and carried by the artist to a place where he props two oddly shaped wood pieces together to hang the shirt.

None of these actions or the resulting forms are as interesting as what previous shows at Program produced. But "Immediate Archaeologies" is a dynamic example of how fruitful the curators' mission has been. It is a show that makes one think about the process involved in making and then occupying a space and how happenstance, experiment, problem-solving and play can produce the solid structures in which our lives are lived.

(Image courtesy of the artists and Program)

Posted by Ana Finel Honigman on 8/1/09
RELATED ARTICLES
COMMENTS (0)
ArtSlant has shutdown. The website is currently running in a view-only mode to allow archiving of the content.