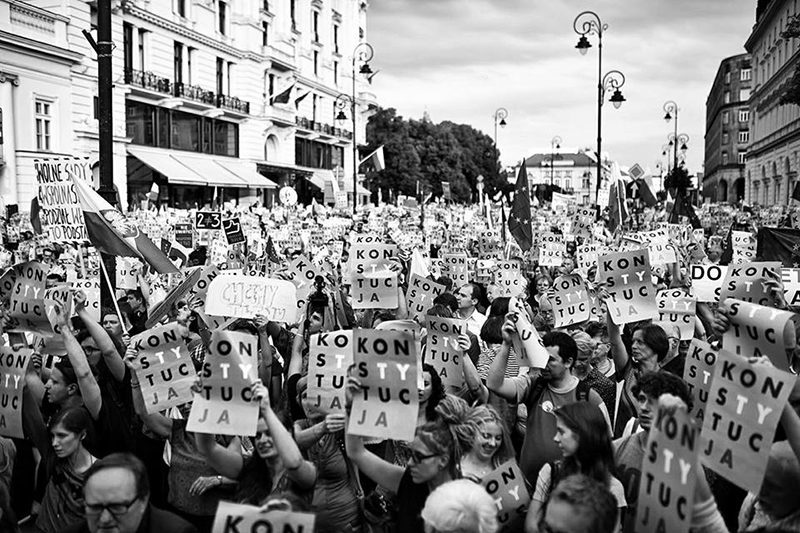 This summer Jill Lepore, writing for the New Yorker, declared that we’re living in a “golden age for dystopian fiction.” She described a literature of “radical pessimism” and “submission” (in contrast, she wrote, to a literature of resistance). In an essay for Tin House author Allegra Hyde called for “literature that chases utopia” in the age of Trump. She urged her fellow writers: “Our trade is in rendering the unreal real. We are world builders, after all.”

As ArtSlant’s resident pessimist, I’ll be the first to concur that dark undertones are leaving their marks on artistic and creative practice today. But I disagree with Lepore’s assessment that pessimism necessarily means submission. Are Dystopia and Utopia not two sides of the same coin? Can we not invoke one to drive the other? Does pessimism preclude pragmatism? Let’s not guilt people into optimism, I say: we’re allowed to feel demoralized in times like these—what we do with our pessimism is another story.

Many, though not all, of the artists we interviewed this year spoke of their frustrations and worries in our contemporary political, social, and technological landscapes. “The exposed hatred of people of color by the white community is stressing me out,” divulged Peter Williams in March, “the only forum I have is through my art.” “I needed a place to channel the rage,” Liz Markus told us. “It’s always been a challenge to locate and maintain a happy life,” said Greg Ito.

In our artist interviews from 2017, what we saw across the board were artists invested in world building, in rendering the unreal real, or in exposing the asymmetries and different lived realities in the world we already have. We spoke with artists who insist on shaping the art world they desire; artists clearing space in museums for underserved perspectives and communities; artists who champion equity and visibility for women, for Black people and bodies, for people with autism or disabilities; artists calling for satire, protest, even revolution.

Stress, rage, and sadness haven’t stopped these artists. And whether you’re a pessimist like me, or not, I hope they won’t stop you.

These are ArtSlant’s top artist interviews from 2017: 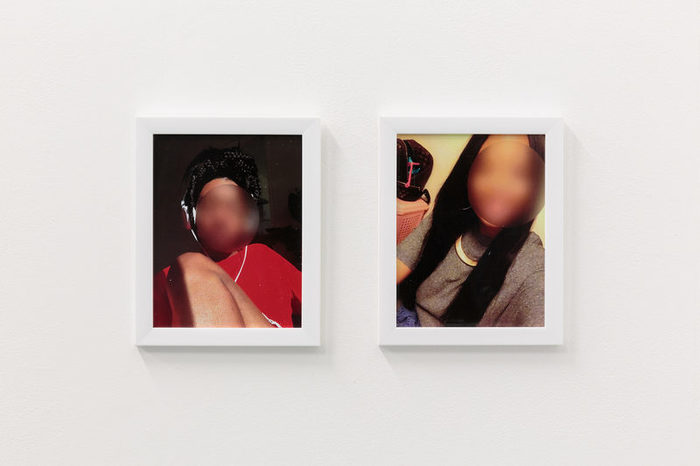 “I wanted to do violence to portraiture here, in a rather timid way.” —Aria Dean

“What happens when pro-blackness is subsumed into an aesthetic turnstile?... I see contributing to ‘art’...as being a snitch.” —Hamishi Farah

In our most-read interview of the year, Audrey Phillips spoke with Aria Dean and Hamishi Farah on the occasion of their London exhibition, White ppl think I’m radical. The duo deftly discussed the ways in which they navigate making and consuming Black portraiture today, considering the complexities of giving and withholding, visibility and invisibility.

Designing Resistance in Poland: How a Simple Poster Became a Viral Symbol of Protest 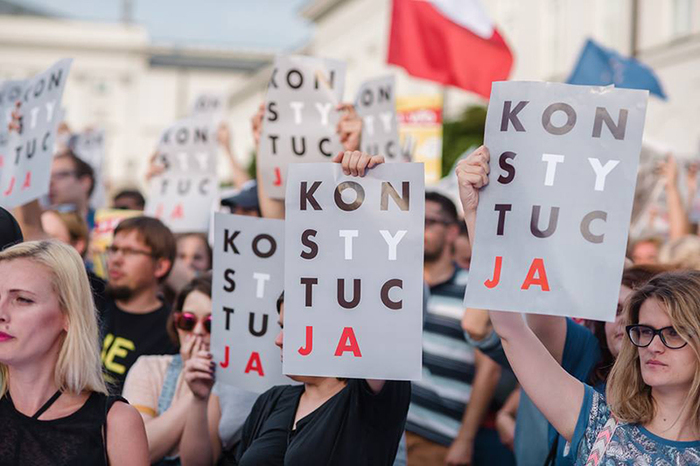 “Distinctions such as drawing vs. painting, art vs. design, bother me. I believe categories sometimes limit your freedom.” —Luka Rayski

Poland erupted in protest this summer when the far-right government made constitutional moves to consolidate power. Christian Petersen spoke with Luka Rayski, a young designer whose poster unwittingly became the symbol of resistance nationwide. 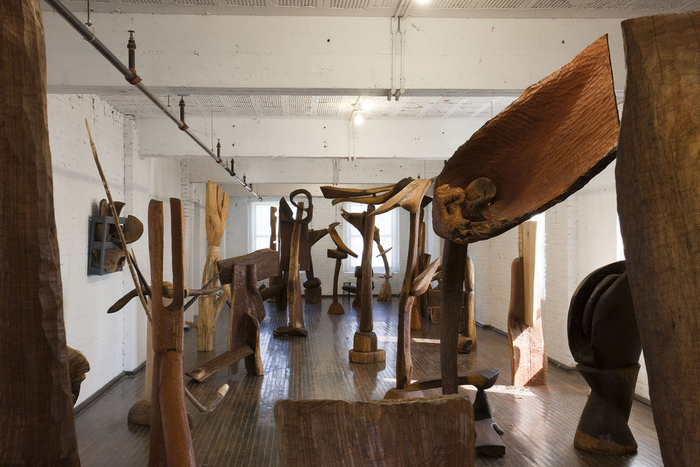 “The main thing that sustained me was that I wanted to find out what I could do and I haven’t found that out yet.” —Thaddeus Mosley

In this inspiring interview, 91-year-old Pittsburgh sculptor Thaddeus Mosley tells writer Jessica Lanay what he’s learned over the span of his unique career—from the definition of a “Black artist,” to how to avoid the trappings of the commercial art world. This is a must read for all aspiring artists. 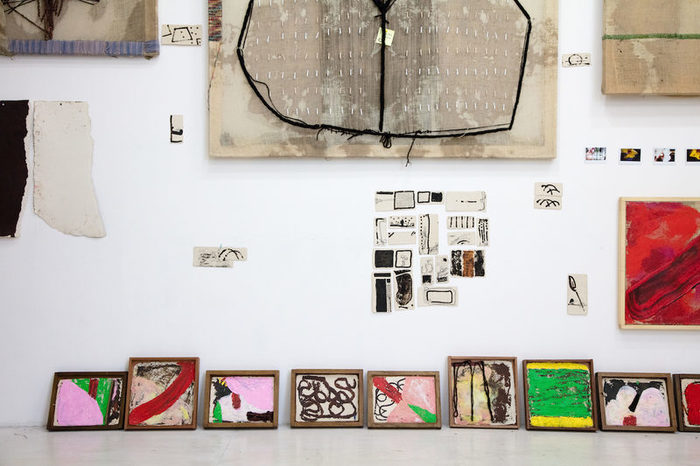 “One of my cousins who never goes to museums or galleries said he felt comfortable in the room and that meant everything to me.” —Alvaro Barrington

Alvaro Barrington’s artwork is intimately informed by the conversations and communities who have made him who he is. On the occasion of his MoMA PS1 solo he tells fellow artist Cristine Brache how he wanted to create a show where his brothers could enter a museum and “feel like there is a space there for them.” 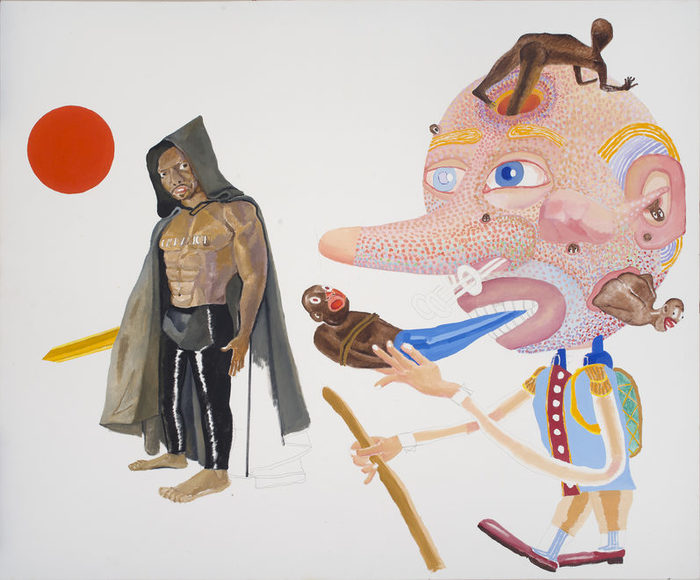 Peter Williams, The Return of Trayvon, 2016. Courtesy of the artist

“My vision is of the history of art being able to tell the appalling story of humankind and the evils it perpetuates.” —Peter Williams

Peter Williams makes art to bear witness, he told Bradley Rubenstein back in March. This challenging interview, conducted at a time when police brutality against Black men and women is more visible than ever, shows the seasoned painter thinking about the purpose of art history and grappling with how his art enters the broader conversation between politics and history. 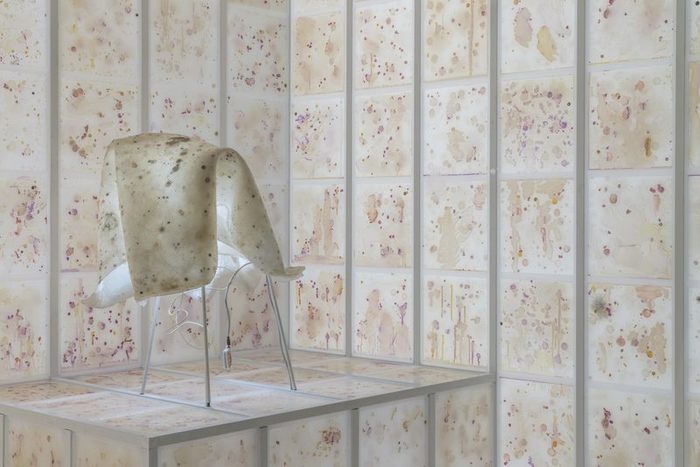 “I want my work to perish.” —Anicka Yi 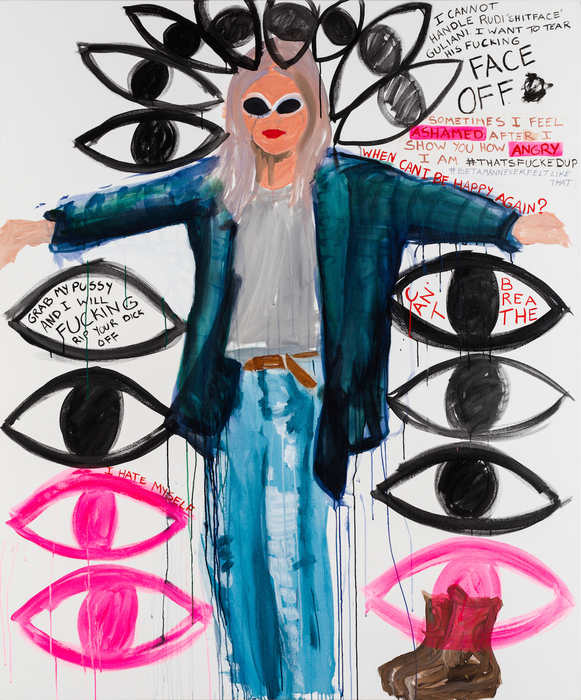 “You must have some experience of the brutal nature of existence in order to create a painting that has depth.” —Liz Markus

“Grab my pussy and I will fucking rip your dick off,” reads a line scrawled into a November 2016 painting by Liz Markus. In a political moment primed for parody, she spoke with Bradley Rubenstein about empathy, the slippery language of satire, and the equal treatment her paintings give to subjects like punk rockers, celebrity girlfriends, and Nancy Reagan. 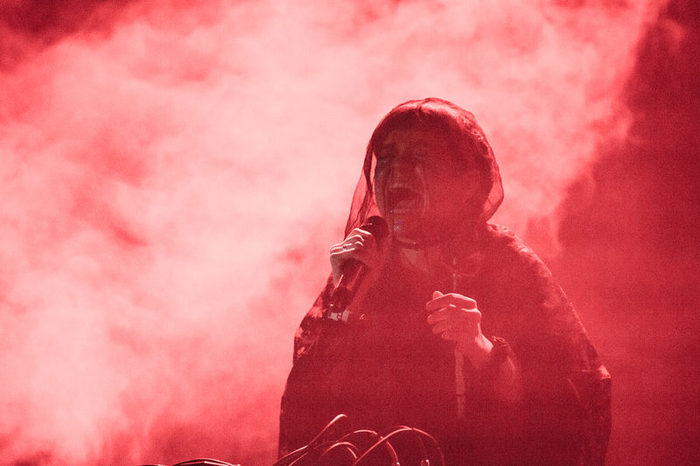 “Poorgrrrl is bipolar as fuck. Like, there is the pity, this poor girl, and then there is the rage that goes hand-in-hand, repressed or not.” —Poorgrrrl

In one of our most candid and raw interviews of the year, Miami performance artist Poorgrrrl told Audrey Phillips about navigating the unstable territory between pity and rage. Can a “damsel in distress” be feminist? Poorgrrrl unpacks an enduring trope, leaving us with no easy answers. 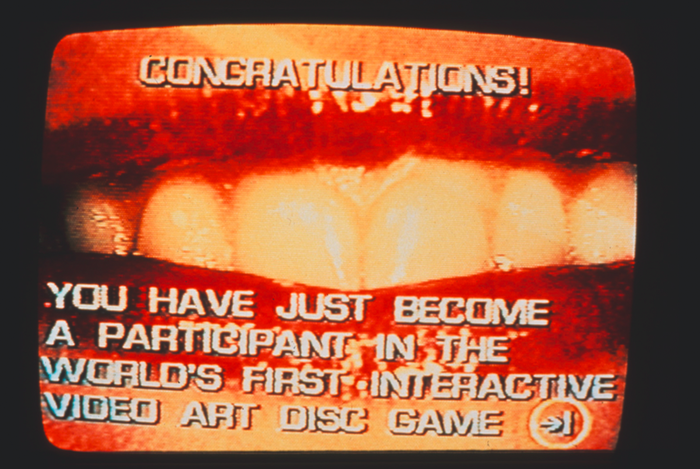 “Social media has a great ability to change reality—we have to learn as a global culture how to mobilize it in order to overcome oppression and freely communicate.” —Lynn Hershman Leeson

We knew how awesome Lynn Hershman Leeson is, but this interview with Olivia Murphy really brought home just how radical and innovative her use of technology has been throughout her career. This is the artist who first used, and even helped develop, the touchscreen—the touchscreen! Think about that. 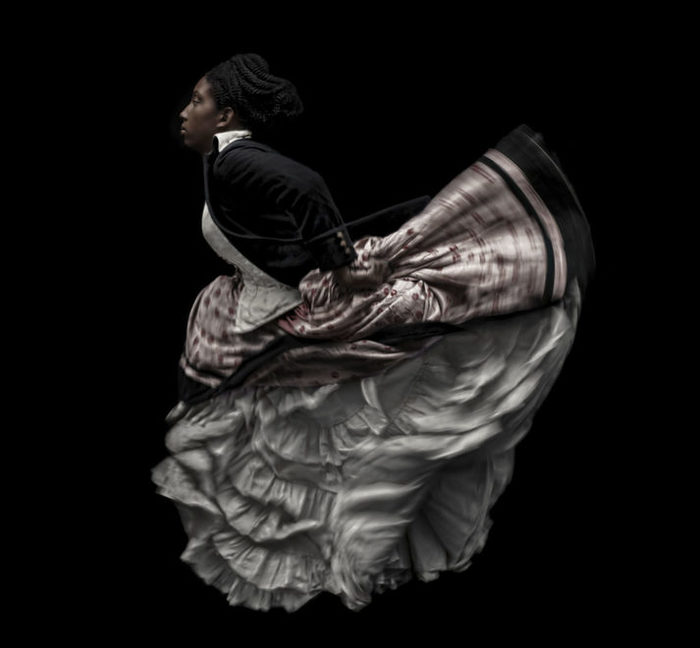 Ayana V. Jackson, Labouring under the sign of the future, 2017, Archival pigment print on German etching paper, 119 x 109 cm. All images courtesy of the artist and Gallery MOMO, Cape Town

“Is it possible to see the Black woman’s body as simply beautiful, as light, as free, as not in pain, as not suffering?” —Ayana V. Jackson

Ayana V. Jackson works from both sides of her camera to reframe the way the Black female body has traditionally been represented in photography. She spoke with Jessica Lanay this summer about race, gender, pleasure, escapism, and creating monuments that are missing for the Black femme in history. 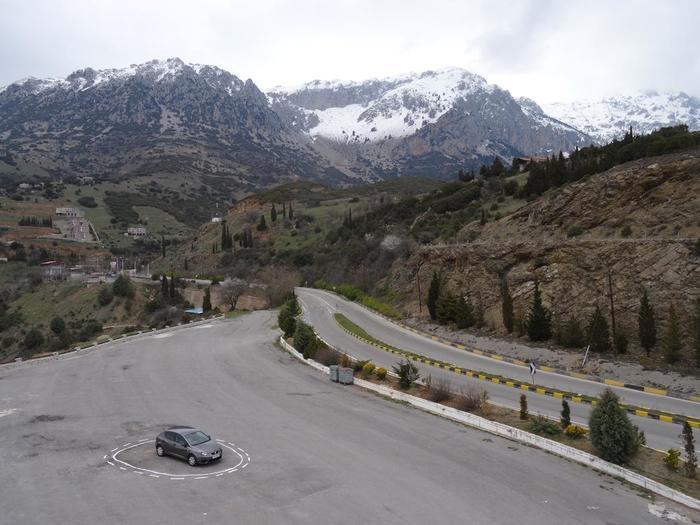 “This is not really about building this technology; it’s about building an understanding of the world through learning about how these systems work.” —James Bridle

James Bridle programmed and “trapped” a self-driving car inside a circle resembling road lines. At a time when the average person doesn’t understand the mechanics and code behind the objects we use, Bridle questions the implications of technology and AI on governance, society, labor, and commerce. He spoke with Benjamin Busch in Berlin.

Greg Ito Offers a Pictorial Language for Our Dreams 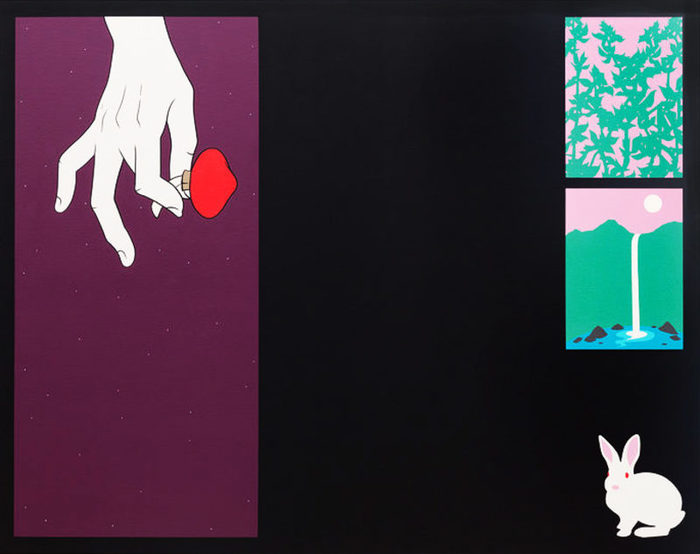 “I think about going on a vacation and having a plane crash.” —Greg Ito 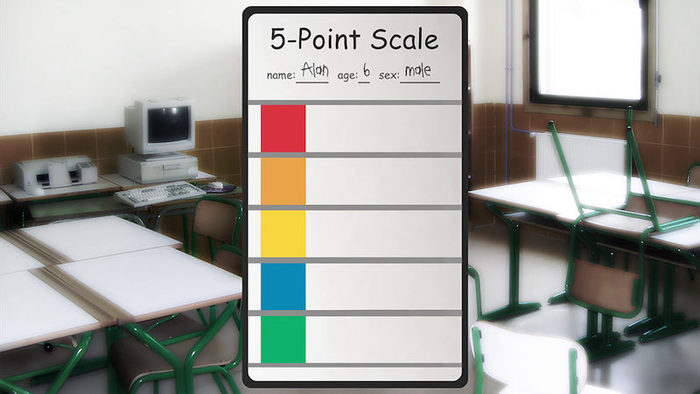 “We are not machines, we are human beings...” —Andrea Crespo 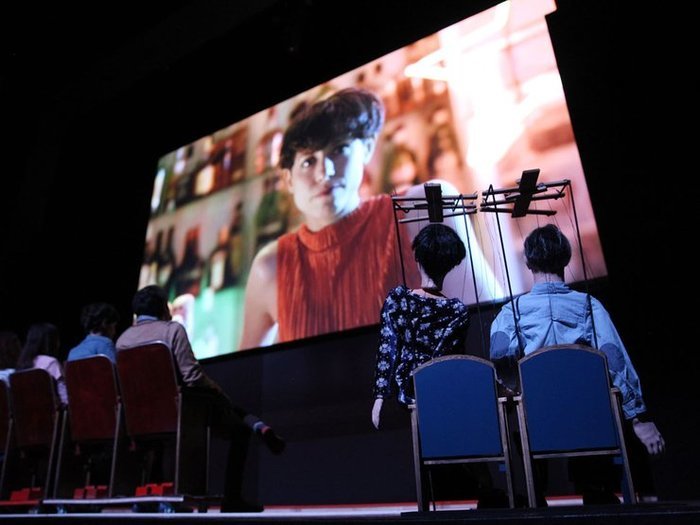 “I don’t think political theater needs to be propaganda, but I don’t like theater that hides its political ideas too much either.” —Mariano Pensotti

Mariano Pensotti makes work that truly responds to the needs of our troubled generation, writes interviewer Olga Stefan. It’s a big ask—but the Argentine director is up to the challenge. He talks here about his radical film-within-a-play-within-a-puppet-show, and what can be learned about contemporary society by interrogating the 100-year-old legacy of the October Revolution.