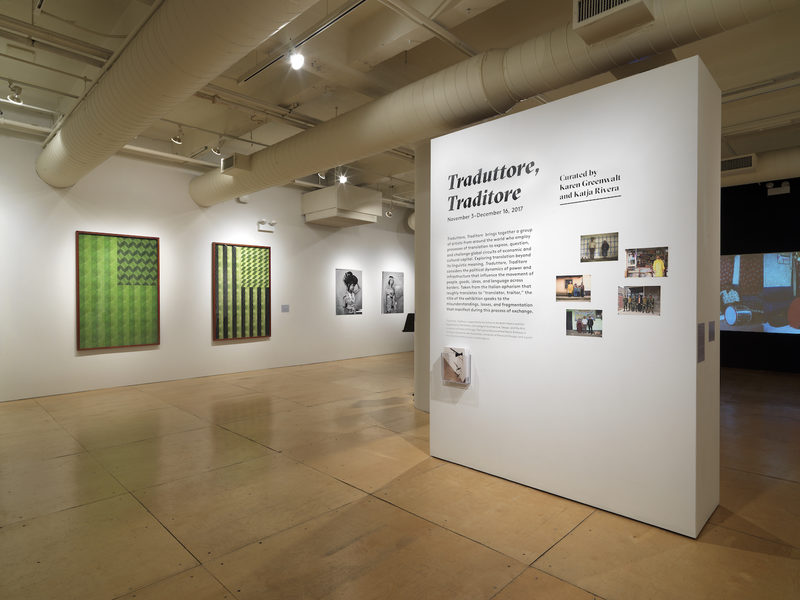 The Traitorous Translator: Power and Representation in Transnational Discourse

My memories of learning a second language date back to my post-elementary school years, what they call the prep-year, in a bilingual school in Turkey. From the first lesson, the struggle to communicate was real: our teacher, who was from Wales, spoke only English, and my class of ten Turkish-speaking students got by with dictionaries and gestures. For many of us in that classroom, and in Turkey more broadly, not knowing English was a failure—and it was something we had better remedy soon.

When I first saw Luis Camnitzer’s work at Gallery 400 in Chicago, I had a flashback to my English class. I could only read one of the six lines from Camnitzer’s Insults (2009): “All those who can’t read English are stupid.” As an artist, critic and an educator, Camnitzer addresses socio-political issues, using tongue-in-cheek texts to question and challenge global economic discourse. In Insults, his use of humor highlights perceptions of language and how hierarchies—insiders, outsiders—might appear between translations. English is a language, but it’s also a mechanism of power, a social and economic infrastructure—it can be an entryway or a barrier depending on who’s speaking and what, or where, they’re trying to access. 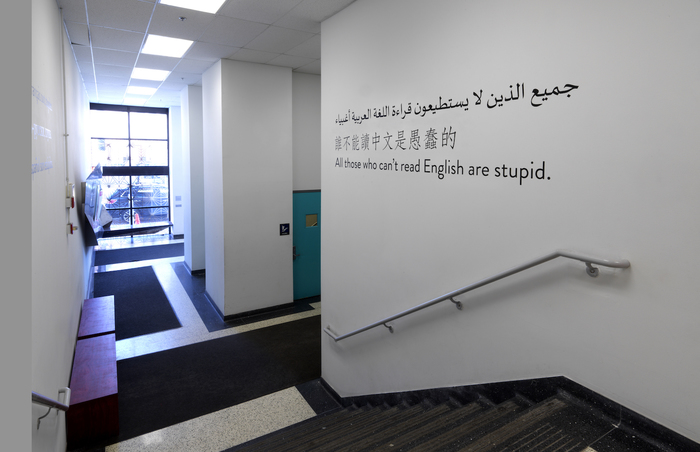 Curated by Karen Greenwalt and Katja Rivera, the group show Traduttore, Traditore, at Gallery 400, explores the dynamics of power and the shortcomings of globalization, particularly in respect to the movement of people and things as they cross borders. The title is taken from an Italian aphorism that roughly translates to “translator, traitor,” and refers here to the flaws in the process of cultural, artistic, and linguistic translations. Artists in the show point to the entanglement of language, customs, economy, memory, and history: what meaning is lost, or found, when an artwork, commodity, or body travels from one space, venue, or country to another? 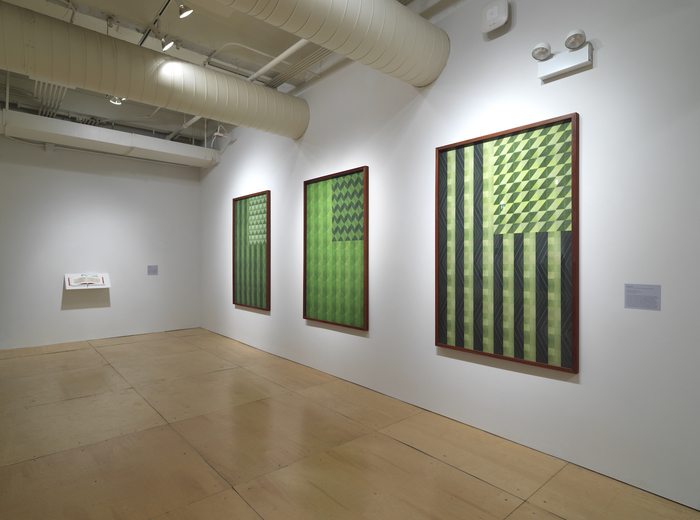 Edra Soto’s Tropicalamerican (2014) illustrates the process of cultural translation across visual and material languages. A Puerto Rican artist based in Chicago, Soto uses a symbol of national pride, the flag, to demonstrate representations of American, Puerto Rican, and Chicagoan identities. Soto crafted these flags using tropical leaves from Robert Rauschenberg’s Captiva terrain during her Robert Rauschenberg Foundation Residency in the summer of 2014. The ephemeral nature of the leaves contrasts the imagined permanence of national sovereignty. Yet, Soto translates her materials further, photographing the quilted flags and reconfiguring them into a digital format. On the south wall of Gallery 400, three framed screen-prints on paper look like green renditions an American flag. Following a complicated lineage of patriotic art traditions, including the practices of Rauschenberg, Jasper Johns, and David Hammons, Soto amalgamates her identity into these flags, expressing her experience of place and migration. 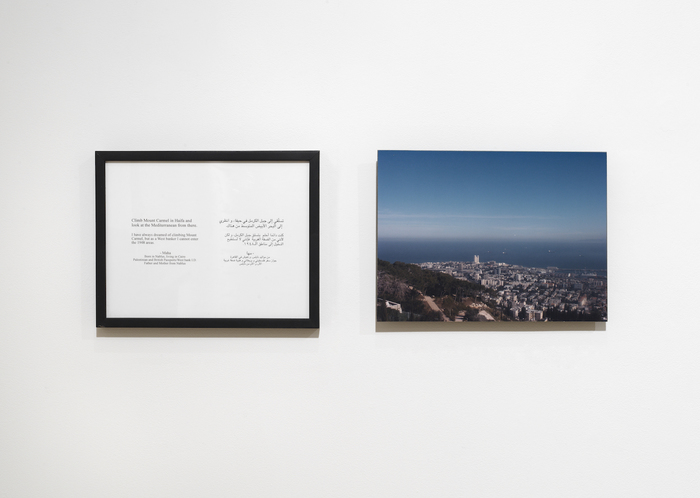 Emily Jacir, Where We Come From (Maha), 2001–03, Framed laser prints and c-print mounted on cintra. Installation view in Traduttore, Traditore at Gallery 400, 2017. Courtesy the artist and Rhona Hoffman Gallery, Chicago.

Employing politically engaged conceptual techniques, Emily Jacir’s work brings together questions of identity, place, and access in an asymmetrically globalized world. In Where We Come From (2002–2003) Jacir asked Palestinians in exile what she could do for them anywhere in Palestine, leveraging her own privileged freedom of movement as an American passport holder. She documented the wishes and the performed activities in photographs and texts. The piece, comprising some 30 wishes was originally commissioned for Al-Ma'mal Foundation for Contemporary Art, Jerusalem, and then exhibited in the 8th Istanbul Biennial. In Istanbul, these wishes were lined along the wall of the Tophane-i Amire Art Center, a former 15th-century Ottoman cannon foundry. Wishes ranged from “Go to Haifa and play soccer with the first Palestinian boy you see on the street,” to “Drink the water in my parents’ village,” or “Go to my mother’s grave in Jerusalem on her birthday and place flowers and pray.” Yet, coming from people displaced by war and exiled by the Israeli state, the wishes met a sour coincidence when displayed in the space, once a weapon foundry to the empire, which occupied the lands owned by the Palestinians. At Gallery 400, the presentation is different: the venue lacks this extra contextual weight, and only one of the wishes is on display. Nevertheless the solitary text, “Climb Mount Carmel in Haifa and look at the Mediterranean from there,” complemented by a photo of the Mediterranean from Mount Carmel, is enough to illustrate the fragmented personal histories, sorrows, and longings of people in exile.

Many works make the visitor consider the bitter side of migration and diasporic and transnational communities. Michael Rakowitz, in his The Flesh is Yours, The Bones are Ours (2015) installation, originally commissioned for the 14th Istanbul Biennial, echoes the forgotten and painful history of Armenians in Turkey. The title comes from a Turkish saying, used when an apprentice is given to a master. As a tribute to the lost skills of the Armenian minority, Rakowitz, made molds, casts, and rubbings of ornaments made by Armenian Art Nouveau craftsman Garabet Cezayirliyan, which are visible today as embellishments embedded in Istanbul architecture. Rakowitz displays these relics alongside dog bones excavated from Sivriada, one of the Princess’ Islands in the Marmara Sea. In Byzantine times, Sivriada was used as a place of worship and a prison. Now it is famous for the 1911 “Hayırsızada Dog Massacre,” in which authorities ordered stray dogs from the mainland to be exiled to the island. Around 80,000 dogs were killed, mostly due to hunger. The state did its best to exterminate these human and animal populations, but Rakowitz reveals how material traces of unwanted and exiled populations impact the landscape to this day. 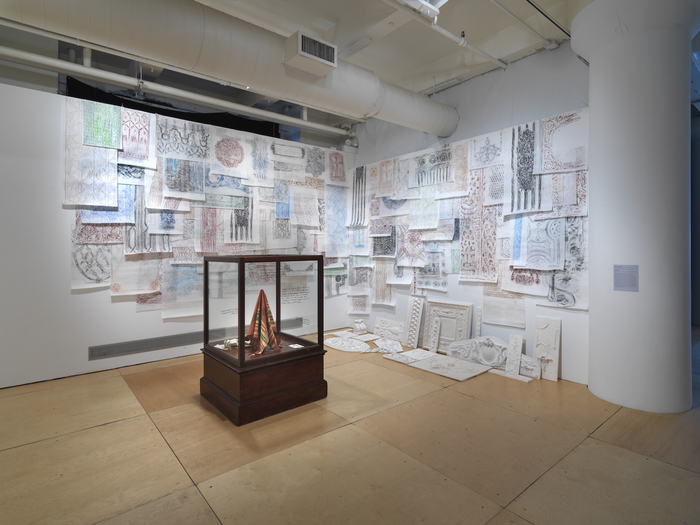 Michael Rakowitz, The Flesh Is Yours, The Bones Are Ours: Architect as Dragoman, 2015, mixed media. Installation view in Traduttore, Traditore at Gallery 400, 2017. Courtesy the artist and Rhona Hoffman Gallery, Chicago

Like Jacir’s work, Rakowitz’s installation changes from one venue to the next. In its original Istanbul guise, covering a floor in the Galata Greek Primary High School, Rakowitz included vitrine displays referencing Louis Sullivan’s quest for a new architectural language in Chicago—drawing parallels with the Armenian architectural ornamentation and modernization projects in Istanbul. This work later traveled to the artist’s own city, Chicago, where it was displayed between the Graham Foundation and Rhona Hoffman Gallery. Now, in an abbreviated form in Gallery 400, it is transformed once again by the contingencies of space and curatorial scope.

The curators of Traduttore, Traditore argue that “designations of nationalities are inherently fraught at a moment when identity can be exclusionary, or worse, used as a weapon.” At a time when “Muslim bans” masquerade as national security protocols; when the president of the United States claims the city of Jerusalem as the capital of one people, but not another; when the complexity of identities in diverse nations are whitewashed for political expediency, it is crucial to consider the wide-reaching armatures of power and how these relate to language, culture, and commerce. Translation has always been a force for both creativity and destruction. The artists in Traduttore, Traditore ask: who wields the translator’s pen, and what is lost in messaging by the most privileged and powerful among us? Picking up that pen themselves, they reveal that the answers aren’t trivial—they have real-world consequences on the movement, identities, and lives of people around the globe.