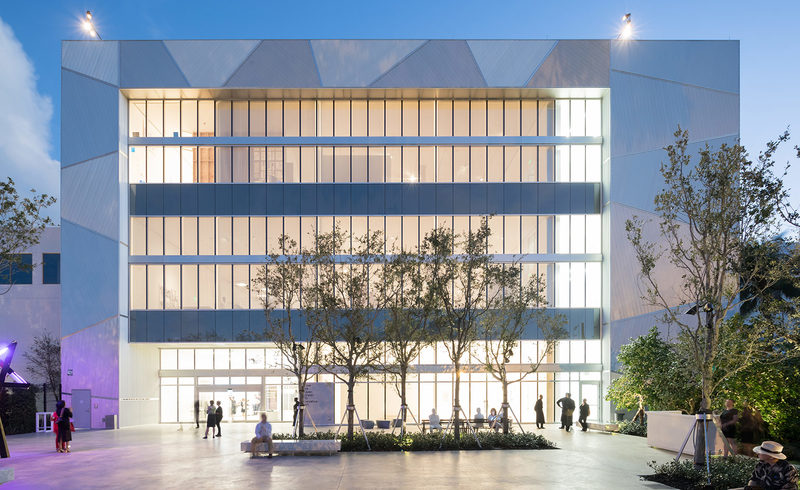 With Billionaire Backers, Miami’s Museums Go All In for Contemporary Art (and Little Else)

For the first two weeks in December the international art world descends upon Miami Beach for some of the most hotly anticipated art fairs in the world, where buyers, gallerists, artists, and hangers-on come to mix, mingle, and cavort. Thanks in part to Art Basel Miami Beach, the city’s institutional landscape has undergone a dramatic transformation in the last several years. For a town that sees dozens of fairs come and go each December, the burgeoning museum scene—the cultural stalwarts that stick around after the convention center empties and beachside pavilions come down—could be considered a better reflection of Miami’s local culture and values. Who are the newcomers to this scene? And are they shaking off the glittery patina of wealth and privilege that the fairs leave behind?

In the past five years the introduction of the Perez Art Museum Miami (PAMM), the Institute of Contemporary Art (ICA), and newly renovated Bass have ostensibly transformed the cultural landscape. Still, these young and re-branded institutions face a number of hurdles including complicated private-public financing structures and repetitive “international contemporary” programming; not to mention they are all vying for the same donor base—competing for attention amongst themselves, not unlike the explosion of fairs which they might otherwise counteract. 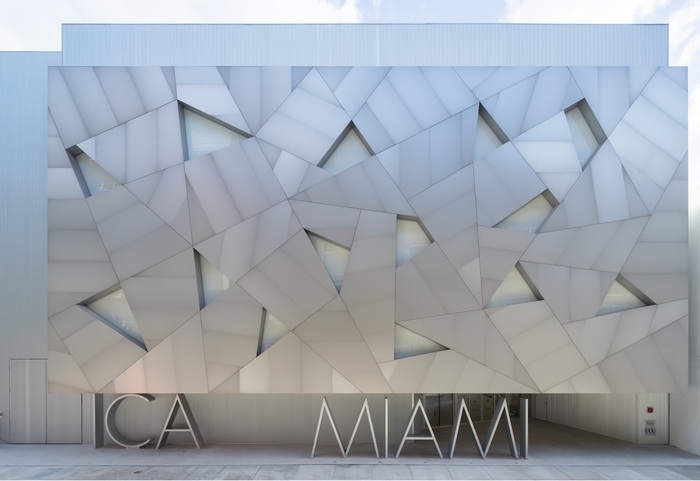 The most recent addition to the scene, the ICA, inaugurates its new home this month, right in the heart of the Design District. Its placement, between upscale boutiques from international fashion brands is a testament to Miami’s current institutional landscape. Born out of the Museum of Contemporary Art (MOCA), the ICA was formed when disgruntled board members took the bulk of MOCA’s private collection to start their own museum. In partnership with Craig Robins—one of Miami’s top real estate developers, responsible for radically transforming the Design District—and Norman Braman, a local car-dealing baron worth an estimated $2.5 billion according to Forbes, plans for a new building were drawn.

While Robins temporarily housed the museum in the Moore Building, Braman provided the funds ($75 million in cash and donated land) to construct a permanent facility right around the corner. The glitzy structure, designed by Aranguren & Gallegos, is a far cry from the museum’s MOCA roots, as a small museum serving an underprivileged local community in North Miami.

“ICA is unique in our city because we are a free art museum open to all,” explains newly appointed ICA Director, Ellen Salpeter. “Another thing that sets us apart is that the development of our permanent home in the Design District has been independently funded without public dollars.”

The new ICA is a fixture in the Design District, capitalizing on the shifting expanse of the art world, abutting high fashion and design. “While our programmatic focus is global, we view the Design District as a natural extension of our building,” Saltpeter says of the museum’s association with its high-end neighborhood, where it abuts high fashion and design. Their latest programming includes a sculpture garden with work by Sol Lewitt and Mark Handforth planted along the neighborhood’s ample sidewalks and plazas. 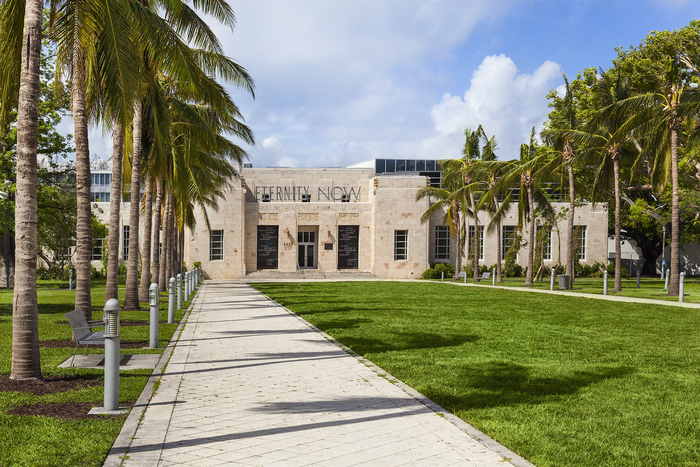 Along with the ICA, the Bass makes its long-awaited reintroduction this month. For the past two and a half years, the museum had shuttered its doors to undergo a major renovation that doubled the programmable space without altering the building’s footprint.

The Bass is housed in the former Miami Beach Public Library and Art Center, originally built in 1930 by Russell Pancoast in a grand art deco style. The building was converted into an art museum in 1964 with a massive donation of works by local connoisseurs John and Johanna Bass. Their collection of old master works was noted to be one of the most fraudulent in history, with Picasso himself labeling one of his pieces in the collection “faux” in a letter to the Art Dealers Association of America.

Last year, curators were planning a grand reopening with exhibitions by Ugo Rondinone, Mika Rottenberg, and Pascale Marthine Bayou in time for Art Basel 2016. Plans were postponed for Art Basel 2017, with organizers citing construction delays due to preservation concerns related to the historical structure. 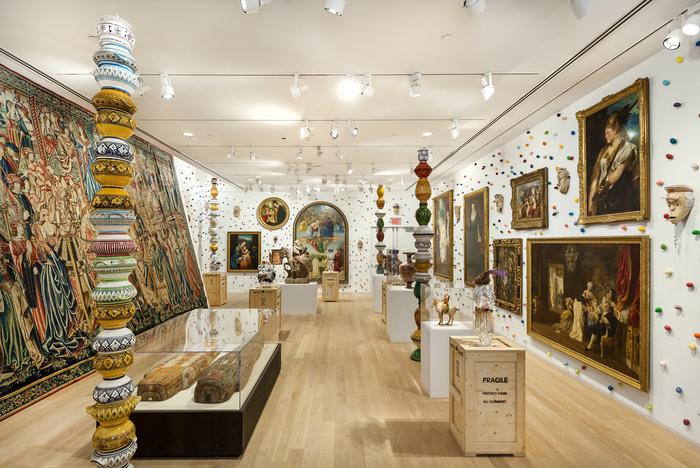 Unlike the fully private ICA, the Bass is a public-private partnership with a taxpayer-funded budget and a private board responsible for covering $3.5 million in yearly operational expenses. Despite its slightly more democratic organizational structure, the Bass wouldn’t exist today without help from its own philanthropic billionaire, George Lindemann. He spearheaded the museum’s massive renovation, and as president of the board, he oversees its finances, helping the small institution raise cash from a shrinking donor pool. Not only does the Bass compete against the ICA, but several years ago a new competitor came on the scene.

In 2013, the Pérez Art Museum Miami (PAMM) made its Art Basel debut with a spectacular home designed by Herzog and de Meuron, ideally situated at the mouth of Biscayne Bay. Opened to the public in 1984 as the Center for the Fine Arts (CFA), then later the Miami Art Museum (MAM), the institution took its newest name after one of the town’s top real estate developers, Jorge Pérez, of the Related Group, donated substantial money and artwork from his private collection to support the institution at a seminal period in its history. In addition to the $100 million used in taxpayer funds, the billionaire offered $20 million in cash and another $20 million in art to prop up the new museum. 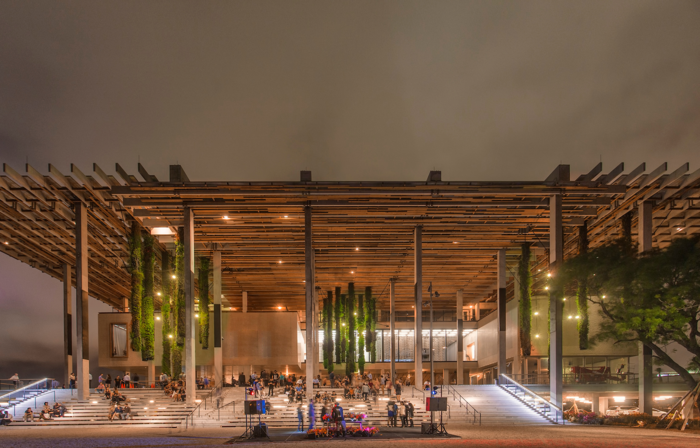 The museum’s rapid growth, however, led to a budget crunch. As the New York Times noted in a recent article about Miami’s competing contemporary art museums, “PAMM’s 2015 tax return, the most recent period publicly available, shows it ended that year with expenses exceeding revenue by nearly $5 million.”

PAMM took a major shift in fall 2015, with the appointment of Franklin Sirmans as its new director. The former department head and curator for contemporary art at the Los Angeles County Museum of Art (LACMA), Sirmans vowed that PAMM would commit itself to serve the local community by highlighting work by artists from Latin America and the Caribbean, demographics typically overlooked by the art establishment.

PAMM has indeed mounted many strong exhibitions sticking to this goal, such as last year’s Julio Le Parc blockbuster Form into Action. Yet, PAMM, ICA, and the Bass all largely feature programming dedicated to international contemporary art of the sort that draws crowds to Art Basel each year. What’s particularly glaring is the lack of an art museum committed to showing old masters and Modern art.

Museums have a profound effect on a city’s culture; pieces they acquire and exhibit project and shape perceptions of the local culture around the world. Miami is known as a haven for the buying and selling of contemporary art, so it’s no wonder the city should have one, or even two, institutions devoted to attracting top names in the field from around the world. The ICA alone has mounted the first US shows for artist like Thomas Bayrle, Alex Bag, and others—acquiring and commissioning original pieces for their permanent collection in the process. The Bass mounted the first retrospective for Italian-born Rondinone, and commissioned Miami Mountain, a highly Instagrammable outdoor sculpture in the vein of his site-specific installation Seven Magic Mountains in the Nevada Desert. Fantastic artists and artworks, all. But they do little to introduce homegrown practitioners or craft a unique Miami identity that exists outside of the city’s reputation as a destination for art world jetsetters. It’s hardly a coincidence that the Zurich and New York-based Galerie Eva Presenhuber is featuring a huge, open-plan booth dedicated to Rondinone at Art Basel Miami Beach this week. 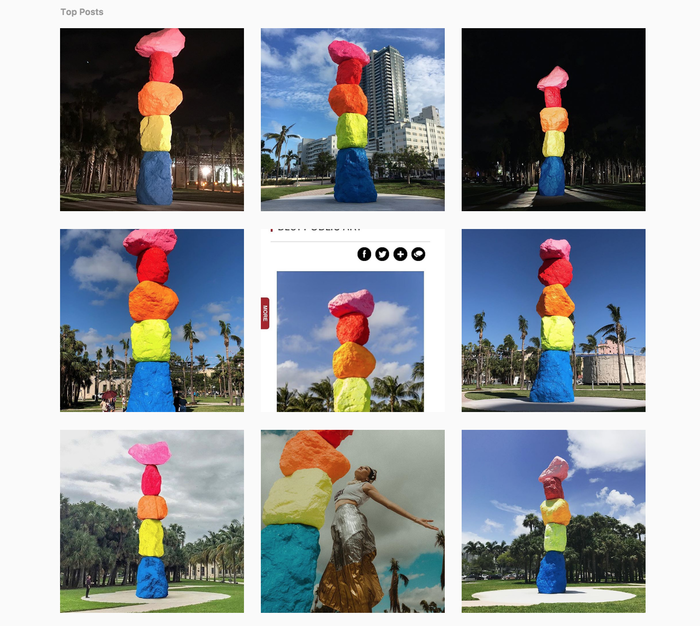 In many cases the billionaires that fund the construction and operation of these institutions play a hand in the process, and institutional identity, by way of donations. Braman donated a Lichtenstein canvas for the ICA’s inaugural exhibition, The Everywhere Studio. And in June 2016 PAMM announced the donation of over a hundred works from Craig Robins, the largest in its short history. Pieces by Jedediah Caesar, Patty Chang, Aïda Ruilova, and others formed a part of a growing contemporary art collection.

Yet, with all three museums acquiring and exhibiting pieces from the very same artists bought and sold at the fairs, they tip the scales in favor of seasonal collectors and gallerists, rather than locals.

Philanthropic support for the arts is hardly new or unique to Miami, but what is novel is the city’s reliance on a handful of powerful billionaires to bankroll so many public museums covering the same art historical time period. The dearth of fully taxpayer-funded institutions not only creates a lack of public oversight and accountability, but begs the question: whom do these private institutions serve? Though directors and curators would insist they’re programming with an eye towards the local community, the reliance on private capital would suggest otherwise.