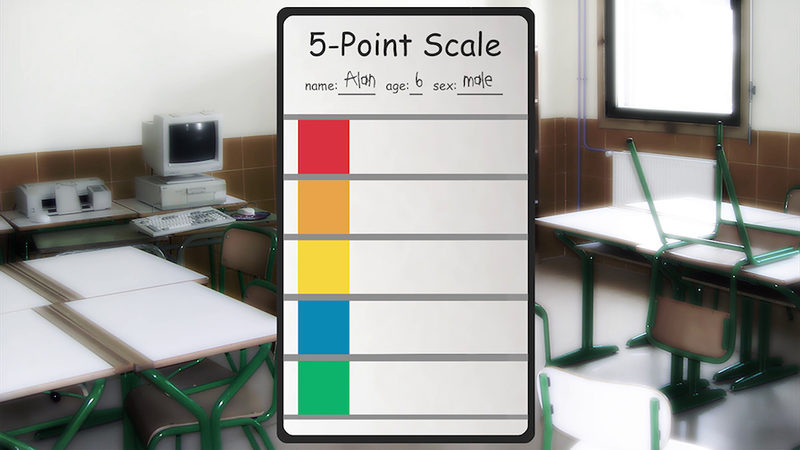 [intensifies], Andrea Crespo’s video installation, which opened at Kraupa-Tuskany Zeidler during Berlin Art Week, runs for one hour. It has a linear plotline, with silent dialogue written over the image. The aesthetics are sparse; the film flickers through still shots of institutional interiors, revealing an interrogation in which the minds and bodies of people with autism are charted and managed by the State. In the gallery, the artist emphasizes this bodily control with clinical and military sensibilities, installing a site-specific graph of a five-step anxiety scale, repurposed from the Homeland Security Advisory, that is now used in special-education programs. Nine drawings accompany the installation.

The video was first shown at List Projects, MIT, in 2016, and its main character, Alan, is a composite of different autistic individuals Crespo has encountered in life and fiction. [intensifies] follows Alan as he receives various diagnoses, as he grows up and visits a series of psychologists (the main playground of his life), and as he is instructed, or rather, pressured to be synchronized with other children. Alan often falls into silence, submerged into rapture by shooter video games, the powder on ranch-flavored potato chips, puzzles, and cryptology. Over the course of the film, set amidst a backdrop of post-9/11 surveillance hysteria and tightening national borders, the viewer questions Alan's construction as both a future enemy of the United States and an outsider to his community.

[intensifies] analyzes the stereotypes surrounding autistic individuals as characteristically taciturn, as being almost inhuman, mechanical. Ironically, the pressure to become more human pushes the disabled body further into the wrenching gears of the cybernetic machine, leading the audience instead to the realization that they, too, are part of its rotations. 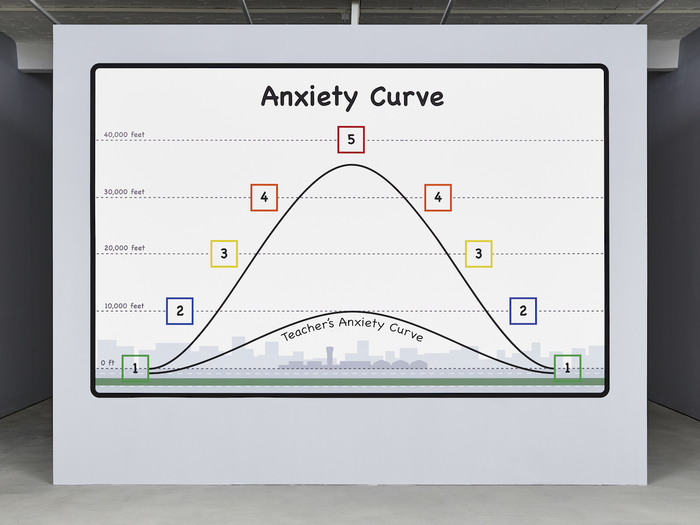 Vanessa Gravenor: I was struck by the banality contained within the film’s scenography; to me, it appeared reminiscent of scenes from Middle America, middle-class white institutional settings.

Andrea Crespo: The images are mostly drawn from Wikipedia Commons. I thought it would be appropriate to use these sorts of images as Wikipedia contributor’s are disproportionately on the spectrum. These images exist as banal reference points for that relationship. There is a growing cultural association between the repetitive indexical tasks of information entry and autistic laborers who are often working for free. People seem to believe that autistic people are especially privileged in our technological milieu, but this is overstated, as only a minority of us are getting paid to work in the tech industry (overall, we experience higher rates of unemployment). 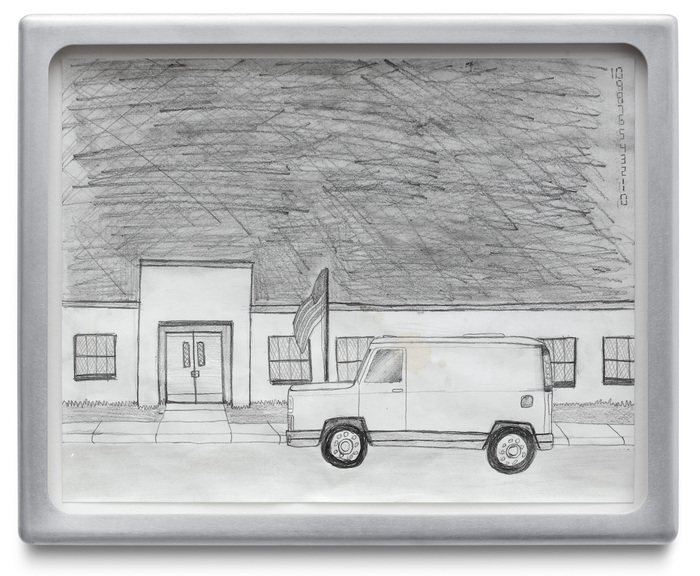 VG: There’s something odd in these types of medical spaces which dominate the scenes in your video; there is a sensory overload even though it is an extremely flat, null environment. It could often be conflated with something mystical, though it often feels like a non-place or junk space architecturally. Something very strange happens when your body enters the cybernetic circuit we call the medical industrial complex.

AC: Definitely. I sometimes myself err towards a depressed affect that neurologically normal people like to characterize as “deadened” or “machine-like” (I, myself, was diagnosed with Asperger Syndrome in 2005). Since the middle of the twentieth century autism has been linked to cybernetics and machinery, and these linkages were forged through the sciences as well as cultural representations. This is partly why this dehumanizing “deadness” gets misattributed to our behaviors and social illegibility.

I think that is one of those things that is interesting and particularly disturbing to me: how people generally tend towards metaphorization of disabled people’s embodied experiences; and this occurs in mass media as much as contemporary art, most often to our detriment. In [intensifies] I invoked many of these common metaphors in order to test and break them if not channel our symbolic potential in service of autism advocacy. I take special care to do this in a way that does not mask our humanity or turn us into flat objects that solely exist to reflect on social or technological conditions. We are more than that: we are not machines, we are human beings who are more often than not in pain and isolation. 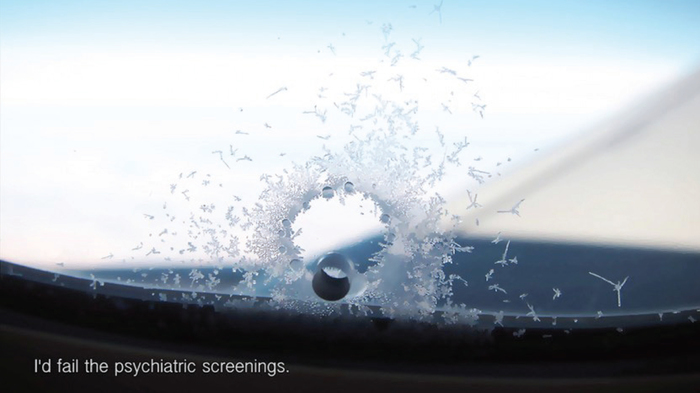 VG: These adjectives like “deadened” or “machine-like” lead the main character to become a type of enemy because of alienation or being perceptually on the margins. I think this plays into the grander narrative you’ve set up where this type of enemy or these drives are being created through different technology and social circuits the character encounters. Different events happen through the course of the film like the announcement of 9/11 as well as classroom lockdowns due to a suspected shooter. Alan is prompted to wonder if the others think he in fact is the assailant or the enemy to the so-called domestic American State.

There’s a historical connection to Alan Turing, who shares the same name as the main character Alan. Turing was highly skilled mathematically, a founder of computing technology, an agent of the state, and yet became an outlaw character at the end of his story. Why did you choose this as a foil for your present-day narrative?

AC: I think it’s a combination of the historical narrative and also the personal. When I was in middle school I went to group therapy and one of the people in group therapy was named Alan. He was autistic and into computers.  He was also scapegoated and expelled from his school because of his errant behavior. This is a bit of a coincidence. Alan is sort of a composite of myself and other autistic people I’ve personally met if not just encountered online. Sometimes we do align with those stereotypes but perhaps not in the violent ways that people expect. With Alan Turing, his alleged social clumsiness and technological prowess has turned him into a symbol of the post-WWII alignment between autism or the autistic body and “cybernetic subjectivity.” Brutto Bettelheim was a psychoanalyst who did work in the post-war era and was one of the first people who wrote about this connection with Joey “the machine boy,” a patient he, perhaps errantly and violently, turned into a metaphor to advance his ideas about industrialization and warfare’s effects on humanity. 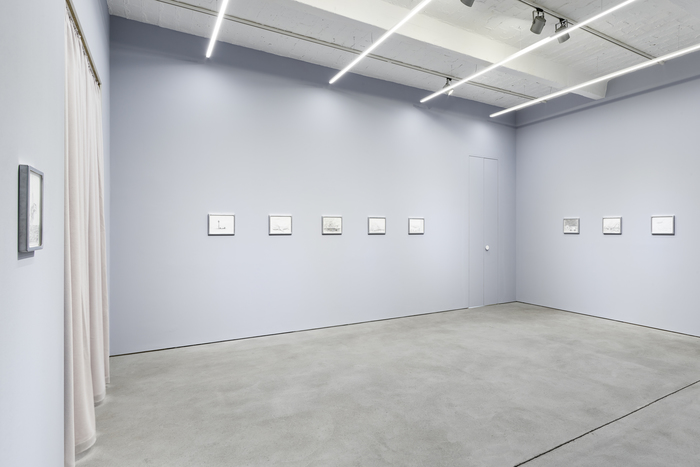 VG: Turing is an important figure because of cybernetics but also because of his writing, which in turn influenced post-human discourse as we know it today through people like Rosi Braidotti and N. Katherine Hayles, who in some part built on his work. Ironically the cybernetic circuit that Hayles talks about in How we became post human proves to be a closed loop; everybody is part of its circuit—there is no exit. Paradoxically it is in your film that one really notices that the “norm” or perfect model turns out to be a machine, an anxiety scale formulated around the anxiety generated by terrorism and airplanes.

AC: Definitely. The enforcement of compulsory able-bodiedness assumes the expectation that the body will perform as a well-functioning machine amongst a world of machines. 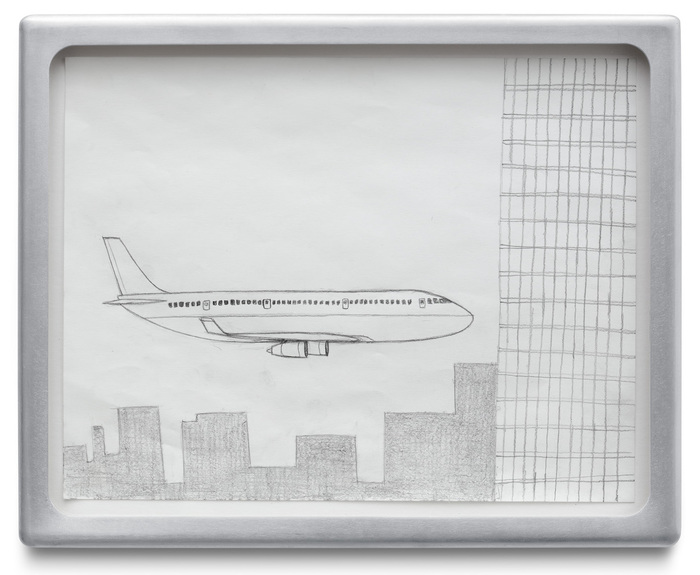 VG: Why did you use 9/11 as the major demarcated event of the film?

AC: I think there are two events that really shaped national affect at the turn of the millennium towards anxiety, fear, and risk-preparedness. That was Columbine and 9/11. These events created a generalized tension and expectation that there will be violence at any place at any given time. The homeland security scale was adopted as a mechanism against terrorism. In my research I found that this scale has been adopted by some special education teachers to manage the affect of the autistic body, which becomes a microcosm of the national body and the management of its affect.

Again, in invoking the autistic body as a “machine,” Alan conceives himself as an airplane that at any given point might be neurologically “hijacked” and be subject to behaving unpredictably. In such an atmosphere of anxiety and fear, someone like Alan sets off alarms and red flags, regardless of the probability of actual violence occurring. 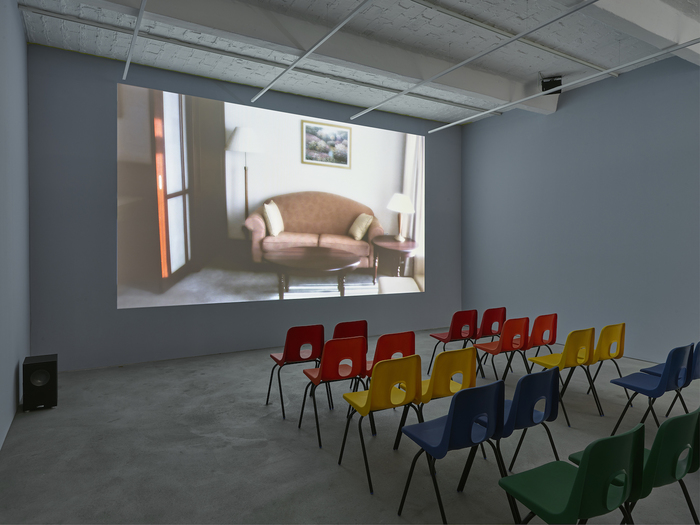 VG: The video is installed with seats that have been acquired from the MIT List Projects. The colors of these seats reflect the anxiety scale, the range from 1 to 5 that was purposed from the homeland security scale. The humorous implication is that the viewer is supposed to rate their anxiety while watching the video.

AC: I was interested in how a student’s body could be indexed through color-coding just as citizenry and its affective/emotional states can be indexed through a color system. I wanted to concretize that in a specific way—especially how in educational environments where you more severely see the sorting of people based on the ability of people. And really, not just ability, but manageability and co-operability. 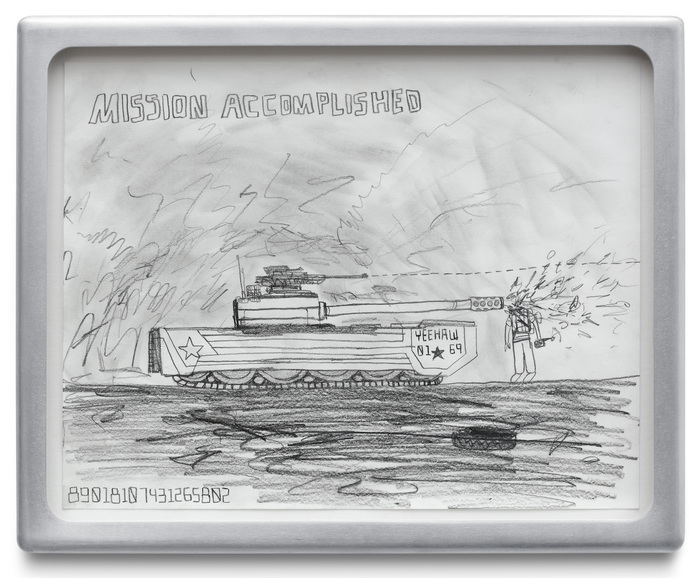 VG: There’s one scene in particular that I wanted to touch upon. Through the course of the film, you find out that Alan likes to play video games. There’s an uncertain dialogue that challenges the groundedness of perspective, particularly in the film’s shooter simulation game sequence. I began to try to analyze the dimension of realness of the sound. Are the gunshots coming from the game? Are they coming from somewhere else?

The dimension of realness, or the gaming aspect that violence tends to have today is well-trodden terrain for artists such as Harun Farocki, who perhaps did the most work to analyze the relation the video game has to the actual training simulations armies use. His work has essentially proven that there is no “real” violence. Everything is simulation. So why don’t we kill in game? Or rather, in order to wage war now, why do we have to first establish reality as fiction?

AC: Again I was really trying to touch on these cultural associations that everyone sort of knows but we don’t know where they come from. I think it is the connection between video games and mass shootings; the connection [to the autistic or otherwise neurologically deviant individual] has been forged since Columbine. Mass shootings and video games have triangulated with mental illness. There is an actual real connection, as you said, with the military industrial complex and entertainment industries but they assume that the player is someone who is normal and has a nervous system which operates normally and can create a barrier between fiction and reality, etc.

There are certain toxicities in the environment that are integral to the smooth cybernetic functioning of our defense and entertainment industries. However, the neurologically deviant person becomes like a wrench in the works, or perhaps, they are conceived as always having the potential to act as “glitches,” to use a computational term. As a result, the same cultural products that are supposed to breed soldiers who channel that violence outwardly and abroad in service of the nation-state can go “autoimmune” and channel that violence within a domestic context.

It is this characterization of vulnerable and disabled individuals that creates an atmosphere of anxiety-induced scapegoating and exclusion. The reality is that people with mental illnesses are more likely to be victims of rather than perpetrators of violence and aggression.

Vanessa Gravenor is an artist and critic living in Berlin.