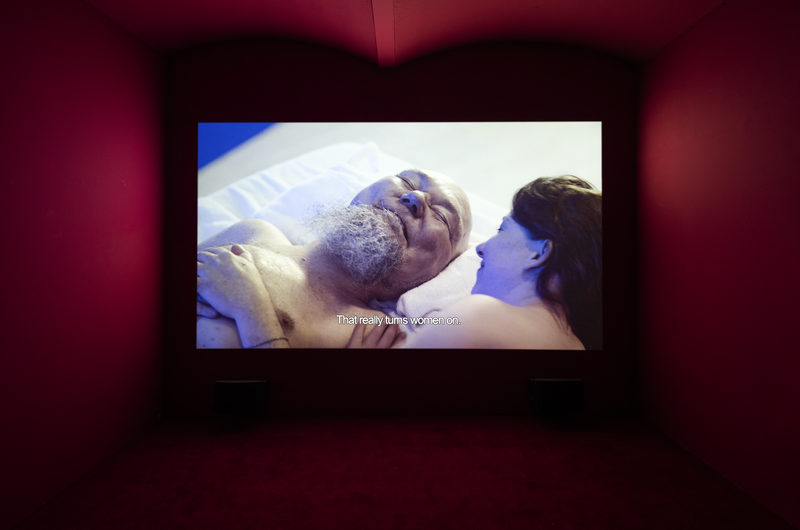 Drill Camp: Ingo Niermann Is Assembling an Army of Love

On a rainy afternoon in Berlin, during the latter half of Berlin Art Week, I met with writer and artist Ingo Niermann to discuss his new project about bringing love, sex, and intimacy into the realm of social justice—ideas put forth in his novel Complete Love and the film Army of Love, commissioned and co-produced by the 9th Berlin Biennale.

Complete Love is the latest edition in the Solution Series, an exercise bringing together experimental proposals and fiction to respond to the pressing needs of contemporary society. Solution 9, for example, addresses the dearth of land for proper body burials in Germany with a proposal to build a monumental mausoleum modeled after the Great Pyramid in Giza. Complete Love, on the other hand, identifies a problem which is much more ephemeral and embedded in social psychology: contemporary desire. Niermann asks who is left out of typical desire structures, which are often fed to the masses through advertising in shiny, affinity-based, concealer-laced exteriors. He links the culture of infinite swiping on Tinder to an embedded cultural evil that can be traced back to German fascism and enlightenment values. Could the way we connect and love today ultimately have sadistic repercussions on sexuality and the body? 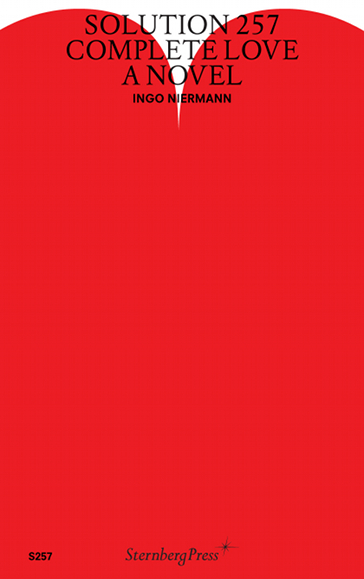 Solution 257: Complete Love is a novel about “completism,” a word Niermann has fashioned to mean something akin to a sexual preference or philosophy, like polyamory, but with a social and political dimension. Completists, according to Niermann, “aspire to social justice through intimacy.” It is a tactic where people have sex and share love with those society has determined to not be overtly desirable: paraplegics, the elderly, those with minor or major deformities, or those who are mentally incapacitated. Practitioners in the novel believe “the redistribution of material wealth includes equal chances of finding sex and love—no matter how elderly, disabled, or ugly you are.”

The book, set in Berlin in 2011, is told from the point of view of Karl, a middle class German man in his late 20s who is in a failed long-term partnership. It begins with a Skype call he receives from an American expat, Ava. She tells him she only has three hours to live and propositions him for sex. The eccentric Ava speaks to him about the parameters of intimacy, romantic bodily love, but also the melancholia that relationships can bring.

Karl, a stay-at-home dad, is transfixed by Ava’s spontaneity and audacity. They meet, have passionate sex, and Karl gets pegged on camera. After this liaison, Ava reveals that her real intention is to become a completist and seek out those in need of love. In her shabby Neukölln apartment, Karl begins investigating completism, intrigued by the prospects of widening his prudish, sexual horizons.

There are some real world precursors to Niermann’s fictional movement. The book discusses the Soviet free love advocate, Alexandra Kollontai, a figure in the Bolshevik revolution who talked about affect as a political tool, and Matthias Vernaldi, a contemporary disabled sex advocate. Researching for the novel, Niermann conducted several interviews with Vernaldi, who was born with spinal muscular atrophy. Oskar, a character in the book modeled on Vernaldi, talks in depth about his experiences in Eastern Germany in a free-love commune between disabled and able-bodied people. He explains how the commune was seen as an extension of communism and served as a means to reconfigure normative social structures.

Complete Love is set in response to the evils of history. In Nazi Germany, non able-bodied people and mentally incapacitated individuals were exterminated through euthanasia. Completism, then, is an active tactic, a labor, against fascism: “the German Nazi past will only be overcome if we solicit physical love not only from the young, strong, and beautiful, but also from those that we discriminate as elderly, disabled, and ugly,” declares the book cover’s provocative blurb. Niermann links the continual othering of these “undesirables” to the seeds of fascism, but moreover, draws attention to the fact that those with disabilities have sexual desires and needs too. Completism fights a cultural norm that treats the disabled as less than adult. 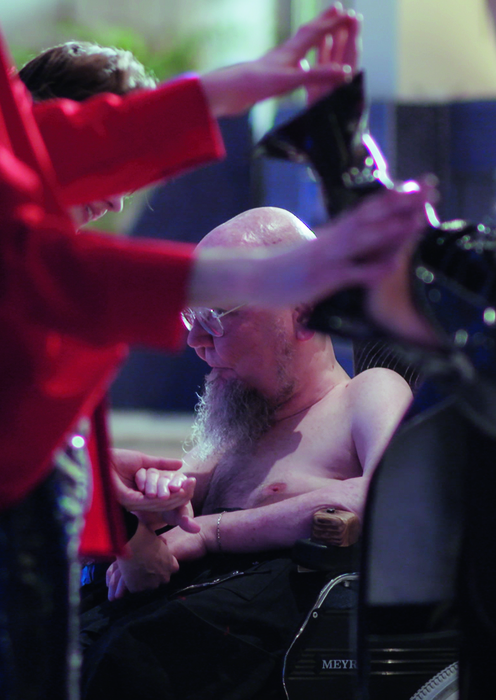 Niermann’s project is not just fictional musings. It aspires to become a movement, with actual happenings where such sex-tivism would take place. Niermann’s second iteration of his “solution” takes the form of his film project, Army of Love, a type of documentary within a pseudo-fiction reality (you can currently watch the full film here). In this collaboration with filmmaker Alexa Karolinski, the artists question how to represent love, desire, and vulnerability. What initially sounds clichéd and hackneyed, something one is fed in a self-help magazine, is in fact a complex and moving video meditation on the corpus. In a staged happening, prostitutes, disabled people, and other participants discuss their experiences with sexual and romantic love.

The sound hits you first, a score full of subtle noise and synthesizers. Then the color: the video is set in a pool, a spa-like setting. Rather than the video being a construction of love, it is instead a deconstruction, probing into the difficult notion of desire and how denial of the aging or disabled body ultimately leads to lonely contemporary existences.

One scene focuses on a young woman whose muscular disability has affected her speech. “Unfortunately we live in a society that is only about beauty and performances,” she says. Her speech is broken; she stretches her words out and they quiver with vulnerability and humility. In another scene, an older woman is caressing a man. They sit on the sill of the swimming pool, their legs dangling in the water. The woman talks about how her body is drooping, how she is growing hair where hair shouldn’t grow, on her face and neck. She then gets at the core of the project: “Army of Love, as if you had to struggle with love, as if love were a struggle and it only gets harder…Your tissue doesn’t play along forever. It’s that simple.” These women both speak to the phenomena of living and aging in a society full of physical ideals, where love is something constructed, like a game, where one has to fight in order to piece together some type of warmth. 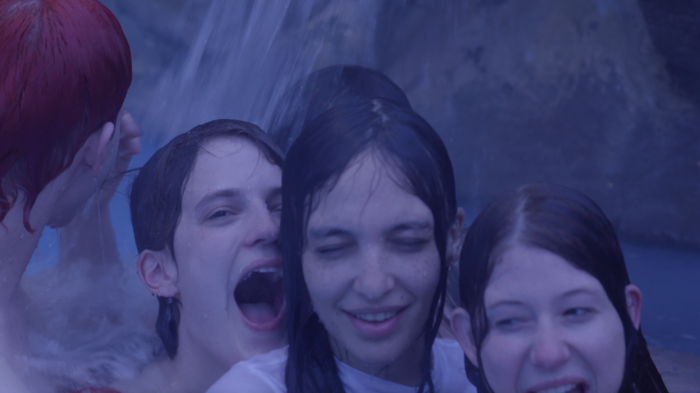 Camp, in Susan Sontag’s words, “is a vision of the world in terms of style—but a particular kind of style. It is the love of the exaggerated, the ‘off,’ of things-being-what-they-are-not.” She continues: “[Camp] consists in going against the grain of one’s sex.”

The notion of “army” in this project, the struggle the fight, is precisely this. Niermann put it this way: “today, camp is extremely appealing as it enables you to enact strong expressions even though being basically undecided… the solution would be to use camp as an approach to establish new routines and rituals—as a good routine or ritual works no matter if you believe in it or not.”

When I probed further, asking if camp was just a type of sarcastic tricksterism, Niermann responded: “Sure, you can be camp with sardonic intentions—or you can be sardonic in a camp way. But you can as well act in nothing but sweet adoration.” He proposes we embrace what is off, work against the grain, and most importantly fight for some type of other togetherness. He seems to imply that changing a norm is as simple as acting out a transgression: sincerely or not, the chores still get done.

Vanessa Gravenor is an artist and critic living in Berlin. She is a DAAD (Deutscher Akademisher Austausch Dienst) scholar from October 2015 to December 2016 and a candidate for a Diploma in the class of Hito Steyerl at Universität der Künste, Berlin.