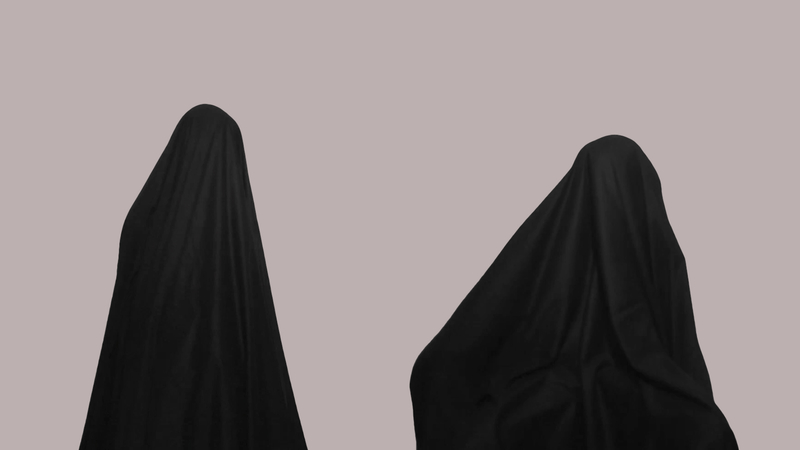 From the Harem to the Revolution: Worn Out Images of Middle Eastern Women in Art

Two chador-clad figures gesticulate with fully covered arms onscreen at the rear of Carbon 12, a gallery in Dubai. It would be easy to yawn and dismiss Anahita Razmi’s video, Middle east coast west coast (above), as yet one more work in which an artist covers Middle Eastern women’s faces and bodies to insinuate that they are voiceless. That assumption is turned on its (veiled) head, once one picks up a set of headphones to listen to the work’s sound, which reveals that the performers are actually a male and female couple bickering about stereotypes associated with west coast and east coast artists in the United States. It turns out that Razmi set Nancy Holt and Robert Smithson's 1969 audio recording to the performance. 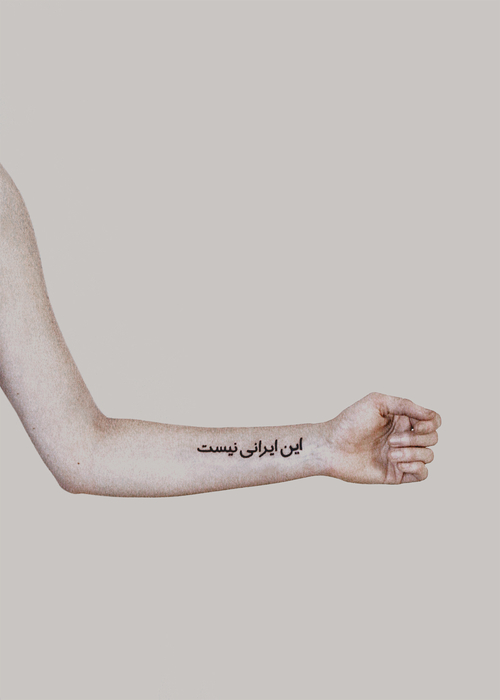 Anahita Razmi, This is not Iranian. Courtesy of the artist and Carbon 12

Razmi’s show is titled Sharghzadegi, after a made up Farsi term for "Eastruckness," which plays on "Gharbzadegi," a somewhat derogatory adjective for "Westruckness," used in Iran to describe a person who models her or himself after Western values. The exhibition concerns our predilection for labelling and branding by questioning whether terms like “The Middle East” are relevant or even mean anything. Razmi, who is half German, half Iranian, photographed a Farsi tattoo on her forearm that translates, “This is Not Iranian.” She asked in our interview with exasperation, “What is not Iranian? Is it the person or is it the sentence?” then went on to clarify, “I am making a personal statement but a non-statement at the same time. These works are labelling something but at the same time questioning what labelling does.” Razmi is suggesting that the Eurocentric notion of “The Middle East” has become absurdly vague in our globalized times, as have tired gender and cultural typecasts. 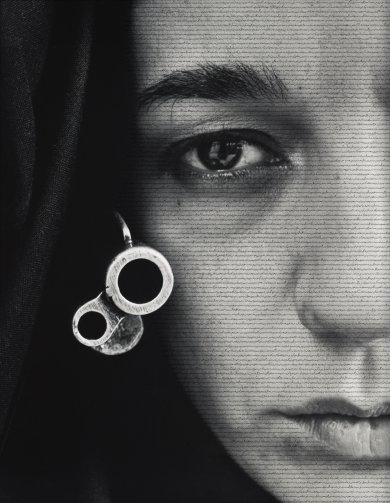 Shirin Neshat, Speechless from the Women of Allah series, 1996, gelatin silver print and ink. Courtesy of the artist and LACMA

The tattooing of Middle Eastern women’s bodies with text was famously played out in Shirin Neshat’s Women of Allah, a series of four photographs from the late 90s, which presented women in chador beside phallic weaponry, with every exposed centimetre of skin inked in classical Persian poetry, as if to imply that women—even the dangerous revolutionary variety— are the named possessions of the male religious elite. While this notion was wonderfully controversial back in the 90s, post 9/11, the equation of Middle Eastern women with violence and veils has been so overdone that artists with roots in the region look downright lazy if they self-represent female bodies in this way—unless, like Razmi, they have a fresh spin. 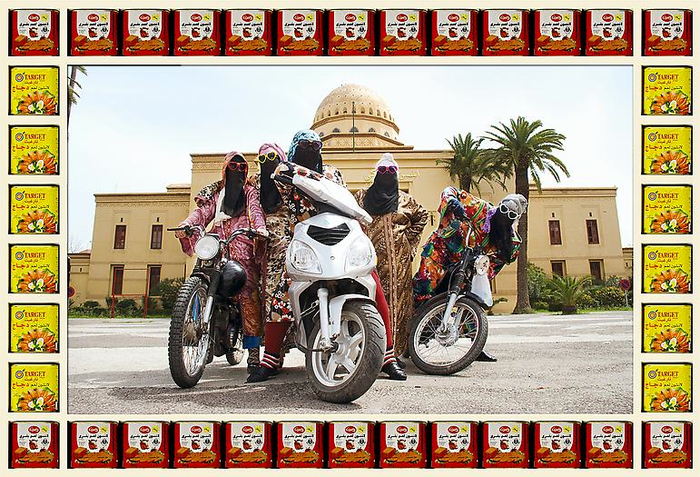 Interestingly, LACMA seems to believe that Neshat’s earlier work is both "contemporary" and an example of Islamic Art. The museum is featuring Speechless from the Women of Allah series as the promotional image for a group exhibition titled Islamic Art Now: Contemporary Art of The Middle East which includes strong work by artists including Hassan Hajjaj (whose Kesh Angels follows and documents a funky group of female bikers in Morocco), Wafaa Bilal, and Mona Hatoum. Regardless of the show’s scope, equating women from the region with guns and veils still draws crowds. It is dangerous for a powerful institution like LACMA to play into Western media stereotypes and imply firstly that Islamic contemporary art and "Art of the Middle East" are the same thing, and then to throw in such a pigeon-holed image of a woman from the region as a teaser. 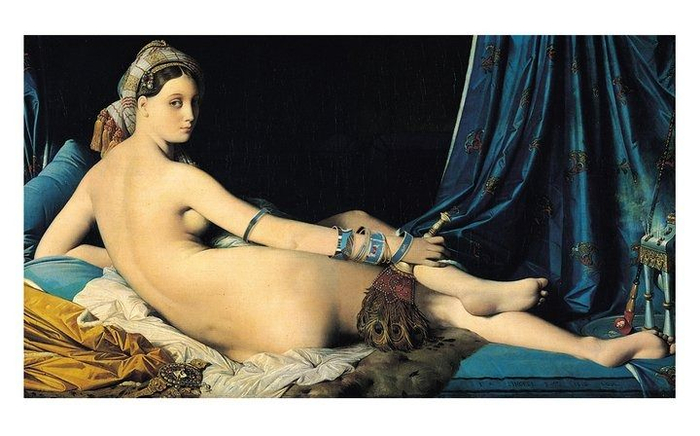 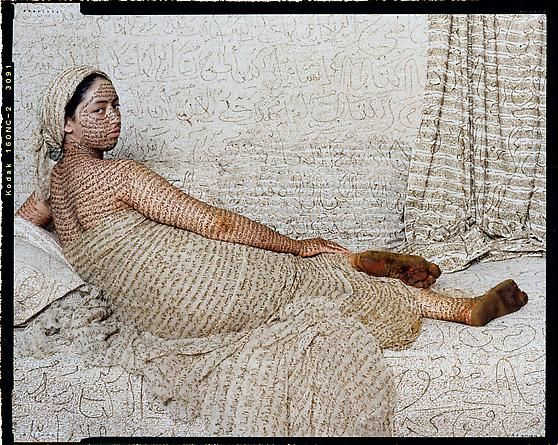 In the Orientalist era, females did not have license to represent themselves artistically, and were instead objectified by European painters like Delacroix and Ingres, whose work provided a cover for buttoned up Victorian adventurers to explore their own sexual fantasies related to the harem rather than convey a realistic window onto women’s lives. In 2008 Moroccan artist Lalla Essaydi reclaimed the harem and women’s bodies with a riff on Ingres’ 1814 painting of a nude concubine, La Grande Odalisque, in which a porcelain-skinned woman looks demurely and sensually away from the painter as though she is a decorative object. In Essaydi’s photograph by the same title in her Les Femmes du Maroc series, the subject looks fiercely into the camera as if to imply that she controls both her own sexuality and her destiny. Her body is tattooed in henna calligraphy with architectural patterns coordinating with the threshold she dominates. "Odalesque" in Turkish means "to occupy a space" and Essaydi is perhaps calling into question the ways in which Arab people have allowed themselves to be occupied by an Orientalist world view, even decades after colonialism’s demise—how women’s bodies provide the ultimate canvas, blank page, and battleground for that struggle. 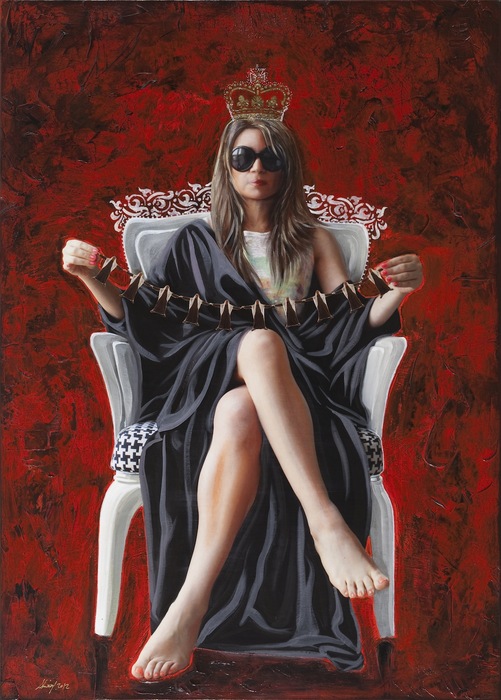 Shurooq Amin, A Man of No Importance. From the Popcornographic series. Mixed Media on Canvas. Courtesy of the artist and Ayyam Gallery

It is impossible to break down stereotypes related to women from the Middle East and art without simultaneously unpacking complex tropes on patriarchy. Kuwaiti painter Shurooq Amin whose show, It’s a Man’s World was closed within three hours of opening at a Kuwait City Gallery in 2012, is known for portraits that expose her views on the hypocrisy of her society, but also for self-portraits that portray Arab women as powerful and independent figures in a patriarchal culture. In A Man of No Importance, Amin crowns herself a queen upon a throne, unfolding a chain of tiny paper doll men in traditional dress. Amin fiercely tackles notions of masculinity, one taboo at a time, and there are a handful of other artists from the region, both male and female, who are engaged in the same on going project.