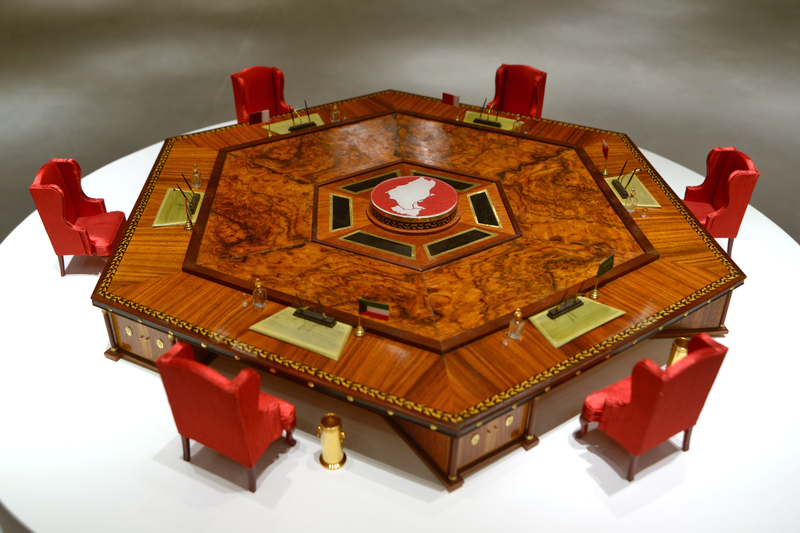 Representatives of The Cooperation Council for the Arab States of the Gulf (The Gulf Cooperation Council, or GCC in abbreviation) deliberate while seated in red silk chairs around a polished wooden table engraved in gold leaf. GCC, a collective of eight artists largely of Kuwaiti origin have installed Micro Council, a doll-sized replica of the table in the center of an otherwise empty and sterile exhibition space at Sharjah Art Foundation. The table huddles weakly beneath the glare of LED lights streaming from a grandiose gold ceiling, referencing the nondescript yet luxurious conference halls and hotels where forums, accords, or even art fairs are held in the region.

Reclaiming phrases commonly bantered among ministry officials in speeches and memorandums, GCC calls itself a “delegation,” and the members Nanu Al-Hamad, Khalid Al Gharaballi, Abdullah Al-Mutairi, Fatima Al Qadiri, Monira Al Qadiri, Aziz Al Qatami, Barrak Alzaid and Amal Khalaf convene for “summits” around the world. The group’s name—which implies that these young artists speak for their entire generation—coupled with the idea that a one-year-old collective could stage or merit a retrospective, is deliberately pretentious, and a parody on power and how it is used or misused humbly or extravagantly by decision-making bodies. 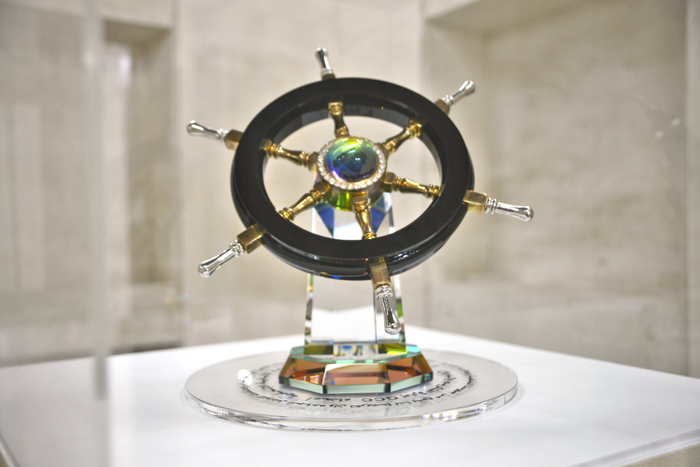 The second portion of the exhibition has been installed in Bait Habib Al Shalwani, a repurposed historic home that flanks the Foundation’s newer minimalist spaces. Step into any government minister’s office in the Gulf and expect to encounter a shelf of carefully polished crystal awards engraved to commemorate various forums and inaugurations. GCC satirizes the custom with an installation of ten awards celebrating each of the cities in which the collective has gathered since its 2013 inception. Garish cubic zirconia bedecks a replica of a ship’s wheel, while the glass base is engraved with the bumptious phrase, “Berlin Congratulant.”

The trophies draw attention to both the commercial business of government swag and to the emptiness of a group of artists or diplomats honoring one another at the conclusion of a nondescript summit that may not have in fact accomplished much of any lasting impact. This contrast between the contrived and timeless is further strengthened by a sound installation in which a female speaker blandly reads aloud the GCC's charter article by article over a loudspeaker. At times the empty recording competes for attention with the haunting call to prayer projected from the blue-tiled mosque located just next door. 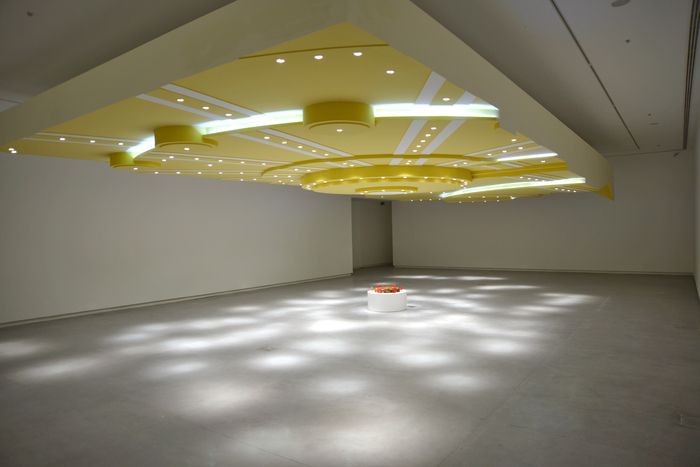 An exhibition of the same title was presented at MoMA PS1 over the summer, but the works have been rearranged here to respond to the architectural environment of Sharjah Art Foundation. The MoMA retrospective was far more provocative and displayed a series of photographs (including a mock diplomatic negotiation set in the Swiss Alps) that added an element of performance and engaged playfully yet meaningfully with various symbols and tropes of Gulf culture. One who has viewed both incarnations of the exhibition can’t help but wonder if these images were pointedly left out in Sharjah due to concerns of offending a hometown crowd. Regardless, this is an exciting and thoughtful exhibition by a group that is going places. It has been well placed at a progressive institution that is at the forefront of the emerging GCC art scene.