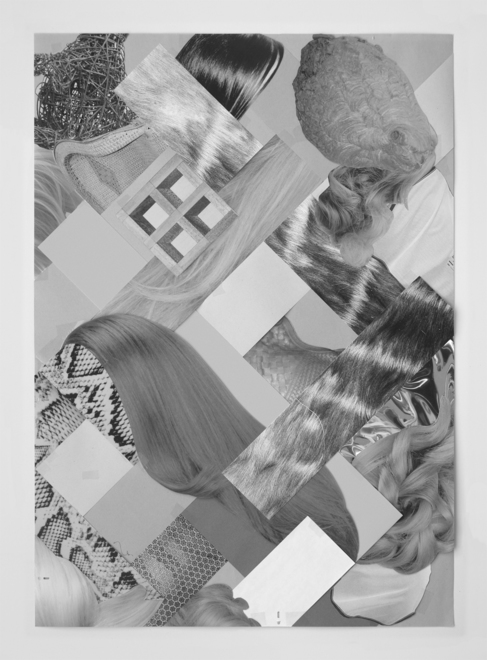 In the nascent Two Jonnys’ project space, an arrangement of photographs and objects make up Robert Filby’s exhibition, "Mood Boards." The title conjures up ideas of how we use images, text and associations to summarize a potential sensory experience. There is something nasty about this term, as though you would hear it volleyed about a corporate boardroom where the 'creatives' pitch to an ad agency. The beauty of this show however is that, as Kit Hammond suggests in an accompanying text in the form of a letter, Filby’s “versions undermine attempts to refine cultural meaning down to simple prompts". The further this show is explored, the more complicated and poetic the interconnections become between image, object and language.

Two sheets of what appear to be unfolded paper, attached to the wall one above the other, greet you outside the entrance to the space. A soft fleshy yellow tone, spray-painted atop and on the surrounding wall, infer you have interrupted mid-action. Walking past and into the space, perception is stunted, as the sheets have none of the natural fluttering anticipated, revealing themselves as sturdy fiberglass, hung from hooks. The simple action of folding and unfolding has become a concrete gesture. The solidity of this lightweight, quotidian material shifts your sense of trust as you enter the room, suggesting that nothing can be taken on immediate and individual impact alone.

Inside, five framed black and white photographs hang on the walls around a floor installation, a striated pot atop a section of placed marmoleum tiles. The images have the feel of photocopies, collages of tactile objects and low-res patterns cut and paste together - basket surfaces, braided locks, wood flooring. Joined at varying angels, tape outlines and shadows divulge the layering process. They take time, and become increasingly intriguing in terms of the relationship to the objects seen against them. Their titles are dryly humorous variations on the show title - MOO BOARD, MD BRD, MOOD BARD, MOOD BOAR, MOOD BOAD – pointing at the impact of deletion or rearrangement, how slight changes can undermine the subject entirely. Outside the gallery a plasticine sculpture of Scott E. Fahlman’s (credited with inventing the emoticon) partially smashed head, stares in the direction of the computer. The photographs distill the subtle texture and forms of all these objects, intensifying the smoothness of the pot and the fine lines of Fahlman’s beard against his flattened face.

Hammond’s text aptly raises the issue of language, its potential organic formation from seemingly valueless signs around us, and how we both share and claim ownership upon it. In this show Filby’s works function fluidly together, deconstructing the way in which we come to accept that fundamental linguistic units designate meaning. Together they elicit an intensity in their association, often lost in the midst of absent-minded daily experience. This show initiates a curious conversation, an unending exchange where, like in language and symbols, nothing is definite or absolute.

All images courtesy the artist and The Two Jonnys'