I’m Anji Marth. I was born in the early 70s, and grew up on the east coast of the US, near Philadelphia. I lived in Philly as a teenager into my early twenties. I have since moved all over the country, from the south to the southwest to the pacific northwest. I love it here and consider it home.

I work in a variety of mediums. I am a professional, licensed tattoo artist. I work in a studio in Oregon. I’ve been tattooing since the late 90s. I love tattoos, and people who get them.

I learned to paint and draw from my uncle, David Borghi, who is a painter. His work can be found in the Visionary Art Museum in Baltimore. From him I picked up my creative freedom, my willingness to try new things. I have in the years since, worked with and for many incredible artists. I’ve been very lucky to have met and known and worked with these people; without them I would not know a thing. I cannot call myself self-taught because of the many mentors and teachers I have had over the years.

I’ve previously shown solo shows at: Unfine art museum, Oak street speakeasy, The Horsehead, and Jameson’s in Eugene; Diva and Slave to the Needle in Seattle, Heaven Sent and Lux Gallery in California, and sundry other cafes, bars, group shows, and odd venues.
I’ve been published and featured in Tattoo Magazine, Skin and Ink, International Tattoo Magazine, Tattooweide (Germany), Tattoo Flash, and have been featured in or interviewed for the Stranger, Eugene Weekly, San Antonio newspaper, and have been featured in books including Electric Tattooing by Women, and Ladies in Ink. I have two books currently in print, one poetry and one tattoo and art-related.
My portfolio can be found at http://anjimarth.com and my blog can be found at http://resonanteye.net 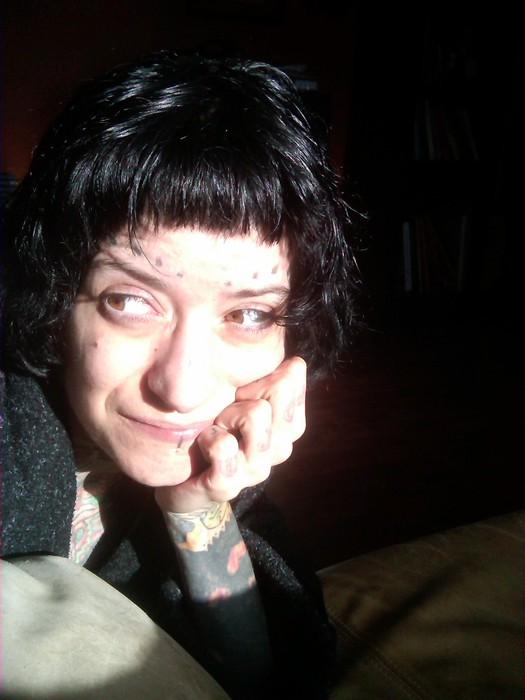