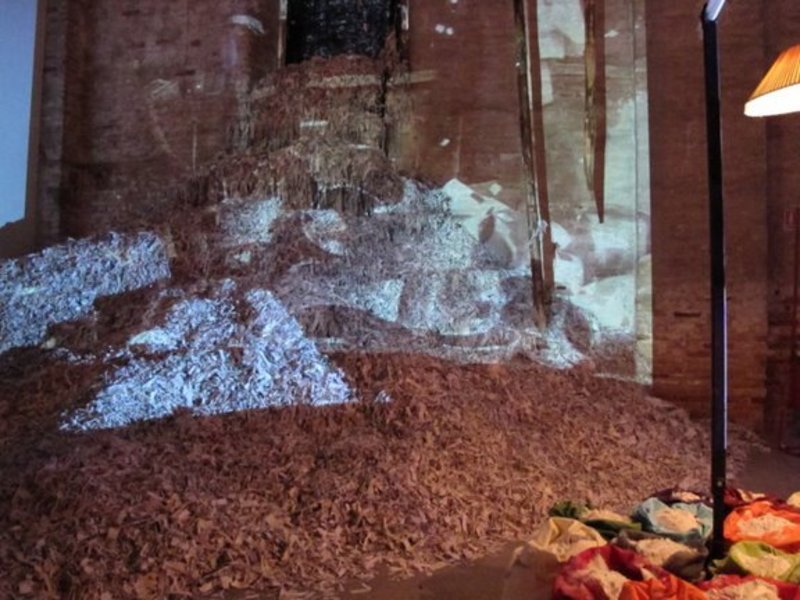 World on a String

Curator Daniel Birnbaum chose a clever theme in this year’s curated biennale exhibition. It has almost endless scope and he did a fairly good job of making sure that the artists fit the topic – even if that did sometimes mean equating “making installations” with “making worlds”. The art was generally of high quality, interactive, thought provoking and yes, even fun.

The first and most entrancing work was Lydia Pape’s “Ttéia I, C. 2002” – a black void shot through with glinting golden columns of thread that left us feeling a bit breathless (in the same way one feels in beholding a monumental piece of architecture).  There is something divine about it. Here light is a main actor. As one moves around the space the light catches different columns at different heights and while some columns glint in the light, others fade into the dark. It’s a bit like looking at rays of sun bursting through the clouds after a rainstorm. As to making worlds, its hints of the divine could be seen as an allusion to god and the act of divine creation.

Also exploring the cosmos with string is Tomás Saraceno, with his installation project “Galaxies Forming along Filaments, Like Droplets along the Strands of a Spider's Web” 2009. This piece works on many levels. What strikes one first is the pure physicality of it. This engulfing web of black elastic string managed to trap even the most cynical art-goer in a state of sheer delight. The strings form a dense black visual matrix – a galaxy of planets joined together by the pull of gravity. At the same time it looks like some bizarre molecule – a nucleus surrounded by knotted cones which form the outer shell of the atom. The atoms are then joined (albeit in a rather haphazard way) by an array of interconnected strings that affix them to the floor and to the ceiling. Here the artist is looking at the building blocks of our world and magnifying their forms – allowing us to crawl through the microscope into another dimension.

Spanish artists David Bestué and Marc Vives also took a very micro approach with their whimsical video “Actions at Home” 2005. In it the two artists turn their home in to a kind of situationist circus, performing a variety of actions which throw a wrench in the spokes of our cognitive wheels – things like camouflaging food in the kitchen. How does one do this? By taking ham and fashioning it into an oven mitt, molding butter into the shape of an electrical outlet or disguising spaghetti as a kind of mesh potholder. The artist then retrieves his camouflaged food (scraping the butter/electrical outlet off the wall, cutting up the oven mitt and throwing the pot holder into a pot of boiling water) and turns it into dinner. Another action involves making a fountain in the sink which means totem pole composed of pots pans, bowls and plates with cutlery acting as spouts to channel the water into various places. Other actions include “Dress up like a wall”, “Use the microwave as if it were a lamp,” “Ikea furniture talking dispassionately,” (shots of Ikea furniture and man talking in deadpan Swedish), “Family photo with removable people” (a photo with figures cut out with tabs so they can be removed from the frame depending upon the current state of family politics) and “Lost generation party” – a shot of sullen youths dressed in black staring and smoking while a man dressed in a suit of tube-shaped twisty balloons speaks random syllables through a megaphone. The youths don’t bat an eyelash. These artists are ones to watch. In fact there were many already watching – a perpetual crowd hovered throughout the length of the their 33-minute video letting out a chorus of laughter, which echoed through the pavilion. While many people reference the situationists these two have truly picked up the torch.

Hans-Peter Feldmann also explores the absurd through everyday objects but with a quieter almost mystical approach. His work “Schattenspiel (Shadow Play)” 2002-2009, features a row of spinning disks which hold a variety of household objects, everything from figurines to whisks. It's a domestic Merry Go Round with carrousels lit from the front and as they turn their shadows moving back and forth across a screen on the adjacent wall waxing and waning as their proximity to the light varies. What occurs is a complex choreography of shadows which mingle like guests at a party and finally blend together like memories until they are sometimes indistinguishable. This work is not so much making worlds but reflecting upon worlds past, upon memory about the people and things that come into our lives then mysteriously fade away into the ether.

The world of Nathalie Djurberg, winner of the Silver Lion for best young artist, is also one dominated by shadows, albeit metaphorical ones. Her installation “Experiment” 2009 presents a kind of garden of evil filled with glistening shiny plants, ochre-colored buds filled with blood red seeds or shiny blue blossoms, a dripping mess of varnish as if they’ve been slimed by some intergalactic slug. Amongst the flowers we find three fairly grotesque videos. In the first three pompous claymation religious figures (most likely Catholic) are standing together discussing something. While one swings a censer another licks a cross as if it were a lollypop. Such are their facial expressions and body language that one can almost smell the hypocrisy emanating from them like smoke from the incense. Then suddenly, out of one of the voluminous vestments of one of the priests crawls a scared and frightened naked woman. The priest tries repeatedly to push her back under his robes but soon the other priests find out and they all scramble for possession of her. This bizarre narrative soon switches focus to the naked woman who finds a companion and she and a third woman perform a kind of circus act with the three of their legs wrapped around each other – a dance that looks to be but is not overtly erotic. Then one woman gets down from the group and contorts herself into a crude position grabbing her own buttocks. Scenes of this are intercut with a new story of two friars digging a pile of dirt to uncover a massive sumo-sized woman. They proceed to drink her breast milk and end up drenched by the torrents she emits. The film continues with other sacrilegious acts and the grotesque aura is amplified by two other films, one about a naked woman who is slowly tortured by her own limbs (which have detached themselves from her body), and another about a lecherous old man chasing a woman through an evil grasping forest, filled with red spotted mushrooms. The overall effect is one of darkness and corruption – a world where morality and religion fight tooth and nail. Not a world we’d like to inhabit.

Pascale Marthine Tayou also captured a feeling of the bizarre and otherworldness with his installation “Human Being” 2007. It was one of the most enveloping pieces (in the sense of creating an actual world the viewer can physically enter) and conveys a sense of the primitive through natural materials and the industrial with themes of construction and production. His “African Village” landscape is dotted with wooden huts on stilts with roofs made of shredded paper. The windows of the huts are often covered with screens and inside we hear clanging as if these tinderboxes were capable of housing a foundry. Surrounding the huts are bags of plaster (labeled cocaine), metal beams and all other sorts of miscellany. The only inhabitants of this world are strange squat creatures, round oval bodies made out of thin strips of cloth and heads covered in masses of matted braids or wearing head dresses. This primitive aura is highlighted by a number of pointed spear-like pieces of wood hanging from the ceiling which contrast with the more genteel and colonial Belgian lace and exquisitely designed modern lamps which create a strong disjunction. What to pull out of it? I’m not quite sure. It’s a bit Fraggle Rock (the figures have a Muppet like quality), meets pre-colonialism, meets industrial revolution. It’s an interesting piece but its message could perhaps have been whittled into something more focused.

Elena Elagina and Igor Makarevich present a perhaps more direct statement with their work “Life in Snow/Common Cause” 2003. Though their etchings were not terribly captivating the two presented a fantastic metal sculpture of an eagle its head and shoulders covered in a layer of ice. A close look reveals the delicate ice crystals giving subtle refractions of light as the ice transpires, giving off a cool vapor as it vanishes. Where it has dripped down the sculpture we can see faint trails of rust.  It's a symbolic piece, which has broad implications, as eagles are an almost universally popular national symbol from the US to Syria. The single-headed eagle, an icon adopted by the Holy Roman Empire, morphed into a double-headed eagle in the hands of Byzantine Empire, with two heads to preside over Asia and Europe. Both eagles appear on flags from Russia down, through the Balkans and into Arabia. In this context its possible to see the bird as a stand-in for the nation – a nation which is cold and calculating, which makes decisions based on gaining territory or influence and does not necessarily espouse the warm humanistic ideals of its citizens. Here the concept of making worlds comes into the realm of the political – where one person can have the power to shape the worlds of millions.