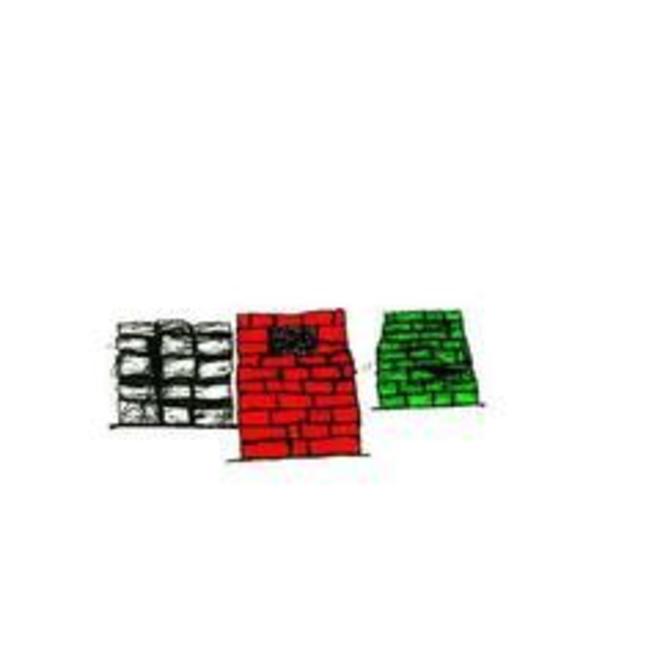 Located in a lane clogged with parked cars in Cairo's auto-repair district, Townhouse is one of the main engines of the Cairo art scene - powering a number of workshops, residencies and community outreach programs.

Nermine El-Ansari's exhibition picked up on the gritty urban atmosphere - a series of almost naïve drawings, inky agglomerations of apartment buildings drawn haphazardly on various kinds of graph paper often sinking into hi-lighter blue pools of water. They posses a charming naïve quality, like the doodlings of a bored trigonometry student scribing out a narrative of urban angst.

The show also includes a series of photographs depicting the higgledy-piggledy geometry of the Cairo skyline in large robust grains. The top row of photographs is juxtaposed with the same urban skylines only placed upside down.

While none of this work is really revolutionary, it's got a lot of heart and we can see the artist's concept beginning to assume a more mature form in the sound installation "Constructions II". A dark black room is hung with drawings on two walls which meet in the corner. On the right side we see an army of angry red buildings - each brick drawn one by one in a deliberately shaky hand. Windows are drawn in as lopsided squares and often all we see is a small slit at the top in an edifice that's designed for maximum protection and surveillance.

Crouching menacingly between the buildings is a giant helicopter and as we move through the installation the room is filled with sound of the chopper approaching, going from a faint drone and crescendoing into a blustery "chuckuh-chuckuh-chuckuh".

On the adjacent wall we see similar urban landscapes rendered in soft and blurry pastels. Buildings are picked out in fine black pen filled in with various pastels then smudged out to look like a vague recollection.

At the corner where the two series meet - there is a head-on collision of aesthetics and snatches of pastel are thrown into the red, while chunks of red brick wall invade the genteel realm of pastel.

We see the artist playing with positives and negatives in the brickwork; sometimes the black mortar dominates while other times the bricks run rampant over the mortar. And it's here where the building motif moves from doodling into something ultimately more interesting; the variations in the urban fabric of Cairo - from the sedate and leafy lanes of Gezira, to the riotous urban slums.

Under the Radar: Beatriz Guzman | Graham Skeate | Robin Wen
9/27/18
COMMENTS (2)
the way of expressin
excellent. a.v prasanth
Comment by: prakritiartgroups@gmail.com on Thursday 03/12/09 at 3:12 PM
Excellent
I love the Work. Great Title too. Wish I could be there in person to Gallery Hop
Comment by: Edward Torres on Tuesday 03/10/09 at 5:23 AM
ArtSlant has shutdown. The website is currently running in a view-only mode to allow archiving of the content.