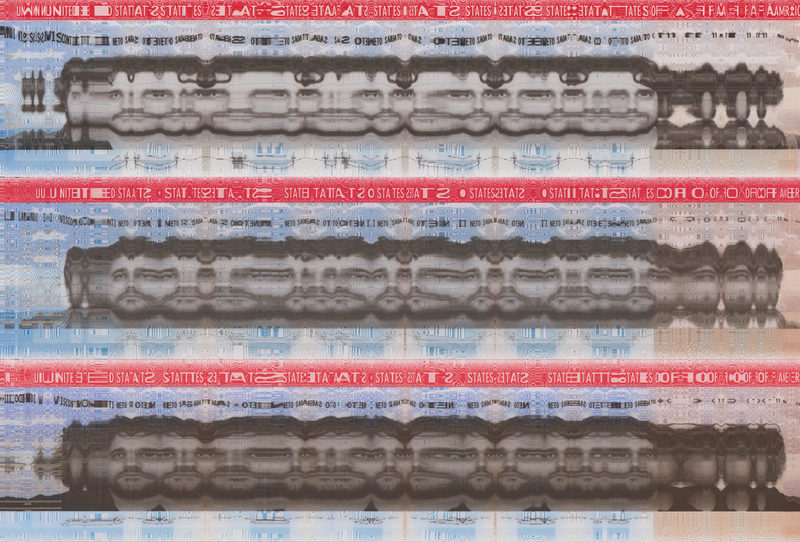 Although the law is perhaps the discourse that most literally governs citizenship, U.S. national culture—the collectively forged images, histories, and narratives that place, displace, and replace individuals in relation to the national polity—powerfully shapes who the citizenry is, where they dwell, what they remember, and what they forget.

In 1986, Sabato Visconti was a one-year-old baby when his parents brought him to Miami from São Paulo, Brazil, on a business visa. Baby Sabato was issued a social security card, “DO NOT EMPLOY” emblazoned on it in big red letters. His dad was a semi-precious gems dealer and came to run a booth in Sears, selling Brazilian tchotchkes, polished stones, and crystals with healing powers to the diverse people of Miami. Sabato and his parents would go back to São Paulo to visit family occasionally, renewing their visa along the way. They would import goods, sell them, and go back for more. In many ways, they were a mom and pop import operation for the newly globalized world, living the dream of owning a small business, working across national territories, facilitating trades of goods and culture, making enough money to raise their child. 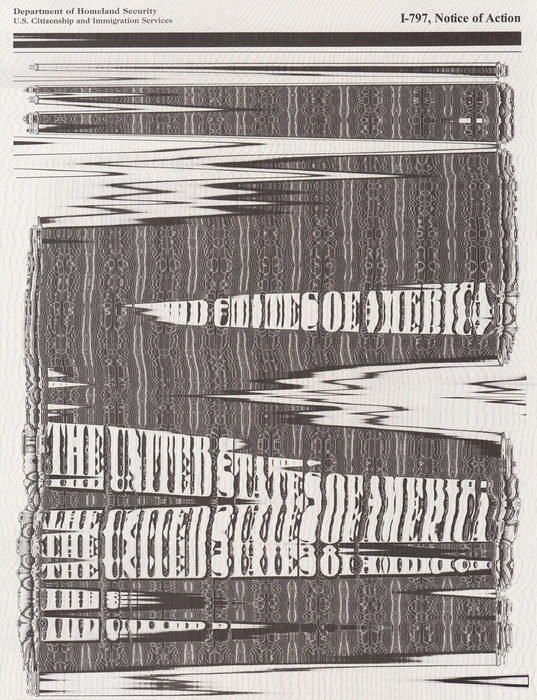 Sabato’s mom and dad separated when he was in first grade and his mother returned to Brazil. After that, his father began to re-enter the States on a visitor visa when he would go back and forth from Brazil. A bill signed by Bill Clinton in 1998 instituted three- to ten-year bars on anyone who overstayed a visa. Sabato, facing a ten-year ban from his home—America—if he left, stayed. The last time Sabato returned from Brazil was August, 2001, just before beginning his junior year in high school.

After 9/11, calls for tightening immigration reached a fever pitch as conservative U.S. politicians became more brazen in resurrecting nativist fears in order to pass racist and classist immigration policy. One of the most consequential ways of cracking down on immigration was by requiring businesses to show their employees had work authorization. To resolve this newly created group of ineligible workers, the bipartisan DREAM Act was introduced in Congress where it would languish for a decade. The DREAM Act was designed to not only create a path to legal work but to provide a path to citizenship for individuals who identified as American but were legally shut out. Sabato graduated high school as the nation he grew up in, the nation that was as much his own as anyone else’s, closed itself. 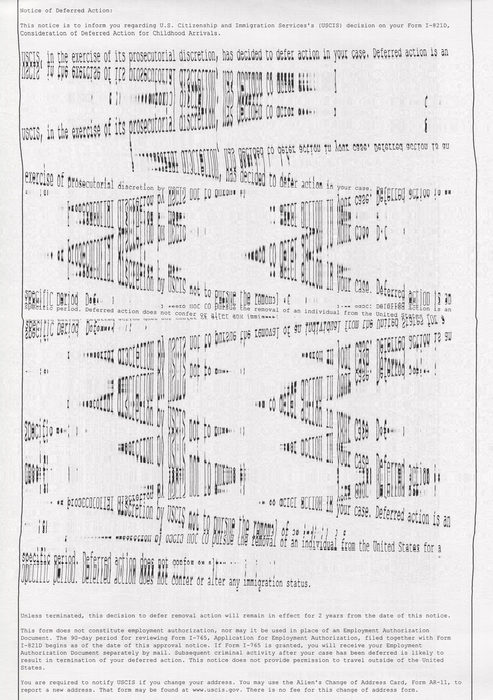 Despite political uncertainty, it was time to go to college. His father thought Sabato might be able to get a student visa but their immigration lawyer said it was impossible. They’d have to apply from abroad and if he left the country he would be unable to return. Sabato wanted to study biology and was accepted to Amherst College. However, since he didn’t have a work permit or citizenship, he couldn’t get financial aid and had to pay tuition himself: $40,000. He survived by flipping merchandise from eBay auctions. He and his father started buying Yamaha keyboards, digital pianos, and musical instruments and selling them in the nascent online auction market. They were able to pay his way through Amherst until the recession kicked in.

Running the eBay site while attending school, however, proved to be too much; he flunked out in his sophomore year due to the stress of his coursework and business. According to the nonpartisan Migration Policy Institute, only 4 percent of DACA recipients finish college compared to 18 percent of citizens.

Around the same time, Sabato began experimenting with photography, making films, and developing his style of illustration. He took classes at the University of Massachusetts and reapplied to Amherst. Sabato luckily found a supportive environment in the Liberal Arts college, which allowed him to get a scholarship to finish his schooling. In 2009, he graduated with a degree in Political Science and got an internship doing graphic design for a financial accreditation company. However, once they wanted to bring him on full time, he ran into a wall.

“DO NOT EMPLOY” was still emblazoned across his Social Security card. 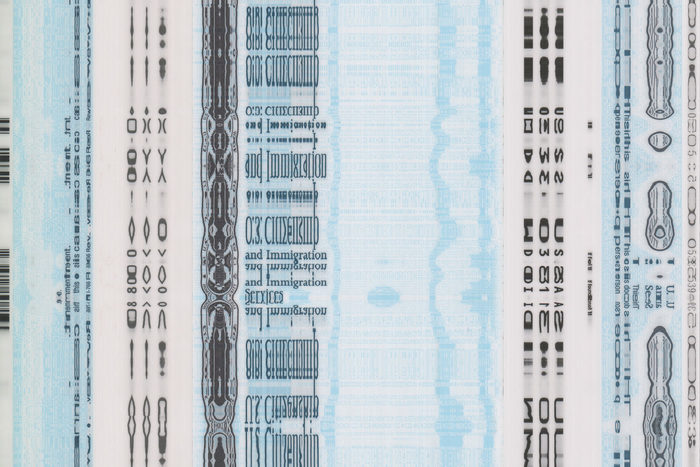 The firm hired a lawyer and tried to find a way to offer him a position but ultimately, there was no way for him to attain a work permit without first leaving the country and sitting out the ten-year ban. The only work available to him was gigging on commercial shoots, wedding photography, and video production, while piecing together enough income to survive.

Gigging didn’t set him apart from his peers too much. The recession hit everyone equally. In 2009–2010, the largest employer for Amherst graduates became Teach for America instead of Merrill Lynch.

In 2012, President Obama stood in the Rose Garden and announced the establishment of the DACA (Deferred Action for Childhood Arrivals) program. The main purpose of DACA was to provide a way for children and young adults without citizenship to receive a work permit, to become part of a regulated citizenry. The following year, Sabato began the application process. “We’re trained to quantify the self. Anything you apply for as an immigrant requires an intense amount of documentation,” says Sabato. His biggest challenge was to prove he was in the U.S. for a given period. He had to get phone records, bank statements, an affidavit from Amherst. He had to document his presence despite the unofficial avenues he was forced to traverse as an undocumented person, living in a country that didn’t officially recognize him.

Phone records are expensive. The DACA application fee is $380, required biometrics are $85. If you have an immigration attorney—it’s advised—tack on a couple thousand. The process is prohibitively expensive for people living along the margins. 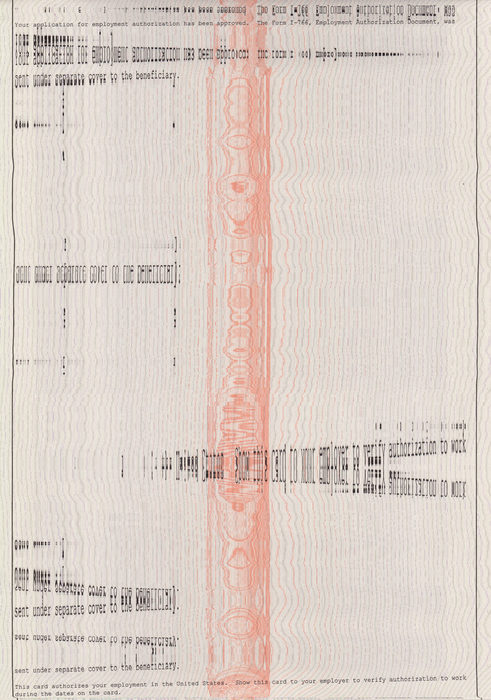 Sabato received his DACA certificate in 2014, a year after submitting his materials. “On one side of it, it made me happy to be able to provide the correct documentation, but not everyone can do that. That aspect of the process is what this work questions: these are sites of power imbalances that most people take for granted.” DACALOGUE, a series of prints that use Sabato’s own DACA application as their source material, gets at the distortion of identity an individual undergoes, a privilege in itself: “They ask for proof of identity because they know not everyone can provide it.” In 2017, it was surmised that only half of eligible undocumented immigrants had applied for DACA protection.

Sabato’s aesthetic is founded in glitch art. Glitch has long appropriated the mistake as an aesthetic gesture. For DACALOGUE, Sabato physically manipulated his application materials as he scanned them in a flatbed scanner, pushing and pulling the documents as they were recorded. The resulting distortion opens up questions surrounding the documents’ essential meaning. Where does identity, and ultimately personhood, reside in the bureaucratic state? 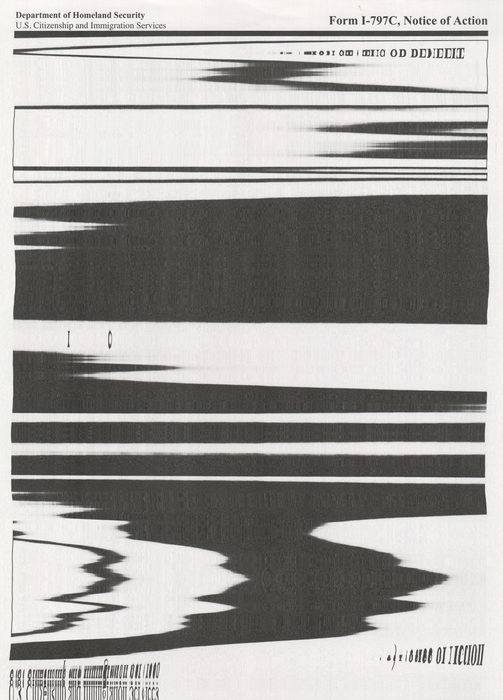 Past and current political discourses surrounding immigration have a distinct cultural dimension and, as the opening quote suggests, amount to the policing of an imagined identity. Just last month, the U.S. Citizenship and Immigration Services changed its mission statement to omit the phrase “America’s promise as a nation of immigrants,” replacing it with the decidedly more xenophobic [emphasis mine]:

U.S. Citizenship and Immigration Services administers the nation’s lawful immigration system, safeguarding its integrity and promise by efficiently and fairly adjudicating requests for immigration benefits while protecting Americans, securing the homeland, and honoring our values.

In the above, Americans are set apart from immigrants, as if those who have citizenship now were never immigrants to begin with. The bending of Sabato’s DACA application mirrors the distortion of identity as it enters into the national bureaucracy. The nature of undocumentation as a means to create a nonperson is a fiction: the bureaucratic fixity becomes an attempt to smooth the glitch inherent in the concept of the legal person which holds as fact that a person is not a person without the proper documents to prove it. In reality, undocumentation doesn’t create the nonperson; oddly, it is the act of documentation that does.

Glitch, errors, and purposeful interruptions of systems of control are a site of possibility now more than ever. As systems become increasingly obscured by specialized knowledge, we must practice breaking them to expand our own territories.