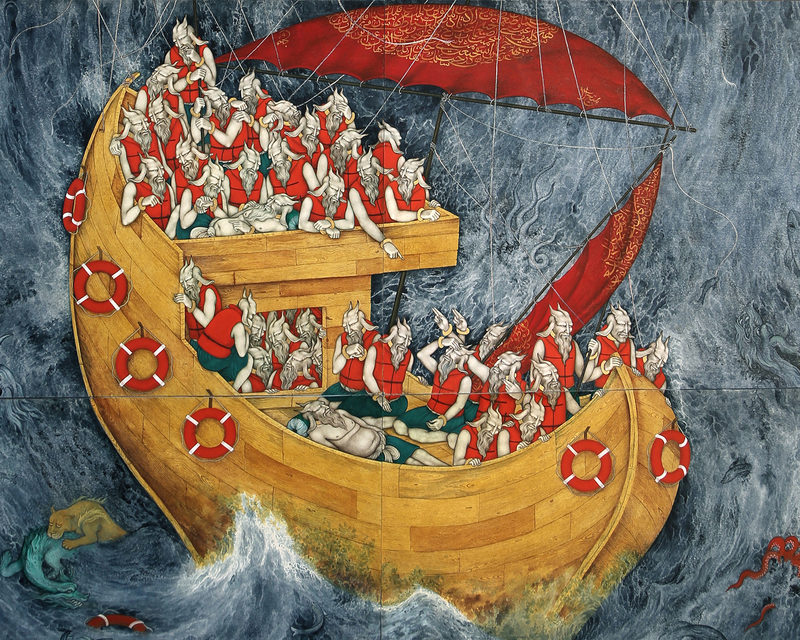 Refugee Artists Take Control of Their Representation in a New Exhibition

“A piece of hell,” is how one refugee, stranded in legal limbo on the isolated Pacific island of Nauru, describes the situation. It’s a mild epithet for the ordeal that asylum seekers endure to achieve their right to not be persecuted or annihilated. Not since the Second World War has there been such a massive number of displaced people—the number is currently larger than the entire population of the United Kingdom. But we seldom hear or see these people individually, and even less often without mediation or intervention from a third party.

The Invisible, currently at UTS Art Gallery in Sydney, uniquely features the work of five artists who are themselves refugees: Khadim Ali, Elyas Alavi, Avan Anwar, Rushdi Anwar, and Abdul Karim Hekmat. Together their work offers a direct, multidimensional narrative of the dire circumstances pushing people to leave everything behind and migrate to another country. 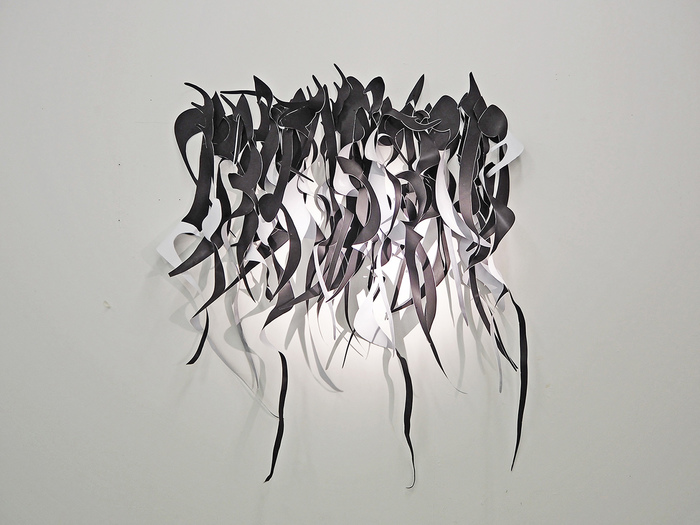 The title of the show makes reference to an 18th-century Persian poem by Hatef Esfehani, who wrote “Whatever your ear has not heard, hear that / What your eyes have not seen, see that.” Indeed, the work of the five artists, including the curator, comes unfiltered, and their scars and hopes are made to be seen and heard. They are survivors of ongoing hatred and intolerance.

Their plight also gives light to an inexcusable injustice, specific to Australia. Outsourcing its international obligations, Australia currently imprisons thousands of asylum seekers in camps on Pacific islands. Life in these camps is appalling beyond belief, pushing some asylum seekers to suicide. But even worst is the exploitation of legal loopholes by which the Australian government to justify the detention camps: it sets a dangerous precedent that undermines the tenets of international law concerning refugees and asylum seekers, to say nothing of common decency and benevolence. 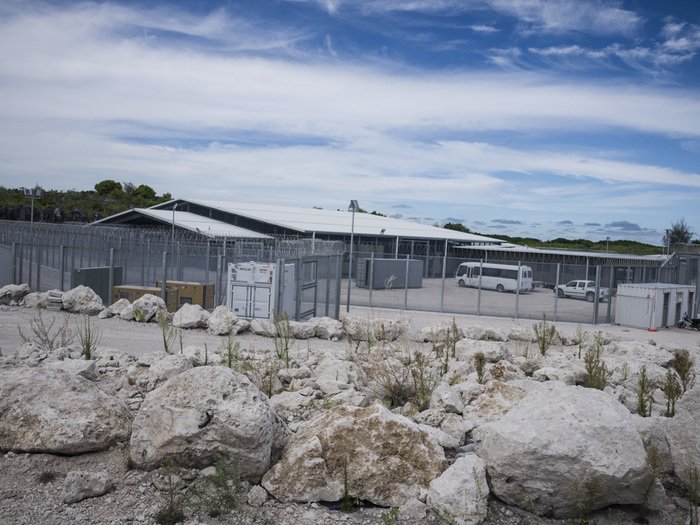 This is evident in Nauru Refugee Voices (2017), by Abdul Karim Hekmat, an artist who first came to Australia by boat from Afghanistan in 2001 and lived in an immigration detention facility for five months. The work comprises three documentary videos, based on the first-hand testimonies of refugees fleeing from human rights abuses in Bangladesh and Pakistan. Refugee Voices is a testimony of their deep despair, and how, through poetry and hope, refugees can withstand the callous violence and ostracism they face in the Nauru Processing Centre.

The sufferings of “boat people”—those who attempt to arrive to Australia by sea—is represented in the outstanding work of miniaturist and painter, Khadim Ali, who trained in Lahore and Tehran. In Untitled, from The Arrival series (2016), executed with classical miniature painting techniques and materials, Ali represents several demons cramped on the deck of a ship, all wearing life vests.  Some appear seasick, others talk and are friendly with each other, a few stare inquisitively towards the horizon, some are inward looking; all seem to be in a state of risk. 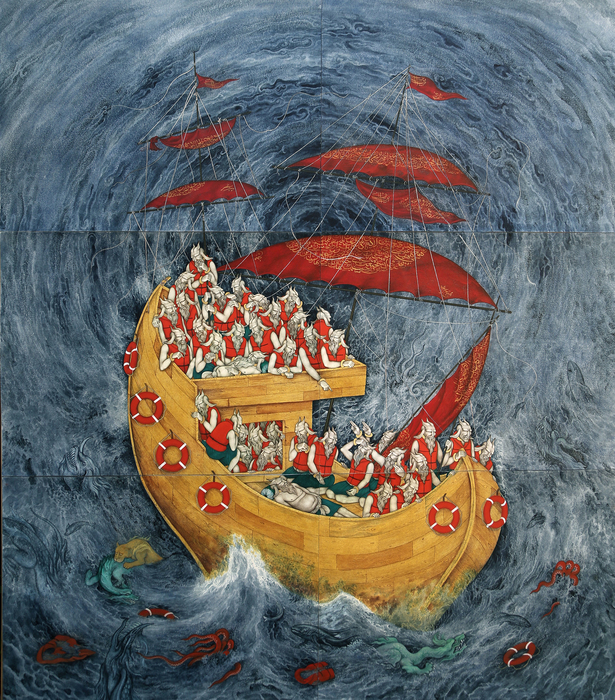 In traditional Persian literature, a dev, or in Arabic, a djinn, from which the English word genie is derived, is not necessarily an evil being. Although they are often represented as malignant forces, djinns are also portrayed as playful magical creatures, wise and beautiful, with powers that summon more surprise than mischief. In any case, these supernatural creatures serve specific allegories, and as such, see their meanings change throughout time. In Iran, for example, in the years leading to the demise of the Qajar period in the early twentieth century, demons represented the oppression of ruling classes in the revolutionary press. It is ironic that in all their powerlessness, asylum seekers are portrayed as dreadful demons, a regrettably and common perception to be found not only in the media but also in the halls of parliament.

Like Khadim Ali, fellow artist Elyas Alavi is also a member of the Australian Hazara diaspora. A Shiite Muslim religious minority, Hazara people live mainly in Afghanistan and Pakistan, where they are constantly targeted, expelled, and killed. In Fading Faces (2017), Alavi uses acrylic paint on glass to portray the faces of those affected by a bomb attack that he witnessed during a visit to Kabul in 2016, in which 90 Hazara protestors were killed. The paintings are rough, like a brutal memory; the contrast between a sudden burst of ruthless violence and the fragility of glass serve as reminder of the weakness and vulnerability that certain groups face day to day. 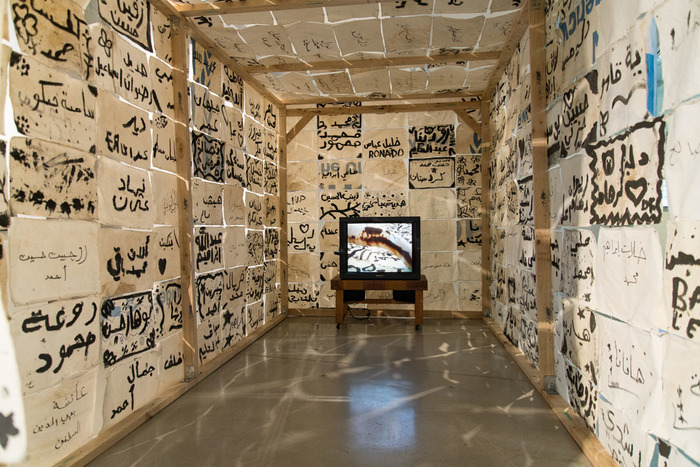 The same fragility is found in Rushdi Anwar’s installation The Notion of Place and Displacement (2017), which consists of a UNHCR tent made of fabric patches, in which Iraqi children inscribed their names, an activity the artist undertook while visiting Kurdistan refugee camps in Iraq. In this area, torn by the menace of the Islamic State, up to a million and a half people have been internally displaced. Their daily life, although mitigated by external aid and the eventual containment of ISIS forces, mirrors the tent itself: harrowed rags, unevenly stitched together, poorly attempt to mimic a lasting haven. 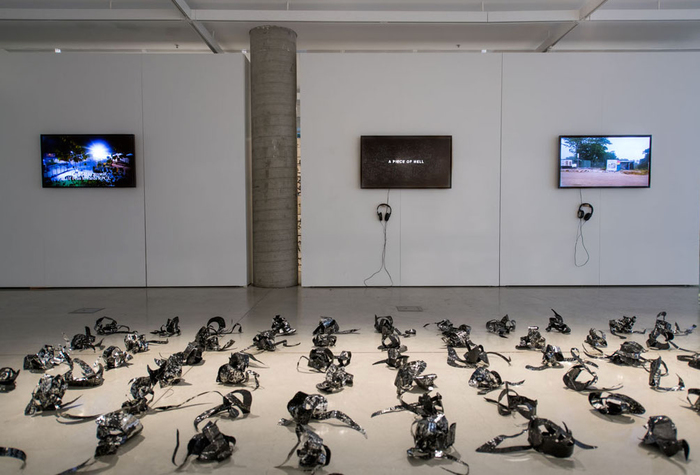 The work of the last, and only female artist, Avan Anwar, also addresses the fate of Iraqi Kurds. In Displacement (2017), Anwar dismantles Kurdish poetry to its minimum unit: letters in Arabic script, made of aluminum foil, which she wrinkles and scatters on the gallery floor. Only those who have been coerced by circumstances to adopt a new language—more as a survival strategy than a choice—can attest to the pain of displacing one’s original tongue and, with it, gaining a different way of not only understanding others but also of being understood.

In a time characterized by forceful migrations, racist misconceptions, and low tolerance towards refugees and foreigners from societies and governments across the world, The Invisible certainly brings to the table poignant questions. Wherever people feel safe they will be indifferent, Susan Sontag wrote. And these artworks work to haunt those who consider themselves out of harm’s way, pushing them to question why needless suffering is enforced by governments and tolerated by societies. Despite challenging subject matter, it is refreshing and crucial that the audience of The Invisible can attempt to detangle such contradictions with the assistance and firsthand experience of those who most deserve to be heard.

The Invisible at UTS Gallery, Sydney, continues through November 24, 2017.

Claudia Arozqueta is a writer and curator currently based in Sydney. Her writing has been published in various international magazines, books, and journals.

Rodrigo Azaola is an artist and writer specializing Middle Eastern studies and languages. He served as Head of the Political Section of the Mexican Embassy in Tehran.