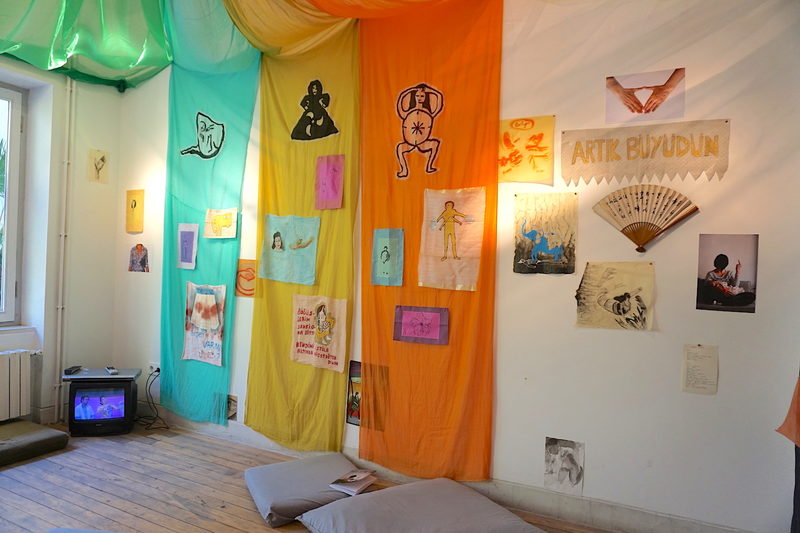 In “A Room of Our Own,” Istanbul Artists Talk Motherhood, Careers, and Periods

Two years after giving birth to a human being, I realized that my body and mind had become entities, two different systems: one, a figure of unity and strength, the other caught in an interminable state of disfigurement. No matter how hard I tried to ignore my body “becoming animal,” as Deleuze and Guattari would say, no matter how much I laughed in the face of post-partum depression tales, I could not have my life back as it was before. I was stuck in this simultaneous nightmare and heaven called motherhood, unwittingly thinking about my own femininity at all times.

In that light, when I received a questionnaire a few months ago about topics like menstruation, childbirth, abortion, miscarriage, biological clocks, and menopause, I felt relief to learn that I wasn’t the only one contemplating issues like the hierarchies of motherhood and childcare, feminine biological cycles, and their physical and emotional outcomes. This intimate survey, sent to me by an artist and fellow curator, was the starting point for the current Ark Kültür exhibition A Room of Our Own, which is an extension of workshops on motherhood and fertility run by Arzu Yayıntaş and Güneş Terkol since 2015. Initiated in response to escalating patriarchal political inclinations in Turkey and state control and social pressures on women’s bodies—in 2008, for example, the then prime minister of Turkey advised all women to have at least three children—the workshops aimed to reconsider often overlooked or under-discussed issues like birth, childcare, and the power dynamics of motherhood. 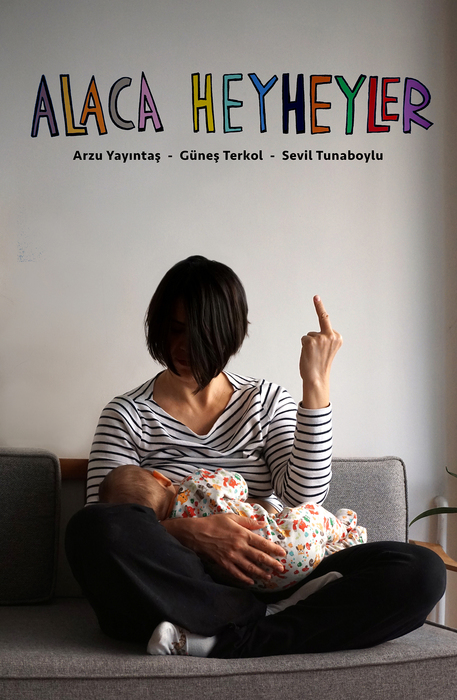 Curator Arzu Yayıntaş echoed my own recent sentiments as she elaborated on the personal impetus behind the workshops and subsequent exhibition: “I entered the world of motherhood after I gave birth, and since then my life has transformed painstakingly. As an activist feminist, I have been an advocate for abortion, yet the scarcity of discussions about motherhood made me think about the division of labor in childcare, isolation in motherhood, and the dilemma between the career and motherhood.” The workshops, she said, made her realize just how much people had been suppressing these issues and needed to talk about them.

Like the workshops and questionnaire, the exhibition, which included an open call for artwork, was a collaborative, exploratory venture. Yayıntaş and her co-curators, Terkol and artist Sevil Tunaboylu, conceptualized the exhibition as “a common space with a more equalitarian and embracing attitude.” Some artists produced new works, while others dug into their own archives for previously unexhibited artworks. The resulting show brings together 22 artists who handle the topics of motherhood, fertility, and labor using nearly every imaginable medium.

Ark Kültür is a three-story building in Istanbul, with a garden in the entrance. Before entering the building, one hears Sena Başöz’s Sweetheart (2017), which is installed at the bottom of a cheesewood shrub. Emanating from a secluded corner of the garden, we hear terms of endearment like “my love,” “sugar-darling,” “honey babe.” Başöz’s work recalls the the tale of King Midas, whose barber whispered into a hole in the ground, “King Midas has the ears of an ass!” Just as plants grew around this hole to speak the king’s secret, Başöz’s plant voices the hidden words of a silenced mother. 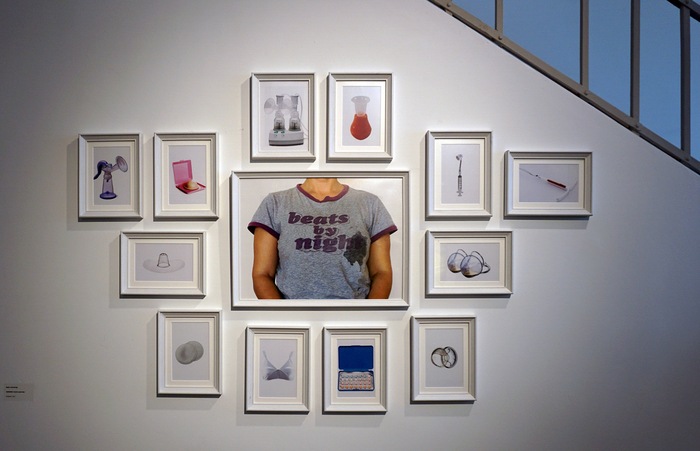 On the second floor entrance, we see Yayıntaş’s Mother’s Toolkit (2017). In the middle of this assembly of photos is an image of a woman with milk leaking from one breast, staining her t-shirt. For a woman who has experienced lactation, encountering this image is a visceral experience. For me, it brings back memories of pumping milk for my daughter in a filthy archive restroom while I worked on my dissertation, and still coming home to find my shirt stained. Around this photo are images of items about birth and its control, displayed like portraits of loved family members: a nursing bra, re-usable bra pads, a nipple shield, manual and electric breast pumps, contraceptives. Nearby, Özgül Arslan’s video Milk Me (2006) chronicles an electric pump milking a woman, filling only a third of a bottle. Arslan criticizes exclusion of women from the labor market, and the overemphasis on women’s reproductive capacities and value—as long as they are child-bearers. Her work speaks to capitalism’s exploitation of women, who not only have a huge pay-gap in the work force, but are also expected to maintain the domestic space. 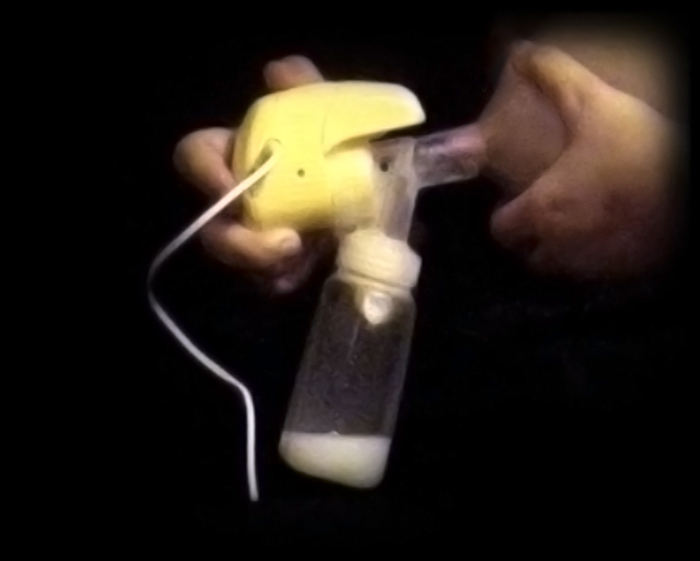 An embroidered tulle curtain marks the entryway to Moon Tent (2017), a work created by the exhibition organizers Yayıntaş, Terkol, and Tunaboylu. Moon Tent invites participants to think collaboratively about dreams, thoughts, and feminine cycles, directly responding to the questionnaire disseminated at the outset of the project. Have you ever thought about your own birth or have you talked to your own mother about it? What do you think about abortion? If we wanted you to choose one color for before and after birth, what would those be? Do you think menopause is liberating or restrictive? The results are published in a book and expressed in the form of embroidered images, illustrations, texts, and photographs on the tent’s walls. One embroidered image depicts a woman having a C-section—“I didn’t feel my belly” reads a nearby text; another shows a breastfeeding woman with the text “As if my breasts were his/hers, I felt under invasion.” There is humor too: in one photo, a breastfeeding woman holds up her middle finger; in a folding pop-up card a baby pops and an Oscars statue pop out of a uterus. 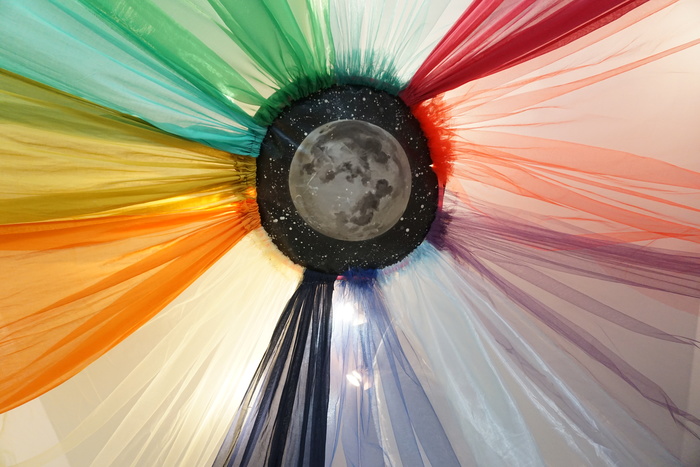 In the middle of the ceiling, which is covered by rainbow-colored tulle, there is a moon. As a symbol of feminine cycles, the moon unites a large cross-section of women under its tent (it’s worth noting that, though trans women are never explicitly excluded, the exhibition’s reproductive focus centers largely on cisgender women’s experiences): women who had an abortion, gave birth, or had a miscarriage; women who don’t want children; women who felt useless because of infertility or menopause; women who love or hate their menstruation; women whose bodies are controlled by the government or families; women who felt shame for breastfeeding in public…

Throughout the exhibition, the tent is used for performances and workshops in which women share and learn how to fight against social pressure and misogyny. It is the eponymous “room of our own,” reconceptualized from Virginia Woolf as a communal space necessary for women not only to create their artwork, but also to unpack baggage long hidden from public or pigeon-holed as “womanly” or “feminine” within the art world. 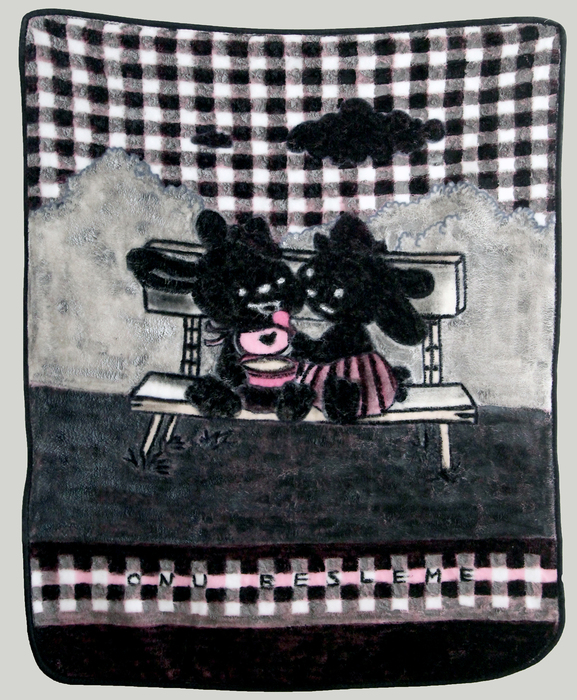 Climbing up to the third floor, we see the text work of Oda Projesi, an artist initiative founded in 2000 by Özge Açıkkol, Güneş Savaş, and Seçil Yersel. The roots of their ongoing project, ANA—“mama” in Turkish—were planted in 2013 in Astrid Noack’s Atelier residency, in Copenhagen. Inspired by identifying their own needs as artists and mothers, the artists collected audio recordings on the subjects of motherhood and being a woman artist, and shared their strategies concerning these issues. Across the stairwell is Neriman Polat’s Heartless Blankets series, in which she recomposes texts and images on children’s blankets. In Don’t Feed Him (2017), a female rabbit, whose gender we can identify through her clothing, feeds a male one. One of the thousands of representations in which a woman is happily feeding a man, the blanket speaks to the early socialization of gender roles. Polat questions the role of women as caretakers, reminding us that being an “evil” mother/sister/wife is a taboo.

Cut, by Nurcan Gündoğan, is an installation and video staged in a room with an old TV set, a chair, a hand-knit baby sweater, and an umbilical cord hung on the wall. It’s a ceremonial place where the artist has severed her relationship with her mother by taking her umbilical cord back at the age of forty. “Cut” also references to the cinematographic “Cut!” for this will be the last video that the artist will shoot with her mother. In the video, Gündoğan asks her mother questions about birth, abortion, and fertility. Considering abortion, Gündoğan’s mom responds, “You shouldn’t have done it in the first place! Abortion is unacceptable!” She tells her daughter that menopause devalues a woman because it ends her fertility, and thus womanhood. When asked if she needs her womanhood, however, she replies: “Why would I need my womanhood? I’ve given birth, I’m done!” These answers illustrate the toxic patriarchal mindset the artist and others like her have grown up with in Turkish society. 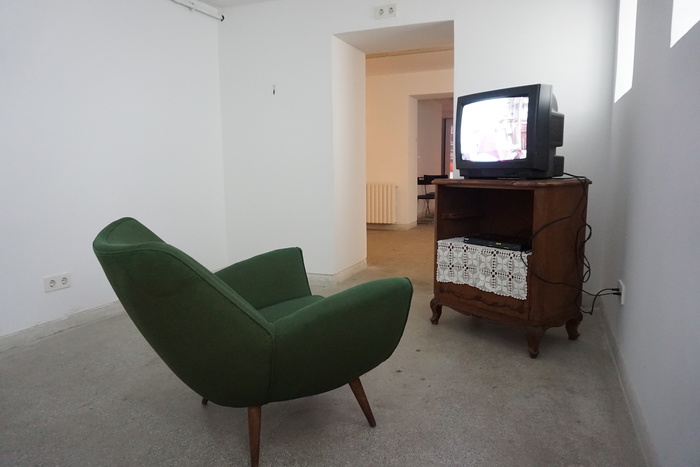 There’s an old custom in Turkey for a mother to slap her daughter in the face when she menstruates for the first time. It’s too easy for women to internalize and perpetuate shame and misconceptions about their bodies and roles in society. These kinds of unquestioned traditions are also the reason why a strong, feminist exhibition like A Room of Our Own is so crucial at a time like this, when the patriarchy is gaining social and political power in the country. As Yayıntaş told me:

This is an exhibition to share and get stronger. This is the reason to use the room metaphor. The room is to shatter the very clichés about women in the society and to heal at the same time. The room is to make more experiences visible and strengthen women’s solidarity. We aim to remember our first slap when we menstruate for the first time and heal it by embracing each other.

Posted by Pınar Üner Yılmaz on 5/24/17
Tags: motherhood Women Artists fertility istanbul
RELATED ARTICLES
COMMENTS (0)
ArtSlant has shutdown. The website is currently running in a view-only mode to allow archiving of the content.