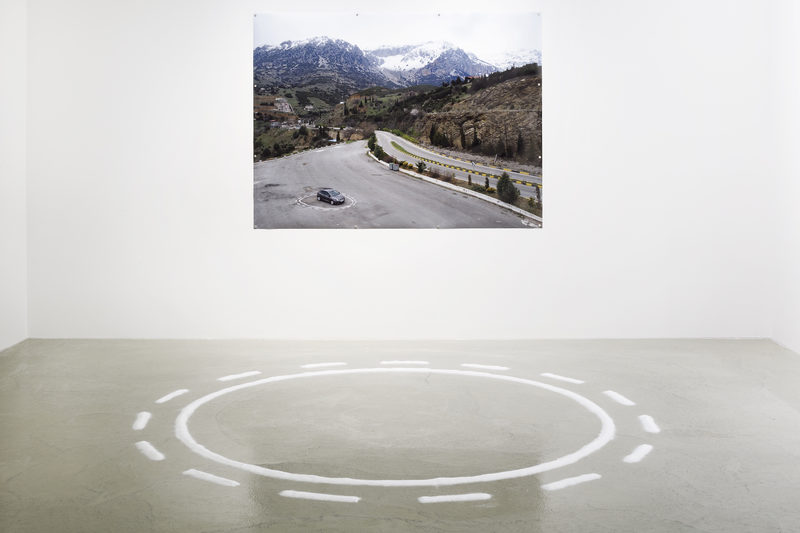 According to artist, writer, and theorist James Bridle, the autonomous car and the issues it raises stand in for many of the questions facing humanity today: what will ultimately result from our relationship with technology and artificial intelligence? How will we collectively adapt to world where jobs—like truck driving—have been automated out of existence? How will we deal with increasingly opaque, complex systems of governance and exchange?

Bridle, whose work spans a variety of topics tied to network infrastructure, government transparency, and technological surveillance, looks to the technology behind self-driving cars in his new exhibition, Failing to Distinguish Between a Tractor Trailer and the Bright White Sky. Its headliner photograph, UNTITLED (AUTONOMOUS TRAP 001), depicts a self-driving car that has been “trapped” in a ring of salt resembling road lines. A snow-topped, Mount Parnassus looms above the car’s Greek environs. We recently discussed some of the political ramifications of automation, the role of mythology and mysticism, and the artist’s strategy of learning-by-doing as a way to understand and deal with complex systems. 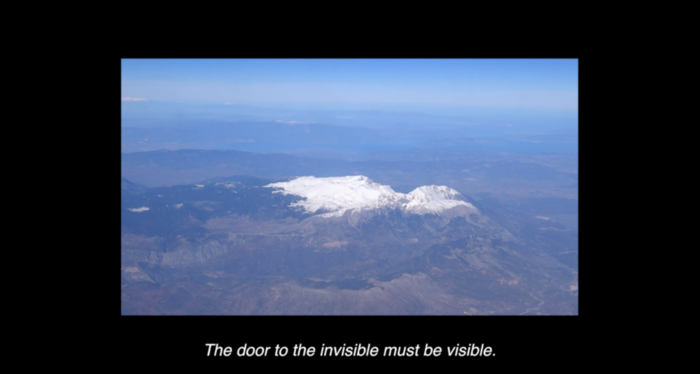 Benjamin Busch: Your work deals with increasing complexity brought on by planetary-scale computation. It makes typically unseen information visible. How do you choose what to make visible?

James Bridle: I think the key term there is “typically unseen,” because none of this stuff is really invisible. It’s essentially about a curiosity to go out and look for it. I sort of realized doing this project, well really when I started finally putting the works together for the show, that it was essentially a project about my own curiosity and my own interest and desire to unpick things, to be able to look at complex systems and think that, yeah, I could understand that, I could get into that. So it’s really a project of self-education.

The things that I pick are the things that I find to be fascinating at the time, and I often don’t realize why I’m fascinated by them until I’ve spent quite a lot of time looking at them. And in fact, it’s only just in the last week maybe, after working on this project for months and months, that I really see the connection to previous work. The autonomous vehicle, which is an intensely networked vehicle, being something actually incredibly closely related to all the drone work that I did before on unmanned military aircraft. And every time I try to get away from that subject, I find myself kind of looping back to it, because it seems to be so compelling—even if I don’t realize I’m doing it. 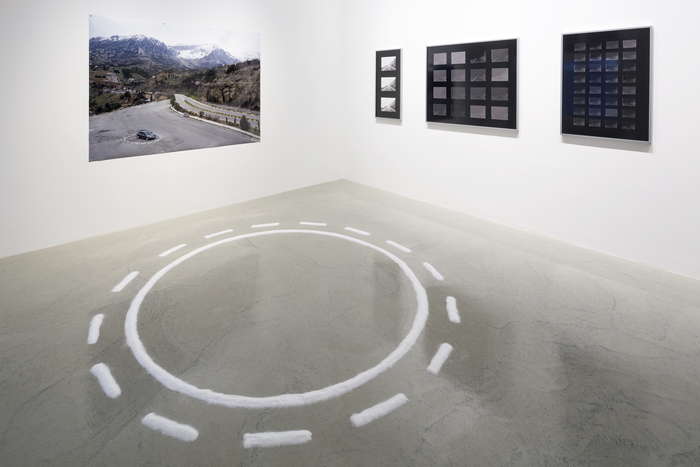 BB: So maybe in contrast to the drone material, what about autonomous vehicles makes them an especially good example of automation?

JB: The first thing that got me interested, I realized, exactly like the drones, is that I don’t see people really talking about them, or really thinking about their implications—except within maybe very specialized communities of people actually building them. But they’re also a thing that’s already here; there are autonomous vehicles driving on the highways in the U.S., on highways in Europe, at different levels of autonomy. Most of what’s required is already within vehicles that are on the road here. Some of that software hasn’t quite been enabled yet, but it’s sort of ready to go.

So it’s a technology that’s already here, and yet we’ve had no discussion of its consequences. Some of those consequences may be fantastic. In the case of self-driving cars, lower road death seems like a really good thing. We do appear to be essentially trying to rebuild public transport, when maybe we could just do that instead. But one of the biggest effects is how it’s going to change both people’s working practices and people’s social practices. So we’re about to lose all of the jobs in driving—whether that’s taxi cabs, whether that’s bus drivers, whether that’s truckers. That’s a huge sector of the workforce that is going to be incredibly deskilled, and has already been deskilled—through GPS technologies, through taxi apps, all of these things. They’re all a process of deskilling and alienating workers until they’re just slightly more expensive than the robots, and then they’ll get replaced by those as well.

And that is a really clear, obvious example of what’s happening across labor and working practices in general, so it’s a really interesting way to approach automation in labor. But it’s also for me a way of asking what it is that we want to automate. I’m not a fan of cars, I don’t have a car, I think they’ve been really bad for cities, for society, for the environment. But I do like driving, and driving is fun, and lots of people like driving. It seems to me that we’re rushing towards automating something that people enjoy a lot as well. No one is going to stop people driving, but it seems slightly unreflective, this kind of desire to do away, and to automate, and to replace human pleasures with machinery, essentially. 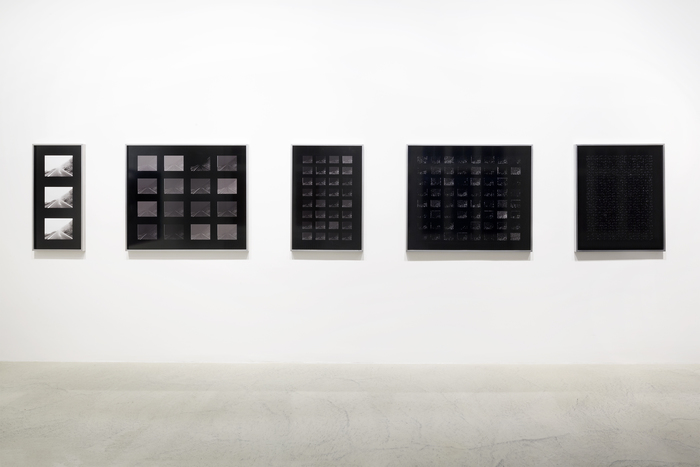 So I fully support that and, in part, my work is absolutely connected to that, in that within this exhibition there’s essentially two responses to this question of automation, using self-driving cars as a figure.

On the one hand, to do it myself, to learn how to do it, to make that technology accessible to everyone, which I think is a really essentially democratizing move. The only way we’ll get some of those social goals that are hoped for from an accelerationist view of technology is also to make these technologies accessible to everybody, so that they’re not just the preserve of various elites—whether that’s programming elites, or corporate or financial elites—everyone needs to be able to do this stuff. And everybody can! And so by doing this, I’m hoping to demonstrate that this is possible. You can read the stuff that’s on the internet, there’s open-source software. I make open-source software myself as part of the project.

And the other strand of it is also, actually, straight-up resistance. The traps for autonomous cars, which are somewhat playful, but nevertheless are actual ways of interacting with this technology directly from a non-specialized point of view.

Both of those approaches are present, I hope, within the work. Both trying to understand and master it oneself and therefore democratize it and also to resist it where necessary. 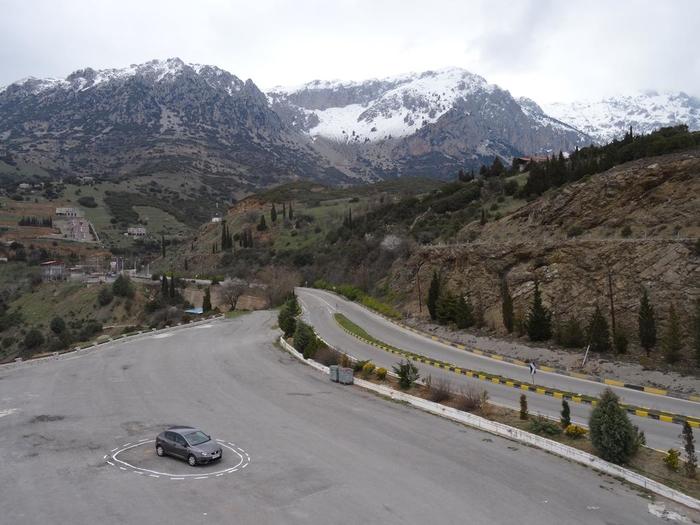 JB: The connection to the Greek landscape is simply because that’s where I’ve been living for the last couple years. I didn’t go there to seek that specific inspiration, but it’s quite hard not to—it’s a pretty great landscape. And as soon as you find yourself in that landscape, you immediately find yourself in the mythology of that landscape as well, because it’s radically present there, and you start to understand and see why. If you’re driving around these mountains, you can’t help but bump into temples and also ancient caves, and groves of mushrooms, and all these kind of things. So that was really not an intention to go out and seek that, but it felt kind of inevitable.

It’s a massive cliché for an English boy to go to Greece and get inspired by Greek mythology, but it’s always been present in my work in various forms, and it’s rarely been as explicit as it is now. Actually, the effect of doing this there has allowed me to make that more explicit in my work. I’ve made a lot of allusions to mythology in the past when I talk about the need for new metaphors for technology, and particularly complex technologies, or new metaphors for the cloud, on which I’ve previously drawn from plenty of mystical texts in talking about that.

And I’ve always had a connection to mythology as a form of storytelling that precedes technological storytelling. So I’m really interested in the fact that a de-humanized view of technology denies the power of different mythologies for enacting or talking about those technologies. There’s a long, long history of narratives that are capable of dealing with uncertainty, and doubt, and complexity. Humans have been making those narratives for a very, very long time. So for me it feels entirely natural to connect that back with the work that I’m doing now. 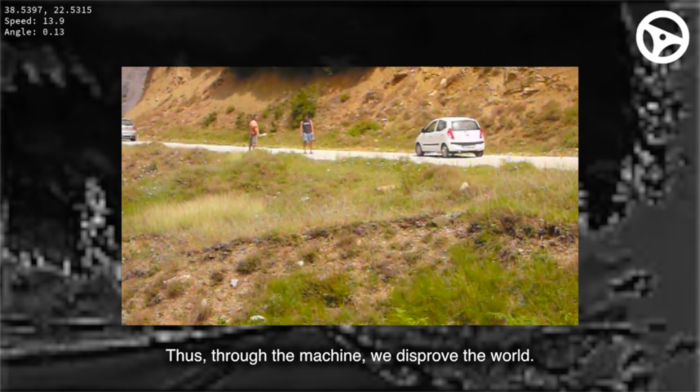 BB: When we think about technology and the people making technology that’s part of our everyday life, we also think about an implicit idea of the human that’s perhaps brought on by humanism. To what extent does the human as we know it play a role in your work, or are you trying to redefine what’s human, actually?

JB: The human plays an absolutely central role in my work, because it’s just me trying to figure this stuff out. I don’t see these technologies as anti-human, or de-humanizing, or any of those things. But I think they’re often used and deployed in that way—not always consciously by the people who make them, but that is often the effect—because people don’t think through the moral consequences of the work they make. The first people to make taxi apps weren’t planning on destroying labor unions and lowering wages and all these kind of things. But to think it through, those are some of the consequences it has. Like with self-driving cars—the people designing them aren’t trying to put people out of work, that’s not their intention, but unless you think of the social consequences surrounding the work, then those are often going to be the results.

The human impact of these things is important for me, but also on an individual human level. For me, the interest in doing this work is also, as I’ve said, what I learn from it. This is not really about building this technology; it’s about building an understanding of the world through learning about how these systems work. 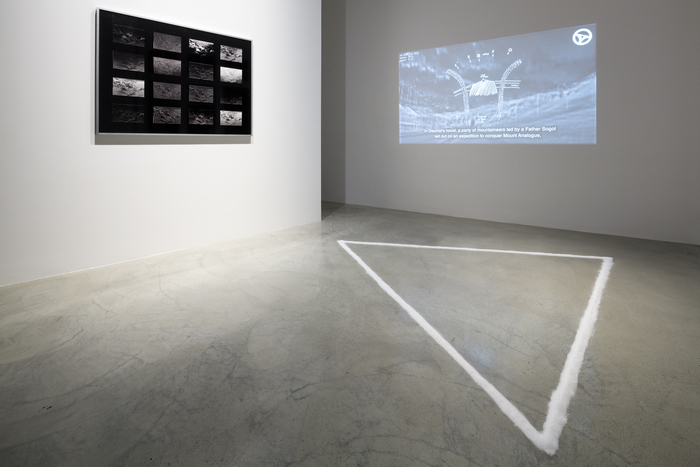 BB: Do you think that art, in your process, can be used as a device to overcome alienation, as you’ve described it?

JB: It certainly overcomes my alienation. I’m always loath to prescribe it as some kind of panacea for everything. But, it is the place in which you can do things with things other than what they were intended for. By which I mean the pressure of, for example, the only reason to go and investigate a self-driving car is so that you can go out and sell cars. Well, not if you choose to do it in other ways. If you choose to see what else that technology is capable of—or see what you learn by learning that—that is applicable in other ways. So for me, the art practice is a machine for generating further curiosities and literacies. By doing this work, you spill out a bunch of new ways of thinking through the world, and also new ways for myself to think about other things.

James Bridle’s exhibition Failing to Distinguish Between a Tractor Trailer and the Bright White Sky marks the reopening of NOME at their new location, Glogauer Str. 17, 10999 Berlin. It will be on view April 22–July 29.

Posted by Benjamin Busch on 4/26/17
Tags: automation self-driving cars James Bridle, video-art, conceptual, photography, digital
ArtSlant has shutdown. The website is currently running in a view-only mode to allow archiving of the content.