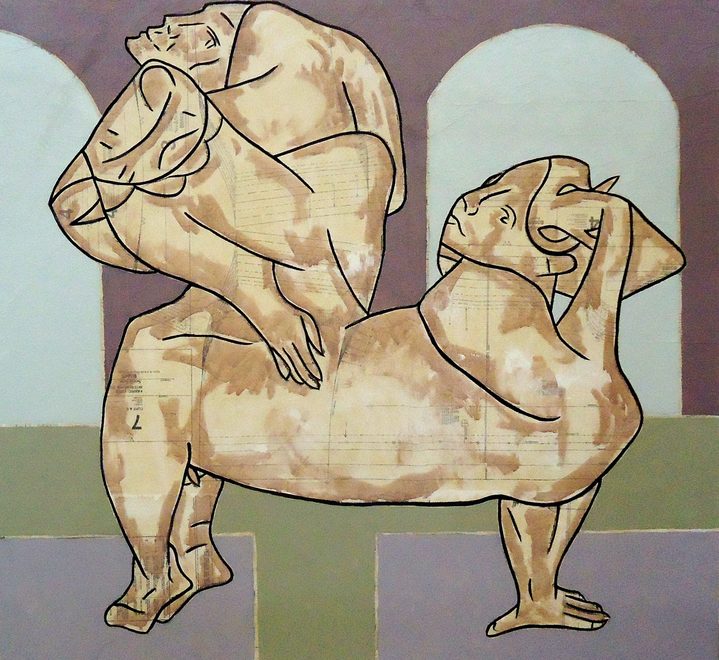 Matt Dibble has created two distinct, almost opposed bodies of work since the 1980’s. Probably he’s best known for his numerous experimental, gesture-filled paintings, wholly abstract and executed in a heavily textured, expressive manner. But if those works seem to respond to the clamor and complexity of life, his other paintings, more rarely exhibited, turn inward. They explore a tentative figural subject matter which in the context of Dibble’s abstractions is like a search for spiritual renewal. These are the works that make up the fascinating show Puzzled Bipeds at Tregoning & Co.

Puzzled Bipeds is made up mostly of larger paintings – often diptychs and triptychs, which have a public, mural-like presence. And while their crisply layered materials, attractive weathered tints and half-tones lure the viewer toward them for a close look, they remain anything but intimate. In paintings like “Dreams Machine,” “Clever Shandy,” and “Night Drill,” Dibble deploys tangled linear forms on top of physical layers of detail. These details are textual in part, recalling classic modernist collage techniques. Skin-like sheets of newspaper seal the canvas, or sometimes Dibble uses blueprints, or dress patterns. Delicate substrates of background “information” – unreadable columns of text, photographs that sometimes reveal an anonymous modern face -- act as counterpoint to Dibble’s developing imagery, which is just recognizable as the distorted outlines of human or animal limbs, knotted across the picture plane or distilled into separate creatures. If his abstract paintings bring the dimensions of life experience home in candid handfuls (or at least use painterly frankness as their point of departure), the Biped milieu is diffident and fragile, skimmed from a more subtle layer of being, as if Dibble were grafting daydreams and shadows over the gridded noise of wakefulness.

The graffiti-like drawings found on many laboriously inked medieval manuscripts -- not to mention the gargoyles perched on the gutters and eaves of otherwise gloriously abstract  Gothic structures -- remind me of Dibble’s haunted aesthetic dimension in the Bipeds images. Serious illustrations are the official “face” of a text or structure, but whimsical characters peeping out of capital letters, slithering and padding along the margins, are the personhood of the copyist monk, both confessional and artistic, offering creative comic relief and admitting messy, inadvertent human peevishness into sacred precincts. To be human is to transgress, to be bent into strange shapes -- like the animal sketched down-page in a well-known 14th century English Book of Hours, whose long neck is tied in an elaborate knot.

Dibble began making drawings of abstracted figures, single-line essays in posture and presence, a long time ago, even before he started painting. More recently he has added new drawings of that type done in ink on sketchbook-sized sheets of paper, some of which are on display at Tregoning Gallery. In relation to his Biped paintings these linear works function like musical canons, acting as core structural elements within fugue-like variations. Dibble, like many others, has observed that it’s difficult to paint or draw anything fresh when representing the human body. His answer is to bring his own hybrid population, part after-thought, part hieroglyph, to the shore of painting, creatures that aspire to a new outline of self. These refugees to the present arrive at an intersection of worlds where the rules are different, where anatomy and geometry have been oddly amended.

Paintings like “Venus Amigo,” and “Cabinet Eagle” come close to not being about the human body at all, while giving a nod to recognizable shapes like elbows and toes, or facial features. As works of art their closest categorical affinity may be to the Pattern and Decoration movement of the late 1970’s, in which color and repetition assert a quasi-animistic dynamic, inspired by feminist critique and positing a foil to the figural bombast of Neo-Expressionism. “Ancient Twisting Gladness” reads one of Dibble’s titles; exactly. “Twisting Gladness” describes the dance-like movements of this phase of his art, and “ancient” points to their most exceptional quality and real strength: these figurative patterns are like a cry for freedom, shouted de profundis, from the depths of the spell of history. Among artists associated (at times) with the P&D Movement, Nancy Spero in her margin-obsessed installations of classically-inspired cut-out figures also sees history as a palimpsest, a magic lantern of circling forms. The knotted, woven bands of opaque paint in Dibble’s almost fresco-like, frieze-frozen mummers echo the force of traditional decorative styles. Circles and loops, like torques and crowns, tattoo the pictorial surface, unsheathing the limbs of brawny ghosts.

“Modesty” and paintings related to it, featuring one or two statuesque figures presented in a geometric, agora-like public space, reveal other concerns and influences. “Modesty” is as usual based on one of Dibble’s line drawings, with a whiff of Picasso or Cocteau mixed into a fluid design that could be a Druidic cloak buckle. It’s elegiac, and it’s (intentionally) funny. In the center of the canvas an inscrutable animal-being with a human face supports itself on one hand. It twists its head to gaze backwards at a complicated alter ego growing out of its rump; it could be wearing socks. There’s a streak of savage satire here, but Dibble’s invariable seriousness about the formal balance of figure and ground, persona and associative matrix persists throughout the series. The specific canonical figures that Dibble has drawn for decades he paints now in steady quarter inch lines. They’re like hieroglyphics or runic confabulations -- part pictogram, part symbol, serving as the artist’s secret names, an aboriginal alphabet of being. Ultimately Dibble’s quest is to touch the quick of painting as an activity, when it finds a way to reach back to the world before any names. Such elusive, ineluctable truthfulness can vibrate, when the paint is right, like an urgent membrane in the soul.

Douglas Max Utter is an exhibiting painter and art critic based in Cleveland Ohio. He was educated in part at Case-Western Reserve University. Utter’s work in painting and criticism has been recognized with three Individual Fellowships and he has published several hundred reviews, articles, and essays in numerous national and regional publications.  In 2011 he received a CPAC Creative Workforce Fellowship, and in 2013 was honored with the Cleveland Art Prize, Lifetime Achievement Award in the Visual Arts.