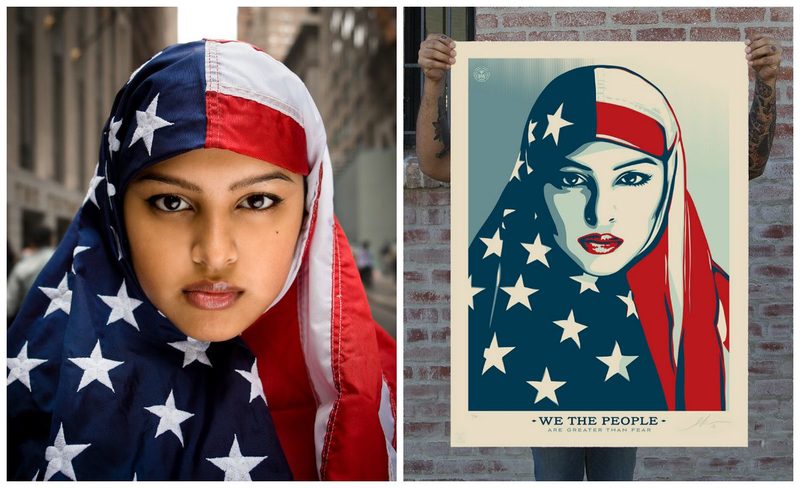 President Donald Trump’s travel ban on refugees and people from seven Muslim-majority countries caused international uproar and chaos over the past week. With Islamophobia on the rise and demonstrably influencing U.S. domestic and foreign policy, a widely-circulated image by Los Angeles artist Shepard Fairey and a related conversation about the representation of Muslim women take on additional urgency.

“We the people are greater than fear” is the slogan one of the artist’s latest posters, which hit the streets of Washington D.C. last month for the Inauguration and Women’s March. Commissioned by the Amplifier Foundation, the project “We The People,” which also includes artworks by Ernesto Yerena and Jessica Sabogal, fundraised over $1 million in a viral Kickstarter campaign. Over inauguration weekend, the foundation distributed 76,500 of Fairey’s posters in Washington alone. Eight years after his iconic “Hope” portrait of Obama, the artist is using photos of Muslim, Latina, and African-American women in America to inspire hope anew and “disrupt the rising tide of hate and fear.” 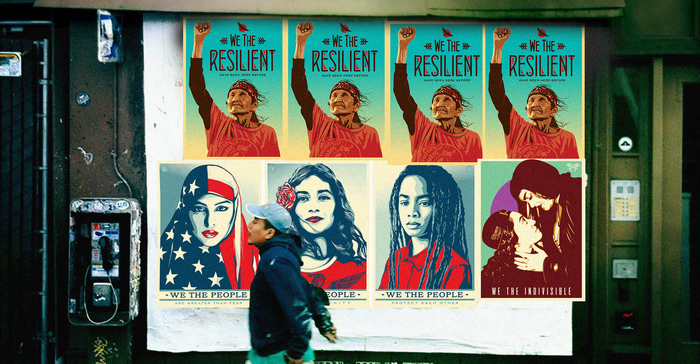 One of Fairey’s three contributions to the campaign is an almost cartoonish rendering of a Superwoman-looking Muslim woman in red, navy, and beige hues. The image is based on a photo taken by Muslim-American photographer Ridwan Adhami entitled I Am America, which was made in 2007 to commemorate the anniversary of 9/11. “I wanted to make a power statement,” Adhami wrote, posting the photo on Instagram. “I wanted to create something that we as a community could be proud of. I wasn’t apologizing for anything, I wasn’t asking to be accepted, I was merely stating that I too was an American. Wholly and completely and nothing anybody would say could take that away.”

In recent weeks Fairey’s poster has sparked debate in the Muslim community over visibility, representation, and the use of hijab and the American flag as stand-ins for “Muslim” and “American,” respectively. Mona Eltahawy, a Muslim Egyptian-American who wrote the book Headscarves & Hymens, says she doesn’t support the poster, as she fought for eight years to be free to stop wearing the hijab. She also criticized the non-Muslim women who wore flag hijabs at the Women’s Marches last month. “Non-Muslim women: in name of all that is good, stop wearing ‘solidarity hijab.’ Find another way to support & leave hijab to us to argue over,” she wrote on Twitter.

I am an Egyptian-American Muslim woman who fought for 8 yrs to stop wearing hijab & I am not celebrating this Shepard Fairey poster. pic.twitter.com/fL4ERCvWOh

Non-Muslim women: in name of all that is good, stop wearing "solidarity hijab."Find another way to support & leave hijab to us to argue over

One Arab journalist in New York City, Ghazala Irshad, also finds the posters problematic. She says a Muslim woman doesn’t need to prove she’s American by wearing a flag hijab. “I do want the media, or an artist creating a narrative about us to recognize that we don’t all wear hijabs, and there is a diversity in this community that is being ignored,” said Irshad.

Muslim Iranian fashion blogger Hoda Katebi also points out a hijab-wearing Muslim woman didn’t make the artwork. “It was created by a white man, Shepard Fairey, artist and founder of the clothing brand OBEY, created this image from a photograph taken by Muslim-American photographer Ridwan Adhami,” she wrote on her blog. “Were we unable to uplift the work of Muslim women instead? Are our images only able to be consumed when they are white-washed and sanitized?”

Katebi points out that the woman originally photographed for the image, Muslim-American model Munira Ahmed, doesn’t actually wear the hijab, “and rather just donned it for the purpose of creating this image, which is even more problematic,” she writes. “Know that the hijab—for me at least—represents a rejection of materialism, of capitalism, of euro-centric beauty standards (among other significance) and draping an American flag over it erases almost everything the hijab means to me.”

“Know that Muslims are tired of having to ‘prove’ they are American,” Katebi continues. “But also, know that one does not need to be American to deserve respect, humanity, dignity, equality, rights and freedom from hate and bigotry. An over-emphasis on being American as a prerequisite of deserving respect is harmful for immigrants and refugees.” 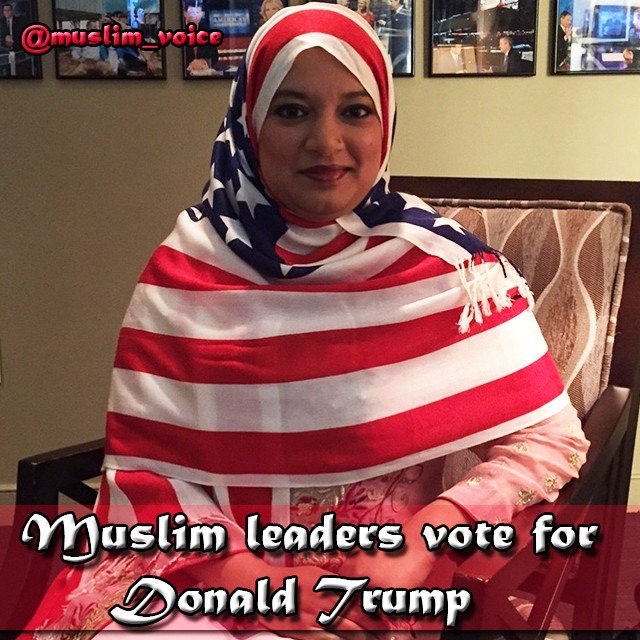 While the image is based on a photo from 2007, it also calls back to November 2015 when Muslim republican lawyer Saba Ahmed wore a flag hijab on Fox News to show her support for Trump. “It best represented my patriotism and faith,” she said last week. “I’m glad to see headscarves being normalized in America. While I disagree with Anti-Trump protestors, I am happy to see them wearing flag scarves.”

Other Muslim women also support the flag headscarf. Marwa Fidama, a fashion blogger in Dearborn, Michigan, wore the flag hijab at protests last month. “As a second generation American, the flag hijab represents me as a Muslim American and that I’m proud to be American,” she said. “I also want to show others that no matter what flag I wear as a hijab [it] shouldn’t always be questioned. I feel that it’s time for others to understand that America is a melting pot and we come in all races, religions and faiths.”

Nour Obeidallah, a Palestinian-American economics student at New York University, was also wearing a flag headscarf during the women’s marches. “When I first saw Fairey’s work, I immediately thought that I could be just like the girl in the photo,” she said. “I was so shocked at the response I got from people; I couldn't walk five feet without being stopped for a picture. It was absolutely wild.”

While other women did wear the flag headscarf at other protest marches, Obeidallah also carried a physical picture frame, which she held around her head to draw a parallel to Fairey’s artwork. “I've never related to a political image before, because nothing has ever been made that could show Muslim women in that light,” she said.

“As someone who does get scared and does shy away from things sometimes, I want to make sure I no longer do that. We as a nation cannot afford to sit back because we are too scared. I’ve always known the value of protesting and I will continue to protest and fight for what is right as long as I can.”

Posters from the “We The People” Campaign will be shown alongside the works of local activists and artists in an exhibition opening today called Hear Our Voice at the Center on Contemporary Art in Seattle. The show will feature roughly 100 works of art from the Women’s Marches in Washington and Seattle, and runs until February 25.

Nadja Sayej is an arts reporter based in Berlin and the founder of ArtStars*, check out her website at nadjasayej.com.

Posted by Nadja Sayej on 2/2/17
Tags: Shepard Fairey Hope we the people Kickstarter hijab American flag hijab Women's March
RELATED ARTICLES
COMMENTS (0)
ArtSlant has shutdown. The website is currently running in a view-only mode to allow archiving of the content.