Although Rollin Leonard is widely associated with the new media art scene, his work rarely conforms to the techniques, forms, and aesthetics that most people connect ascribe the genre. Leonard’s work presents a unique deconstruction of portrait photography. He often manipulates and abstracts his subjects beyond recognition, using traditional methods to create effects many would assume were digital manipulations. His clean, clinical presentation gives Leonard’s work both a medical familiarity and an uneasiness, which is tempered by a surreal sense of humor that permeates much of his output.

I spoke to Leonard about the development of his techniques, how he chooses his subjects, and how he thinks Donald Trump’s presidency will affect art and artists.

Christian Petersen: What were your first interactions with a computer?

Rollin Leonard: My dad made sure my brother Tad, now a programmer, and I had access to a computer early. I was eight years old and our first computer was an Intel 286. My dad was an early adopter. As an accountant he had to beg his company, an international Big 8 accounting firm in Denver, to buy a computer. They had him set it up in a mop closet and he used it to make spreadsheets. We were the first house in our town to get high speed internet (ISDN) and I was the only kid in town for a while that had a computer or Photoshop. My first memorable application was MS Paint. I made low-res drawings where pixels were blocks that I zoomed into 800% to place. I made elaborate patterns and monsters. Two decades later my brother Tad and I have started to collaborate on art projects.

CP: When did you first become aware of the possibility of using a computer to make art?

CP: You dropped out of art school. Why?

RL: I got bored and wanted to learn about other things.

CP: You got a degree in philosophy instead of art. Did you continue making work while you earned that degree? If not, when did you start to make art again and does philosophy still inform your work?

RL: I don’t make art about philosophy, but I made a lot of work while I was at school studying philosophy. It was and remains urgent to me to make art. I stopped making work for one semester because I took 37 credits worth of classes so I could graduate early, which I had to get special permission for. Fifteen credits was the recommended load. I was also working so there was no time to make art then. I maintained a notebook and wrote art ideas down. I just wanted to finish so I could move to NYC. 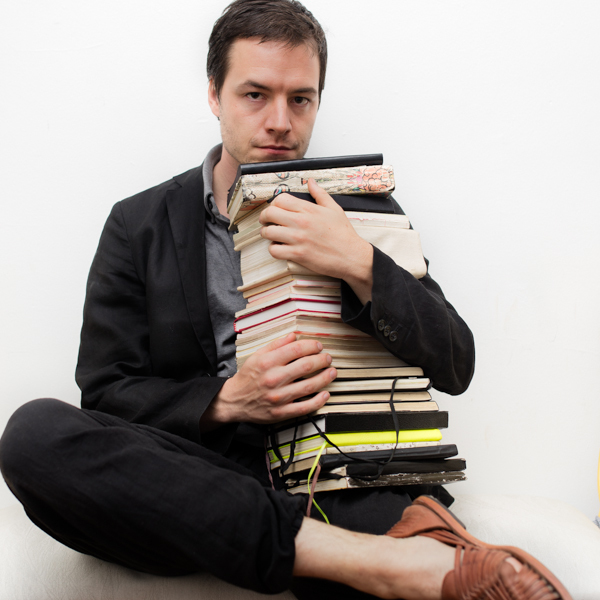 Rollin Leonard with his old notebooks.

CP: When did you start to blend analogue and digital techniques to make art?

RL: I began using a digital camera in 2004, a Minolta DiMAGE 7. I started by doing uninteresting effects with shutter speed and clumsily light painting. I made a didactic, three-channel stop-motion animation piece that “explained” itself like Joseph Beuys to a hare. 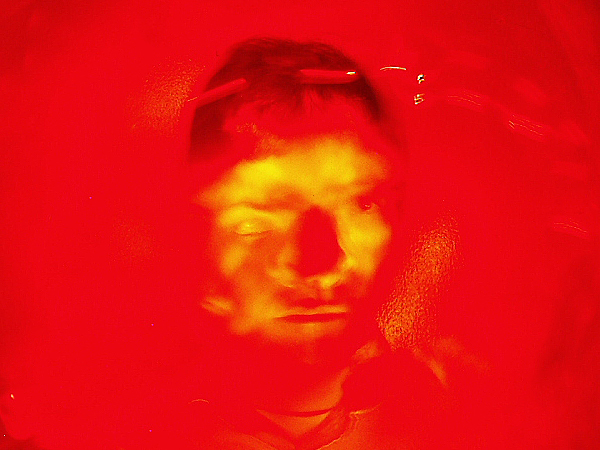 CP: When did you start using resin?

RL: 2014 for the Free-form Liquid Drawing, a self-portrait. The idea was hard won and came from a lot of failures and iterations. The final product is simple and one of the best things I’ve made. My goal was to remake a droplet of water complete with its refractory properties as something permanent or semi-permanent. Eventually, it led me to making photos through drops of water devoid of reflection or any surface detail on the water—isolating the refractory distortion only. Printed, cut out, and then domed with clear resin like a Hello Kitty sticker. This reintroduces the means of distortion using the original shape of the water drop so the underlying image and the pool of resin on top bind perceptually and physically into a semi-sculptural wall piece. 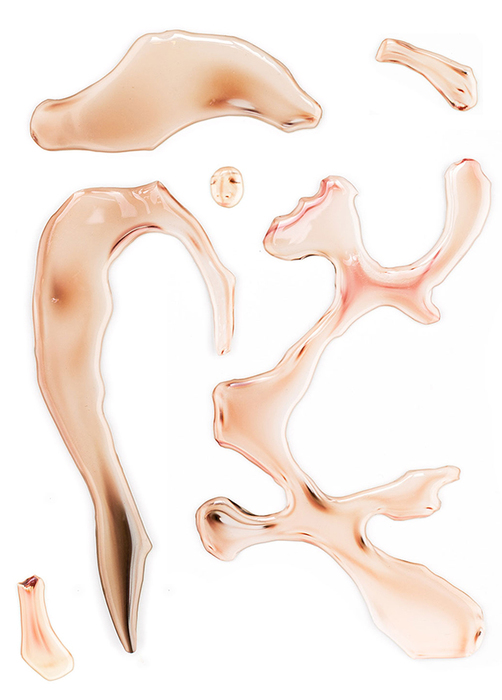 CP: What interests you about mirroring digital effects with physical constructions?

RL: I’m inspired by my peers that are into 3D, special effects, computational approaches to image-making. The growing Liquid/Droplet body of work came directly from seeing liquid effects in 3D in seemingly impossible situations. I wanted get to the point where my photographs felt equally unreal or rendered despite being made with optical, physical effects.

CP: You are a part of the new media art scene but your work is quite different to what is traditionally associated with it.

RL: I feel a kinship with net art, new media, mediated outputs etc., but I recognize that I don’t always fit. Right now I’m making quilts. In this series I see a connection to 3D modeling because that’s where the idea started—as a skin to a 3D form (specifically a cylinder). But in the end it isn’t a virtual reality experience or interactive. It’s best viewed in person like old media. It’s soft, it’s vastly detailed, and has a physical presence. 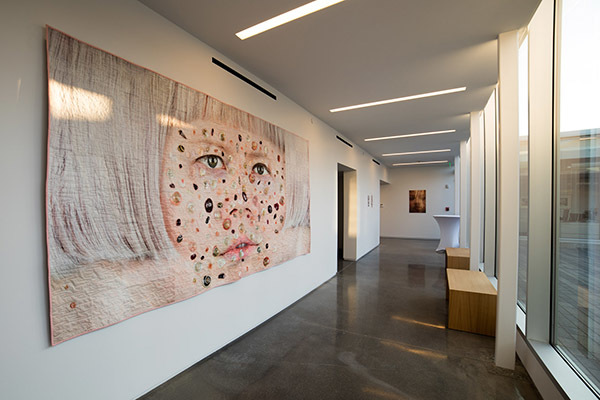 CP: There is a distinct element of humor running through much of your work. Why is that import to you?

CP: Your work also feels somehow medical, even surgical, like an abstract documentation of human anatomy.  Do you agree?

RL: I’ve studied medical photography for this purpose. Things are supposed to be proportional (except when they’re distorted), evenly lit (except when shadow is a subject), clear (unless signal noise is the goal).

CP: Much of your art could be described as portraiture. Is that a discipline that has influenced you? Do you think your images say something about the subjects?

RL: I have a casual interest despite how much energy I put into taking pictures of people. I don’t look to bring anything out in a subject. Usually, I just want them to be as stripped down and minimal as possible. My images can be personal in their approach. With the current quilt series, some of the subjects have encrustations on them that are specific to them, such the quilt Le Voyage dans la Lune. It’s an image based on the moon character from the 1902 film by the same name. The subject in my quilt, Peggy Noland, is covered with Lucky Charms, Cheerios, and Fruit Loops. It’s is a matter of playing with the specificity that the subject already has. In Peggy’s case she paints recognizable logos by hand on her garments: Snickers, Burger King, Reese, Honda etc. So having her wear individual grains of cereal was a nod to her practice. 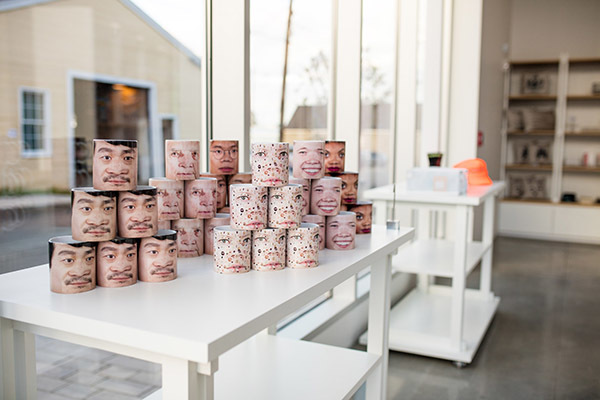 Mugs at the CMCA gift shop.

CP: How do you choose your subjects?

RL: I often get approached by people who want to work with me. Usually they have to have some basic appreciation for what I’m trying to do. Without that I don’t work very well because I get insecure and worried about people’s comfort and patience. I like to shoot other artists because they’re sympathetic to the process. Some of my best subjects are people I stopped on the street and persuaded to come to my studio. Also, commissions are interesting for me because if they care enough to give me money to get their picture taken, they’ll invariably be great to work with.

Subjects can be the best audience for my work because of their personal investment. The added layer of self-interest gets them to look more closely. Sometimes they give me direct, unprompted advice or criticism.

CP: You are also often one of your own subjects. What are you trying to document about yourself?

RL: Nothing. I’m just more willing to make myself suffer for a picture than anybody else. I’ll lay on my back on a table for 12 hours a day for 10+ days if I need to like I did for Spinning Pinwheel of Death—I would not make somebody else do that. I shoot myself when there is a high degree of difficulty or any degree of pain. Some close friends or longtime models are willing to suffer more, but I reserve the worst for myself.

Spinning Pinwheel of Death (detail), 3-channel 4k video. On view at the Current Museum of Art until December 15, 2016. Curated by Kelani Nichole of Transfer Gallery.

CP: How do you think the presidency of Donald Trump will affect your work and practice? And art generally?

RL: I read on Twitter that art is resilient, but I think that depends on who you are. It is impossible to make art if your freedom is limited. Vulnerable artists might have a harder time making work. Artists will not produce as much work if they don’t have citizenship, are unable to get an abortion, work too many hours a week, have unstable income, or directly face racism whenever they leave their house or look at the news.

CP: What do you have coming up?

RL: I would like to plug the art auction for the Center for Maine Contemporary Art where you can get a limited print of mine. I had my first museum solo show, Vernal Pond, at this institution in June as part of their inaugural series for their new building designed by Toshiko Mori. It’s a gorgeous place to see art and they have a strong program lead by director Suzette McAvoy. It is worth a visit to Rockland Maine. Or just buy the print because it’s the cheapest piece in the auction. People can follow me on Instagram @rollinleonard or sign up for my email list. Go to rollinleonard.com for links.