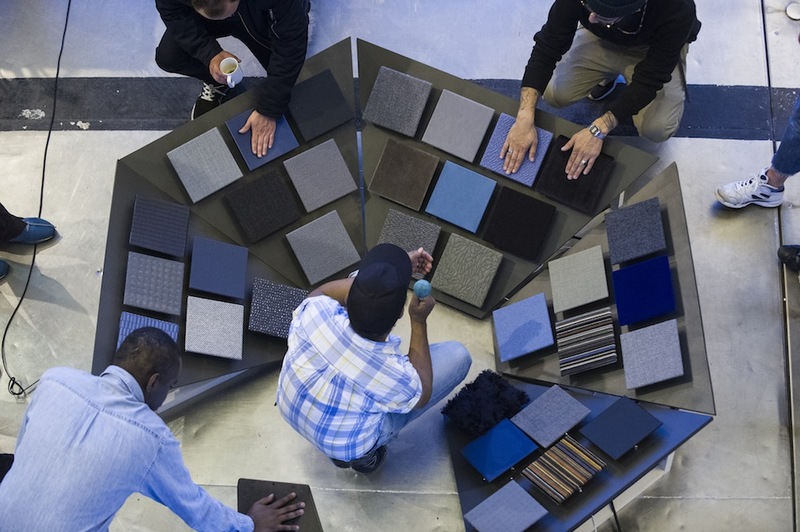 The Bergen Assembly: Translating Research into Learning, and Art

An old Norwegian woman in a green and silver Smurf costume, paint smeared on her face, is making chocolate cookies in an underground-bunker-turned-car-park. Standing behind her, contributing to the cookery process, is a parrot-masked performer, stirring the mixture and slapping flour-dusted hands together.

It’s the haphazard sort of mayhem that Marvin Gaye Chetwynd has become known for producing throughout her career, and which saw her nominated for the Turner Prize in 2012. This particular performance is the second episode of a trilogy, taking place over the course of a year as part of the Bergen Assembly, a program of perennial art production and research taking place in the Norwegian harbor city.

It all started in 2009, when Bergen hosted its “Biennial Conference” to consider the biennial format’s critical merits and flaws. As a response, the Bergen Assembly was founded with a more constant mode of production in mind. Each edition, of which 2016 is the second iteration, culminates around public programming events every three years. True to the spirit of the original conference, the Assembly is a extensive project, whose mission is as much to question and research new ways of looking at art as it is to present them. The latest edition sees three artistic directors, or “convenors”—freethought, PRAXES, and Tarek Atoui—each with their own distinct curatorial projects that are artistic rabbit holes in their own right. The aforementioned Marvin Gaye Chetwynd, and Lynda Benglis, for example, were invited to participate by PRAXES. Considering how much she had learned in her work in the previous decade, Chetwynd realized those with forty years more experience would have exponentially more to teach her. The British artist has taken inspiration from the community of elderly artists in Bergen, who helped realize The Cell Group—a rambling, weird experience that seemed to initiate its audience into a cult or activist cell. 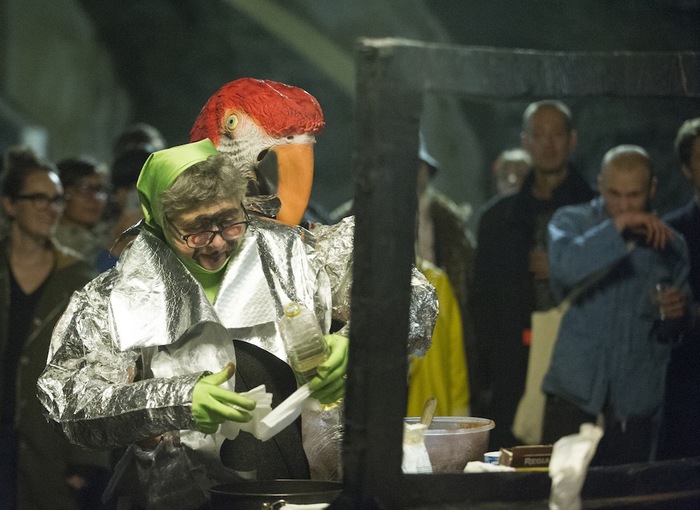 In general, the diverse and research-based approach at the Assembly means it can be difficult to draw threads from the different convenors’ work together into something more than a group of sporadic works. One point that gradually becomes clear, however, is the inspiration and education that the communities of Bergen have provided for new work by artists. As in Marvin Gaye Chetwynd’s practice, the notion of learning—but also teaching, and un-learning—is a common refrain. It seems that the Assembly’s attitude of ongoing research has infected its artists and participants: given the opportunity to create something beyond the time constraints of a traditional biennial, many of the artists’ projects engage with the local community in much more permanent ways.

For example, the six-person curatorial collective freethought chose to name their section of the Assembly “infrastructure” and consider the impact this voluminous, yet imperative, concept has on contemporary life. This loose collective of curators and academics has worked collaboratively on a project around the fire station in Bergen—a contentious site in the Norwegian city, which has burned down many times over its history, including twice in the last century. Given this background and the fact that most of the houses in Bergen are still made of wood, the older firefighters have been petitioning for the old fire station to be turned into a fire museum, for both educational and archival purposes. Freethought have built on this activism and commissioned a research archive, Isa Rosenberger’s The Museum of Burning Questions, which documents the firefighters’ concerns about the city and its needs through video and texts in the Kunsthalle Bergen. Meanwhile the old fire station itself has been turned into a café, named after and inspired by the Partisan Coffee House, a locus for idea exchange run by a group of intellectuals and artists from 1958-62 in London. 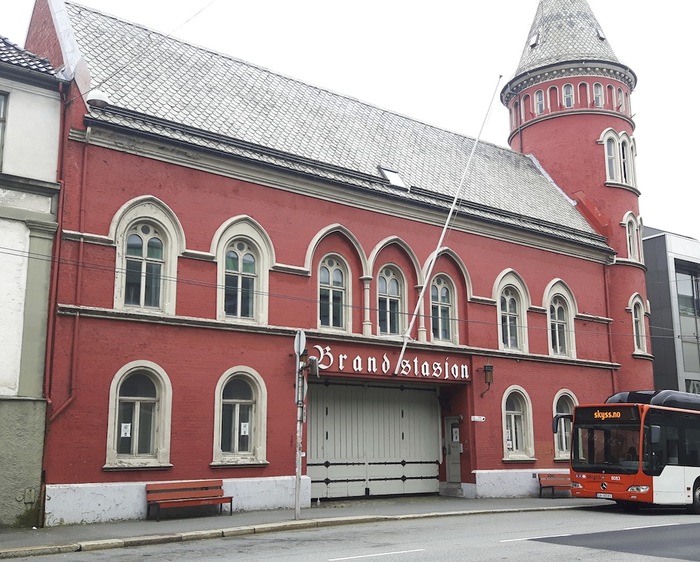 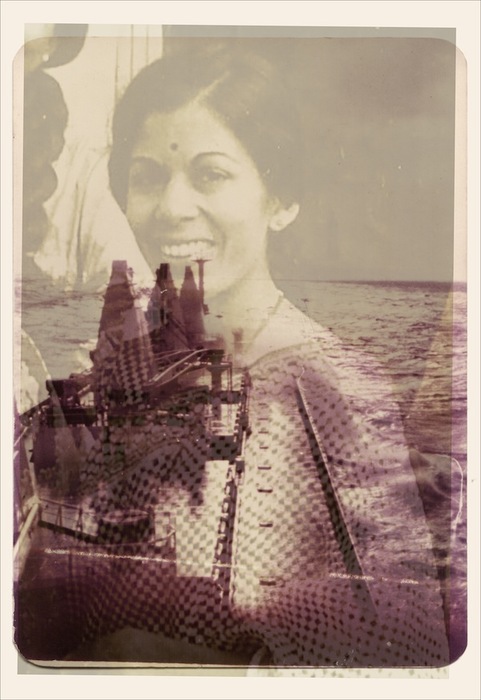 The accompanying exhibition takes several different project-based themes as starting points: Norway’s oil production, its history in the shipping industry, and Iran’s utopian Shiraz-Persepolis festival of 1960/70s. Much of the actual material exhibited is ephemera—for example, correspondence from the figures surrounding the founding of the Partisan Coffee House and its historical maintenance. This idealistic moment is also reflected in the café that the curators have instigated as a space for knowledge exchange.

In this spirit of discovery and learning, freethought seeks to bring the concerns of the academy to a more general audience, taking these research projects out of the ivory towers and into the streets. It’s a lot to attempt, and the results in Bergen sometimes reveal the limitations of representing research-based practices. While academics often think they are making things accessible to everyone, a bubble often encloses these concepts so fully that it’s hard for them to tell just how much effort this requires on the part of their audience. The sheer quantity of information required to tell the researchers’ story—museum-style tables of documents and stills from documentaries—means there’s a lot of quiet parsing to be done by the individual.

One of the more successful works is a fascinating series of videos, The Anecdoted Archive of Exhibition Lives, which asks talking heads from across the world to talk about an exhibition that shaped them and, often, their work. These glimpses of humanity, of gut feeling and reality, are all the more striking for their academic surroundings. 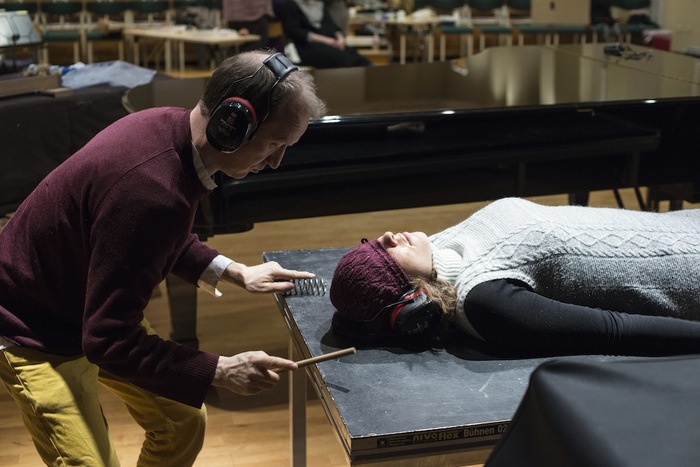 Convenor Tarek Atoui’s work WITHIN attempts to bring the work he has done with deaf people in the Middle East during his long-term residency at the Sharjah Art Foundation to the Norwegian coast. Atoui requested designs from sound artists that attempt to imagine how deaf people could best play and listen to music, without using their ears. Traditional efforts in this arena have focused on amplifying the sounds of phonocentric music, whereas Atoui’s instruments allow musicians—deaf or hearing—to play in a way that caters to the visual and tactile ways that sound can be perceived without using one’s ears. These instruments, with evocative names such as “33 Soft Cells” and “The Sound Massage Kit” will be activated through a series of performances in the month of September, including the opening night’s performance of a piece composed by electronic music legend Pauline Oliveros.

The development of the instruments was all based around exploration with deaf students in the local school, and their input shaped the design of the instruments. In one of the most exciting moments of the whole Assembly, several deaf practitioners performed the instruments. Just as in freethought’s case, involving the local community is where Atoui’s project becomes most fruitful. Turnout on the opening night’s performance certainly reflected that. At the end, the entire audience applauded using sign language: quivering their open palms in front of them. 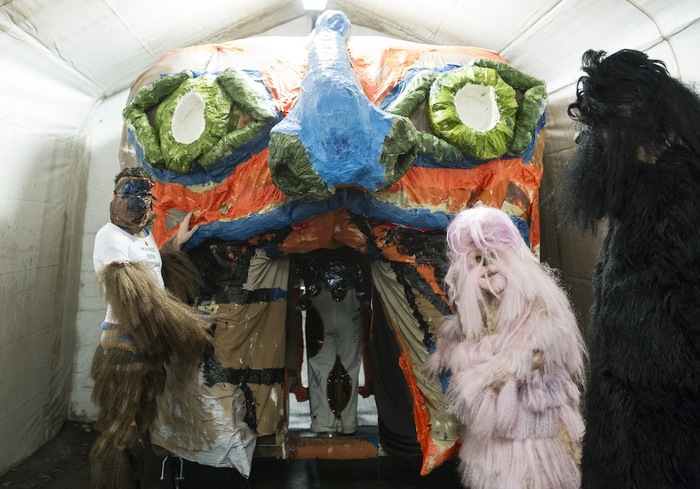 There are many different ways that people learn and come to understand things for themselves. But in order to gain a full understanding we all need to connect knowledge with experience. Feeling the learning, whether that’s visual, tactile, or emotional, is what makes education sparkle into being. At this Bergen Assembly, artists have learned from Bergen’s generous elders, students, and its buzzing creative community. The next, critical step is getting that learning across to their audience. While lengthy research and in-depth analysis allows artists and curators to get to the bottom of their craft, it asks a lot from an audience. Sometimes, we need the spectacle.

Josie Thaddeus-Johns is a Berlin-based writer and editor from London, interested in art, identity, gender and the internet. She is currently working on her first novel.

The Kochi-Muziris Biennale Take Two: Why We Need to Improve Arts Funding in India
12/11/14
COMMENTS (0)
ArtSlant has shutdown. The website is currently running in a view-only mode to allow archiving of the content.