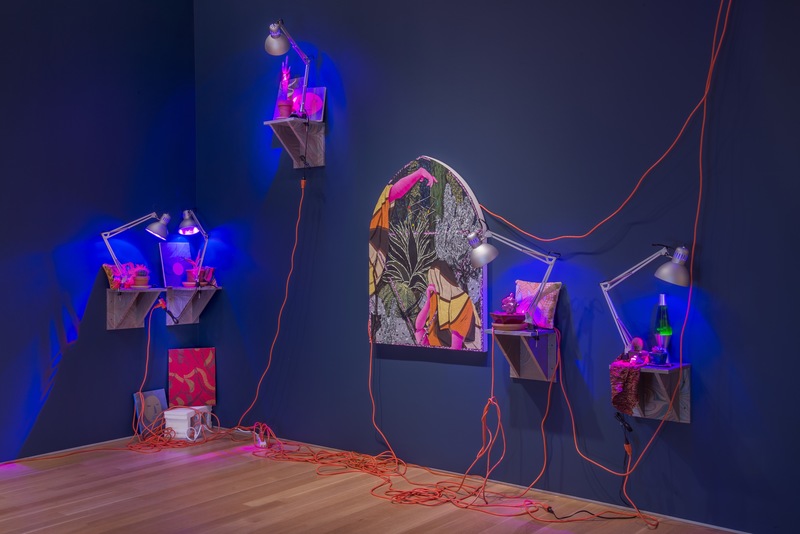 Amir H. Fallah Creates a Portrait in Cactus and Lava Lamps in The Caretaker

Amir H. Fallah’s portraits resemble the site of an archaeological dig. When Howard Carter discovered King Tut’s tomb, the young pharaoh’s body was wrapped in shrouds with his material possessions painstakingly arranged around him. Likewise, Fallah incorporates everyday objects from a subject’s home into ornate, unconventional portraits that obscure the figure’s face, finding profound connections in the seemingly mundane and charm in the ugly. It’s not coincidental that much of his work incorporates elements of collage—a medium that at its root is a collection of often-disparate objects.

The Caretaker, Fallah’s installation at The Nerman Museum of Contemporary Art in Kansas City, grapples with the human tendency to nurture the dying and the vulnerable, through an exhibition wholly devoted to local professor Mark Raduziner and his predilections for lava lamps, cactuses, and Coogi sweaters.

Fallah, who is a notorious night owl, works from Los Angeles in a home studio based in his garage. Here is an excerpt of our insomniac Skype session: 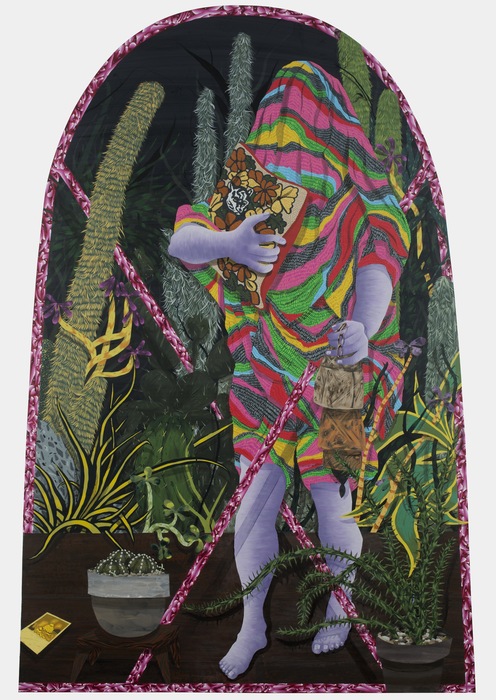 All images: Courtesy of the artist and The Nerman Museum of Contemporary Art, Kansas City

Danna Lorch:  How did you come to discover Mark Raduziner and choose him as the subject for your show at the Nerman?

Amir H. Fallah: During our discussions, Bruce Hartman, the museum’s director, had seen that in previous exhibitions some of my old installations had used plants, and asked if I had any ideas that could integrate those elements. He mentioned that he’d read a crazy article about Mark Raduziner’s cactus collection.

AHF: He has 200 plants that should have died in that climate, yet every winter before the first freeze he carries all these potted plants—which are life size or larger—inside the house, puts his furniture into storage, then turns it into a grow house with artificial lights. I asked Bruce how he’d feel about me doing a show about this guy whom I’d never met. When Mark first heard about it he thought it was bizarre, but then I spent a few days with him in his home and we got to know each other. 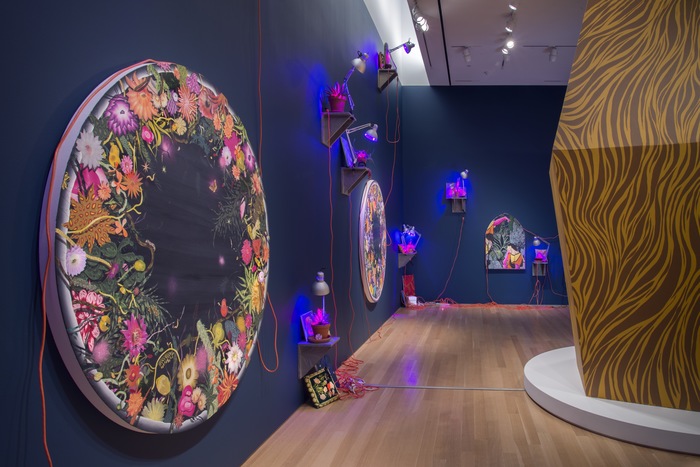 DL: Did Mark recognize himself in the show?

AHF: He had a very emotional response walking into the museum. The plants ended up being a metaphor for the idea of taking care of someone who is sick [in this case a parent] and about to die, and nurturing them. These are universal themes. Although you don’t see Mark’s face throughout the exhibit, I tried to capture his essence without showing his likeness, which is what I’m interested in with all my work. 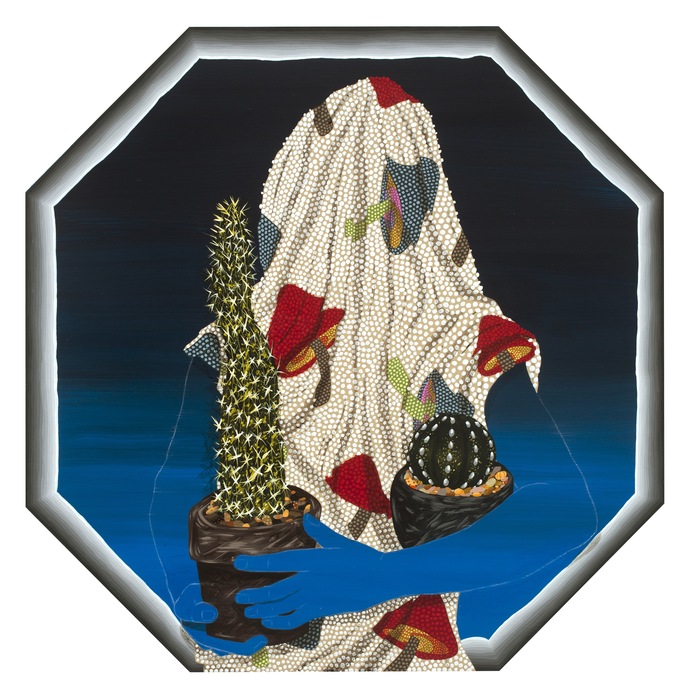 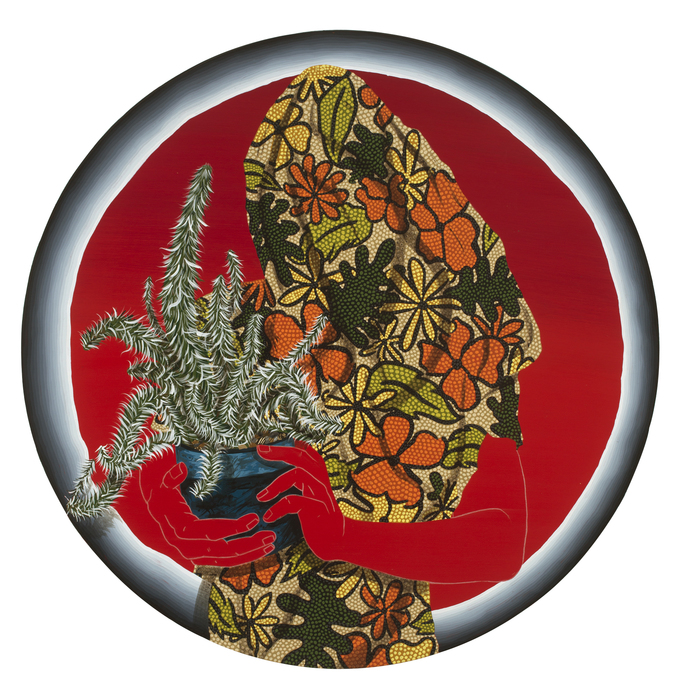 DL: Does it matter to you if the subject of your work is actually someone you have met and spent time with?

AHF: Actually, for my last project [From The Primitive To The Present] I randomly chose an estate sale where I purchased all the belongings of several family members who had recently died. I conducted an archaeological dig, and became an investigative reporter in a sense, creating a series of portraits of a family I’d never met. For me, what is exciting is the unknown. When we think of portraiture, we think of the familiar. It’s always someone posing in front of you and you’re drawing his or her likeness. I’m taking that concept and turning it on its head. 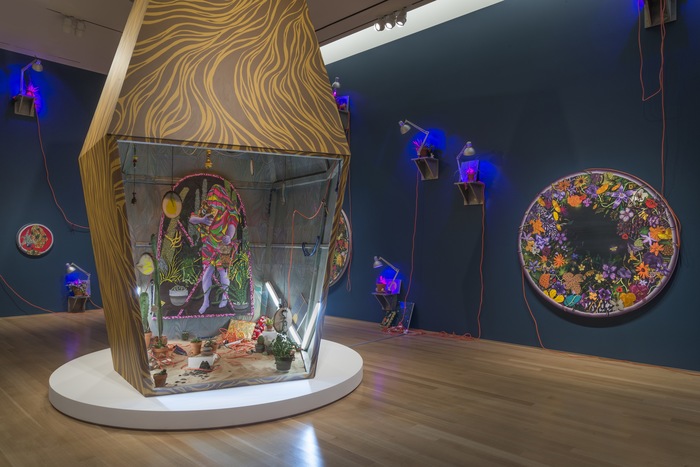 AHF: I wanted to create a terrarium that would not only contain a life size portrait of Mark, but also have a grow house for some of his plants. I wanted it to be as though he were looking over and sheltering these plants so they could thrive. The hourglass shape comes from a lava lamp, which is another thing that Mark obsessively collects in the hundreds.

DL: Now I’m picturing his house. It must be zany and crowded. 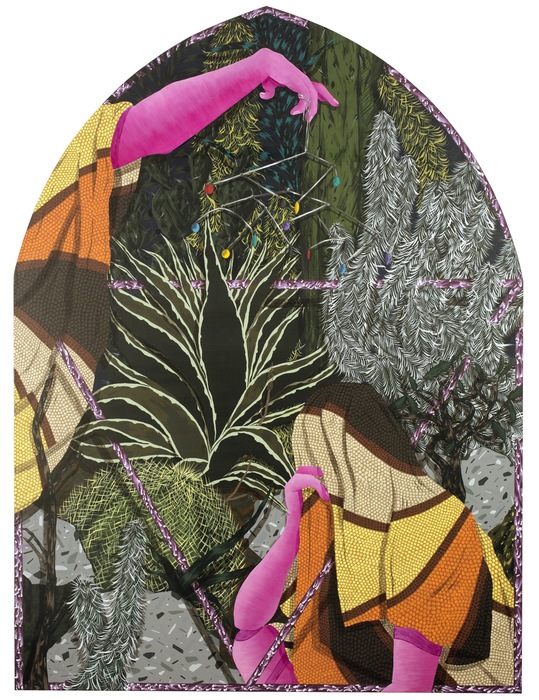 DL: Your studio is based in your Los Angeles garage. How did you prepare for such a large museum show from California?

AHF: I made the seven paintings in my studio. Then there is a large Coogi sweater tapestry, which was also constructed in LA. I had a seamstress come and help me stitch it all together, and it’s so huge we had it lying out in my driveway while we worked. 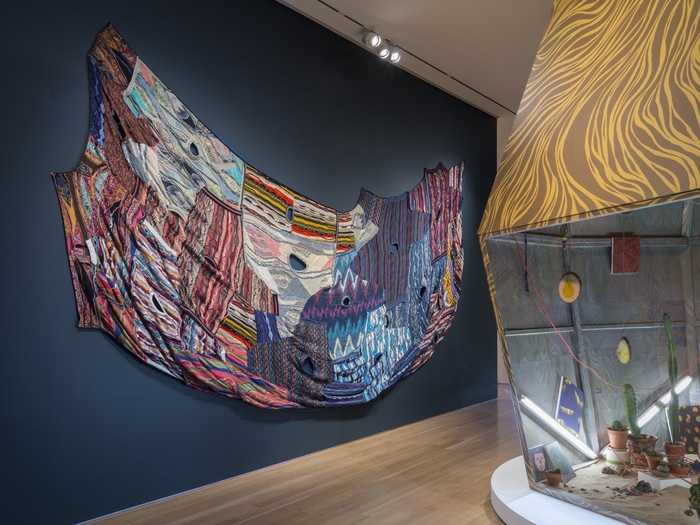 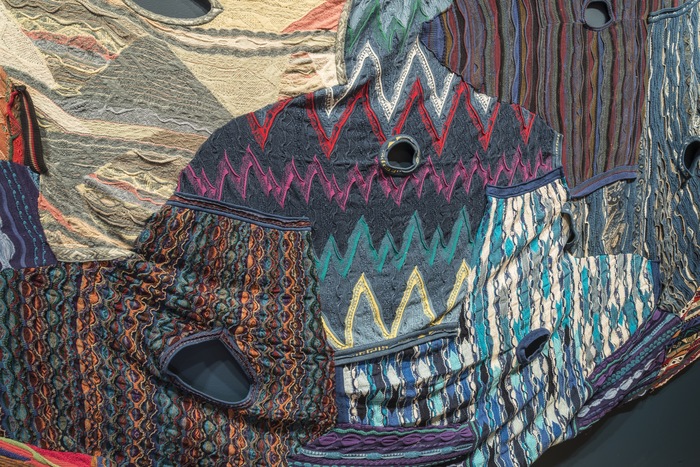 DL: How did the Bill Cosby-like sweaters come to have a place in the show?

AHF: When I was visiting Mark, I asked him if he had kept anything that belonged to his late father. He showed me this collection of Coogi sweaters, an Australian hand made wool brand made famous by Bill Cosby and Biggie Smalls the rapper. They were really big in the hip-hop world back in the day. What’s funny is Mark’s father was a Mid Western fashionista, a white man in Kansas wearing these crazy-patterned sweaters. In the big portrait I made of Mark, he’s actually wrapped in his father’s sweater.