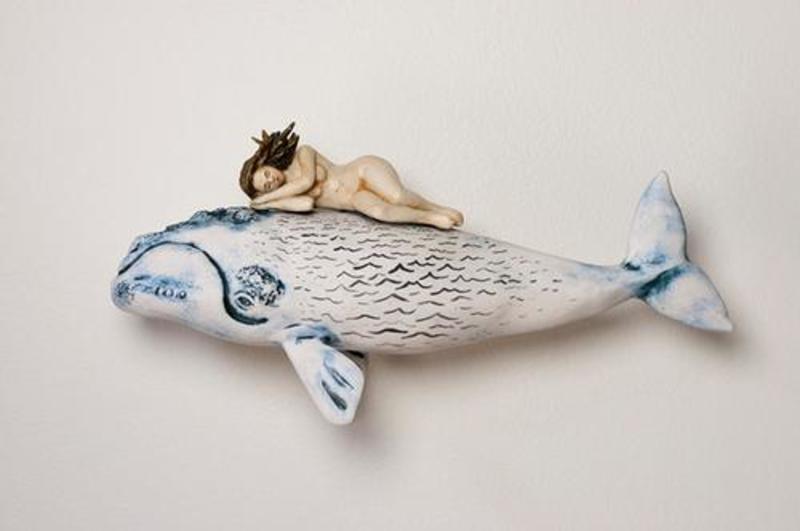 Bodies and Beings: What Place Can Ceramics Have In Contemporary Art Now?

From the didactically ornate, magical sculptures of Adrian Arleo to the pensive and powerful busts of Jacob Foran, Abmeyer+Wood gallery’s current exhibition Bodies + Beings represents a range of aesthetics that reflect the potential of ceramics today. Bringing together some of the most established names in contemporary ceramic art—including Patti Warashina and Richard Notkin—it also introduces some emerging artists working in a medium many once thought of as limited to cups and bowls. 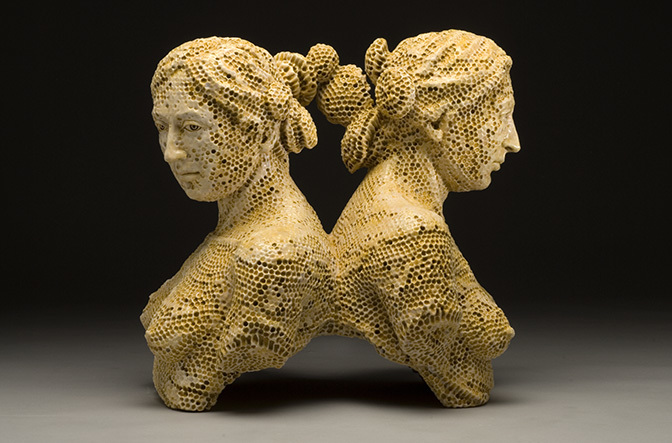 Visitors are greeted by three stunning works by Arleo: Apiary Twins, Awareness Owl II, and Reclined Lion with Interior Woman. Reclined Lion is a small, enchanting piece depicting a lion whose face displays a certain wisdom and deep sadness—evoked by traces of blue that highlight the folds in the lion’s fur. Surrounding the lion's face is an intricate mane with a tree branch motif spotted with gold at the tip of each spiraling branch; inside the space that the mane creates sits a golden woman; perhaps indicating that this lion’s strength, knowledge—and even his melancholy—come from this female element. Reclined Lion seems to reflect Arleo’s views on gender relations but quality and concept aside, the placement of her works is questionable. A friend noted that one of Arleo’s works was placed directly next to the guest book, prompting the question “was this exhibition curated by work release inmates?” 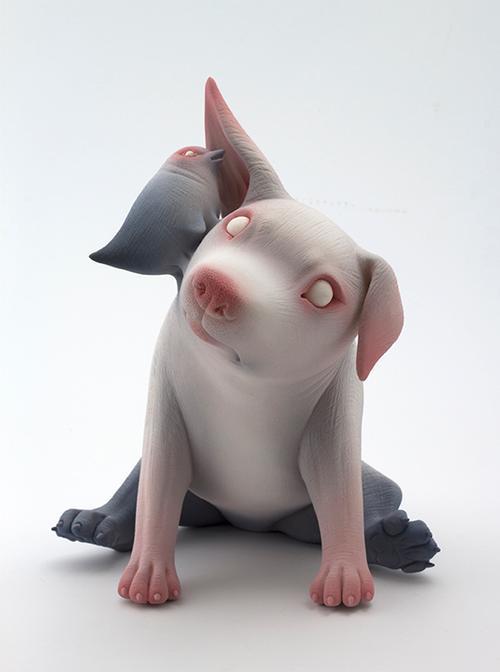 It's not a good start, and next, you land upon the diminutive faunal forms of Erika Sanada. The works are, to me, less compelling in their size and subject—more miniature decorative models rendered in clay than sculptural works of art engaging with broader questions. A number of them seemed to appeal to the "terminally cute" charm of adorable animals. 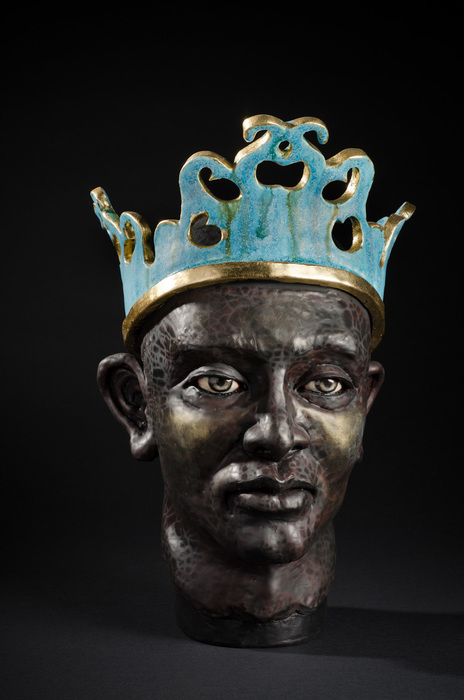 Fortunately, around the corner, the show improves. Here sit the striking works of Jacob Foran, adjacent to the hyper-realistic, politically charged Heart Teapot Petrol Hostage from Richard Notkin’s Yixing series, exploring human conflict through the unlikely shape of the teapot. Foran’s figures are technically well executed, for example in his thoughtful choice of surfaces—using glazes, paints, and gold leaf. This initial interest is preserved by the distant, yet focused gaze held by both figures. The busts have a captivating, yet aloof presence; the sense of supercilious detachment and the divergently vibrant headwear of the two pieces almost makes them seem as though they are simply playing their respective titular roles of King and Guardian, inviting the viewer to question the characters they may have chosen to embody or project in their own lives. 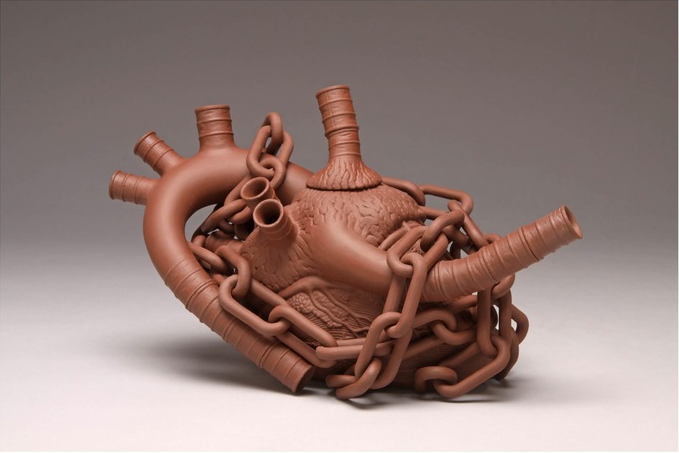 Meanwhile Notkin’s evocative sculptural pouring vessel depicts the form of a human heart with valves in the shape of oil drums or gas nozzles that also serve as the spout and handle of the teapot. Ceramic chains are sculpted around the form to indicate our systematic demand for, reliance upon, and conflicts surrounding fuel. It's a very singular piece, but the connection between Foran’s and Notkin’s works was not clear to me, and they suffer as a result of this lack of curatorial precision, despite being fine examples of the expressivity of ceramic sculpture. While there were other works that displayed technical prowess or quality in concept, Bodies and Beings could have easily focused only on the display of Arleo, Notkin, and Foran’s works, which anchored the show conceptually and aesthetically.

Drawbacks aside, though, this range of works, and its accompanying range of quality, is a rare demonstration of what clay can become—anything—but it also shows how unaccustomed curators can be to working with displays of this kind. There is clearly some work to still be done on how to get audiences to engage with this medium and its fusty reputation.

I asked Jonathan Wood, one of the gallery owners, what inspired this specific theme and he told me that he is committed to “championing ceramics and exhibiting this ‘craft’ alongside media that has traditionally been considered fine art—in essence blurring the lines of that silly fine art vs. craft debate that seems so antiquated today.” This intent in approaching the exhibition touches on a larger conversation about the place of ceramics in contemporary art. However, by focusing exclusively on figurative sculpture—which as an artistic taxonomy has never been denied the title of fine art—the exhibition seems to have evaded the issue altogether. With that in mind, the question still remains: why is ceramic art still so often ignored by the contemporary art world?

M. Anna Fariello’s essay, "Regarding the History of Objects," suggests the schism between fine art and craft resulted from shifts in thought during the Renaissance defining these categories with the development of art and art theory. This system still troubles ceramics, as many works in clay continue to have minimal visibility in museums and galleries.

Jacob Foran responded to this issue “…the truth is, the ceramics community is a small one compared to others. So, I don’t think that it is ignored altogether, it just maybe does not have the momentum or take up the same amount of bandwidth in the big scheme of things. I don’t know if it is ignored. In fact, I think it is celebrated when it happens.”

With a long process fraught with potential for failure with each firing, any piece that survives the kiln is an achievement in itself. Why then, do artists chose to work in clay when it is technically difficult, still broadly underrepresented, on top of which, it is an historically unappreciated art form? Foran shared his thoughts on this too: "I’m not sure if I could access the things in my work quite the same way with other materials. With clay, once you commit to making a thing, you immediately slow down your intuition. You can’t just raise a magic wand and make the thing appear in front of you. It can be temperamental and it is sensitive in a way. Ultimately, like any artist, I make things that I need to see the most."

Bodies and Beings evidences the reality that clay—an inherently conceptual material of the earth—can become and connect to sculpture or "fine" art. Though this exhibition may have struggled in one sense, the gallery’s choice to highlight ceramics and attempt contextualize them now is opportune, and a sign of progress. On the back of major exhibitions of late, such as Ken Price's retrospective and major exhibitions, and 2009's touring Dirt on Delight: Impulses That Form Clay, ceramics are gaining visibility in the art world. They are also earning currency in the art market, with a generation of artists like Jessica Jackson Hutchins and Sterling Ruby who fluidly use ceramics within their wider practices—and are getting recognized in big commercial galleries and art fairs. This will hopefully stimulate more galleries and patrons to move beyond the confines of tradition and engage the public in greater depth with this incredibly varied medium.