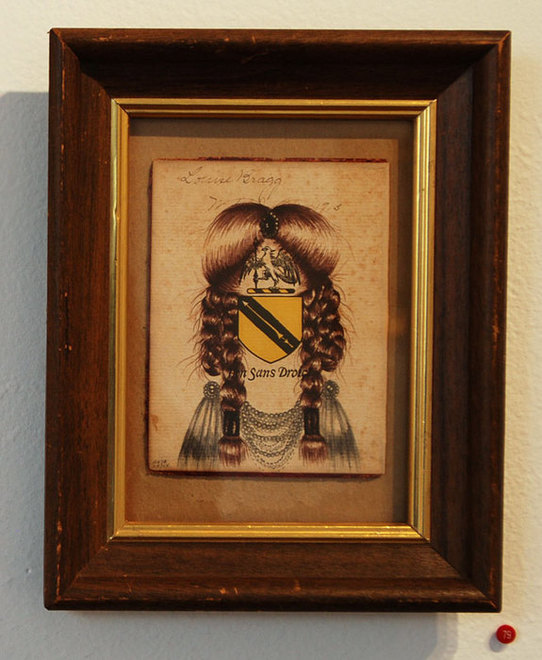 Every artist worth their salt has their own distinctive aesthetic, and that proves especially important for graffiti and street art, where artists compete directly in the public space, not only to catch the eye of the passerby but to build an instantly recognizable identity within their community. Graffiti, after all, is all about whose tag is "up" the most in a territory.

Brooklyn-based Maya Hayuk works both in the streets and the studio and her aesthetic is ubiquitous. With its pop neon palette and signature details (crossing lines and paint drips) in quilt-like patterns Hayuk’s work is distinctive or at least, easily recognizable. Or is it?

Hayuk is currently suing Starbucks for $750,000 for a design that she claims blatantly infringes upon the copyright of her art. As Wired reports, Hayuk has even named some of the specific works that Starbucks copied from—among them her Universe series.

It appears Hayuk met with Starbucks previous to the release of the new “Mini Frapuccino” cup design. She claims the company approached her for a project, but that she declined. Starbucks appear to have continued with their campaign using a very derivative aesthetic that Hayuk is claiming rips off her trademark.

It's not the first time a street artist has struggled with issues of reproduction and copyright when it comes to major companies. Sometimes the infringement isn’t so blatant—many street artists have seen their walls featured in campaigns or music videos without permission, and from which they reaped no profit. Just last year, Ahol Sniffs Glue sued American Eagle Outfitters for including his imagery in advertising and even recreating his work for an event. INSA also saw his wall pop up in a Justin Bieber video without permission.

In fact, Hayuk herself previously sued singer Sara Bareilles and luxury brand Coach for including one of her murals in their advertising campaigns. Starbuck’s offense, if true, would prove much more egregious. It’s one thing to forget to credit an artist and another to (allegedly) meet with the artist, agree to not use her services and then reproduce something very similar to her work. If Starbucks did in fact initially meet with the artist, then it’s no coincidence that their cups look like Hayuk’s art.

Of course this brings up the question: how can one be sure to not infringe on an artist’s style and intellectual property? What makes an artist’s work entirely their own, when so much of what is created now is derivative, or even quotes or borrows inspiration from other artists in some aspect? What about when the artwork is native to the street, literally existing in the public domain?

Hayuk has made a success out of her trademark aesthetic and the rip offs only come with a certain level of visibility: but the place of artists’ rights in relation to commercial industries remains tricky territory, especially when brands often turn a huge profit from visual culture.