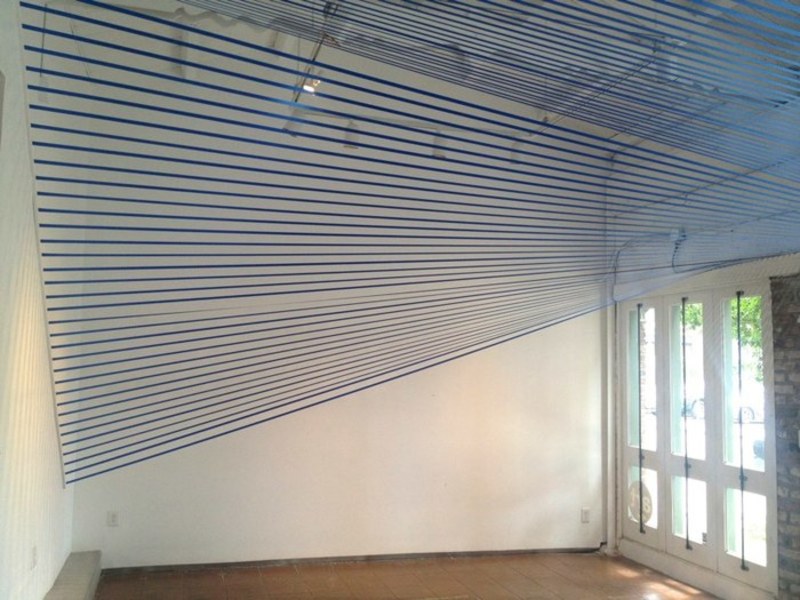 Systematic Materiality: The Artists Challenging Painting and Drawing with Textiles

Sabine Reckewell and Samantha Bittman are two artists that are each working with textiles in the contemporary moment. Using rigorous systems that require a tremendous amount of planning before making and building can begin, both artists have an acute respect for order that enables their work to conjure awe bordering on the inconceivable.

Each studied textiles in undergrad, though several generations apart; Reckewell received a BS at UC Davis in 1976, and Bittman a BFA from RISD in 2004. Reckewell was drawn to textiles after studying industrial design in Kassel, Germany, in a program that modeled its curriculum after the Bauhaus, later choosing UC Davis for its progressive faculty that pushed the boundaries of the medium from traditional into the contemporary. Many of the UC Davis faculty formed the Fiberworks Center for the Textile Arts in Berkeley, where Reckewell received an MFA as well as Lone Mountain College in 1978 (now the University of San Francisco). Bittman found herself immediately drawn to textiles at RISD and later worked in the commercial textile industry before receiving an MFA in painting in 2010 at the School of the Art Institute in Chicago. 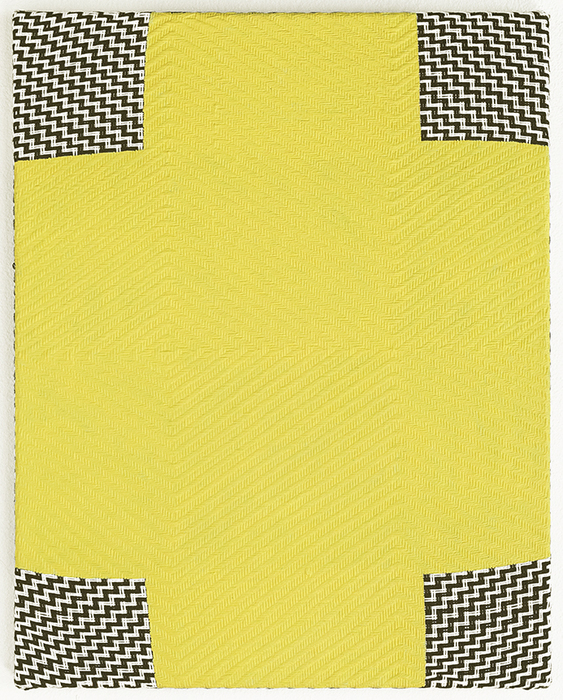 Both artists consider painting and drawing synonymous with the craft techniques that they employ. Bittman refers to her weavings as “support” for the paintings. In this way, the hierarchy of painting is upended, and the weavings not only act as the substrate where normally canvas would reside, but they also comprise the painted patterns that Bittman chooses to either trace or to paint a solid color. “Using the handwoven textile as the painting support changes how the weaving is read—or what the weaving is,” she explained in an email conversation.

Moving the weaving from a three dimensional to a two dimensional object bound in stretcher bars shifts the construction of the textile back onto itself as “the subject of the painting.” Rendering a weaving as a subject of a painting creates a reciprocal exchange between the materials and their ultimate form. The optical confusion created by painting over the weavings creates an uncanny dissonance–the eye shifts from viewing a two-tone, seemingly flat pattern to a single, color raised pattern. It is as if the weavings have a hidden dimensionality. The historical context of weavings with the paintings over them creates further symbiotic tension between the formal qualities of each medium.

Likewise, Reckewell has long considered her Linear installations as drawings. She uses ribbons, string or nylon bands as a means to 'draw' so that the installations she creates are subsumed by the materials, creating further dimensionality with shadow and activating space. Here, the desire to shift perception is plain—not in the traditional sense by attempting to draw perspective with pencil on a two-dimensional plane—but rather to pull perspective toward the viewer, into the space that they physically inhabit.

Similarly, Bittman has been working with murals recently: the patterns are digital wallpaper derived from weavings and made to-scale and sometimes appointed with contrasting paintings. Unlike Reckewell who uses the wall as an armature to hold the dimensionality of the protruding lines, Bittman’s murals maintain flatness while achieving an optical effect on the eye. Bittman, much like the Op-Artist Bridget Riley, is interested in the ways that space is perceived rather than optical illusion. 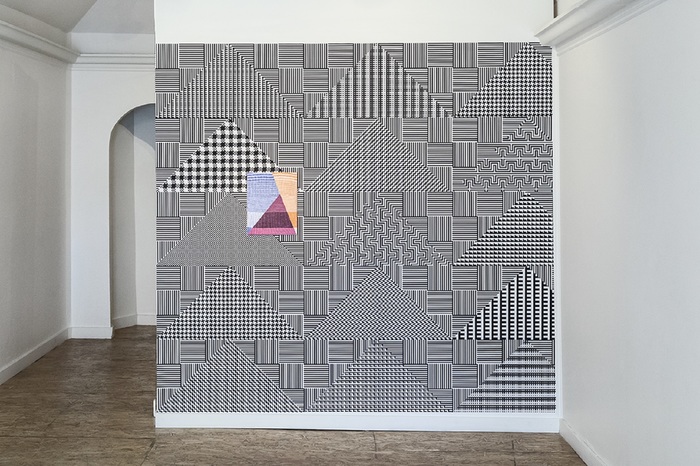 Although textiles, particularly weaving, are quite commonly considered for their soft qualities, complex structured mathematics plays an important role in achieving desired outcomes. However, within their applied systems is an element that allows the materials to just “be,” working in tandem with their calculations. For example, when Bittman paints there is “an intuitive response to the support, which may have a particular invented logic or be pattern-based,” but the painting is “not quite systematic per se,” she continues.

In other words, the weaving dictates the painting rather than both being predetermined. In comparison, Reckewell allows gravity and site-specificity to play a part in her Linear installations: “My approach is to think of some math problem that I can transform into a large three-dimensional format in the most straightforward way I can think of. The materials and colors, the repetition and a certain hand-made quality give the installations their character.” However, for both of them, there is no preconceived notion of perfection despite all of the planning—miniscule flaws are allowed and are inherent in the hand-making. For example, when Bittman’s weavings are stretched on canvas stretcher bars, the edges and sides become slightly wavered as they are pulled tight and attached to the wood. Reckewell’s pieces often utilize hand-tied knots at the ends of each ribbon or string which is then looped onto a nail in the wall. 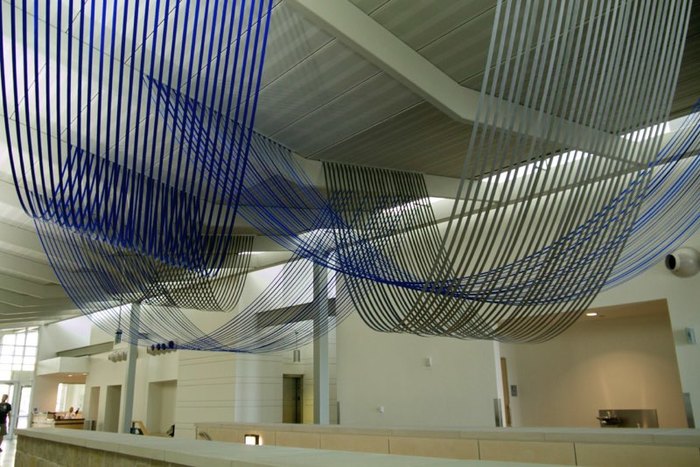 Reckewell’s Linear installations were first created between 1979 to 1981. In 2010 she began revisiting the work and creating new installations that still follow the ideology and systems of the previous work. Prior to the Linear installations, Reckewell had created large crochet squares. The series included 23 squares, mostly created with thin wire, monofilament or plastic strips. The pieces are large—ranging from 42” to 66”—encompassing the viewer’s full gaze when facing them. In 2013 Reckewell revisited the crochet square series, this time with slightly softer materials, such as leather cord. Linear seems to untangle the concepts in the square crochet work and deal more directly with space as opposed to the wall. The squares require long sessions of sitting, holding the piece on the lap whereas the ribbon installations are made away from the body, engaging the maker entirely with the space that it is contingent upon to hold its structure in place. The site-specific works take on special configurations that are only privy to their surroundings. They are immobile, and once removed cannot be exactly duplicated again—in fact, in some instances Reckewell literally cuts all of the strings during deinstallation. In this way, the squares are autonomous objects, while the Linear installations are ephemeral and therefore are a conceptual collaboration between the objects and the architecture of the space. So too, do Bittman’s murals activate space with site specificity and ephemerality. 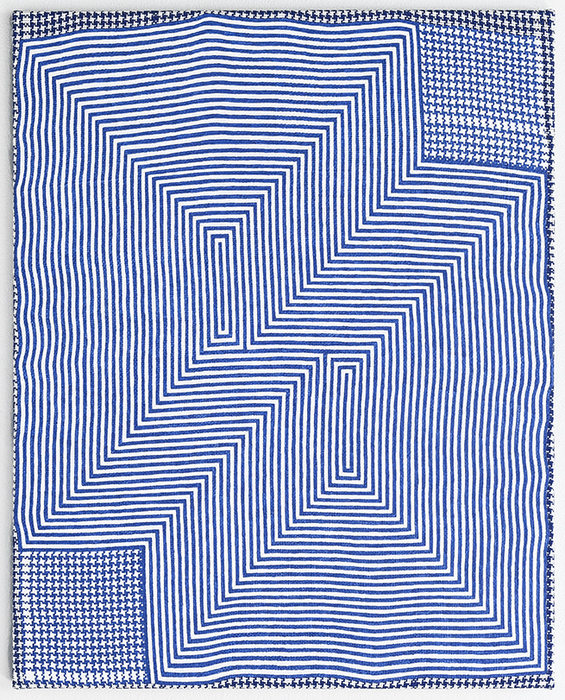 Reckewell and Bittman are continuing to bridge the conversational divide that incessantly plagues crafts. But, as Reckewell shared in an email: “This is a great time for artists working with textiles because the divides between fine art and craft are really disappearing.” Having been immersed in the textile surge of the 1970s to its recent resurgence in the last ten years, Reckewell is testimony to the changing visual and contextual dialog of contemporary art that uses textiles. “Younger artists see textiles as a rich medium to use, conceptually as well as in terms of process,” she notes with excitement, knowing that her long-studied and executed work can be seen in contemporary context alongside newer generations. But more importantly, both generational and material stereotypes are broken apart in their work, focusing on conceptual ideas and how the embedded history of materials makes for a timely conversation about new directions in painting and drawing and the various forms they inhabit.

Sabine Reckewell’s work was featured in a two person show at Chandra Cerrito Contemporary from April 3 to May 28, and Samantha Bittman’s work is on view for her solo show, Material Data at Johansson Projects until July 4, 2015. Both galleries are located in the Koreatown/Northgate neighborhood of Oakland.