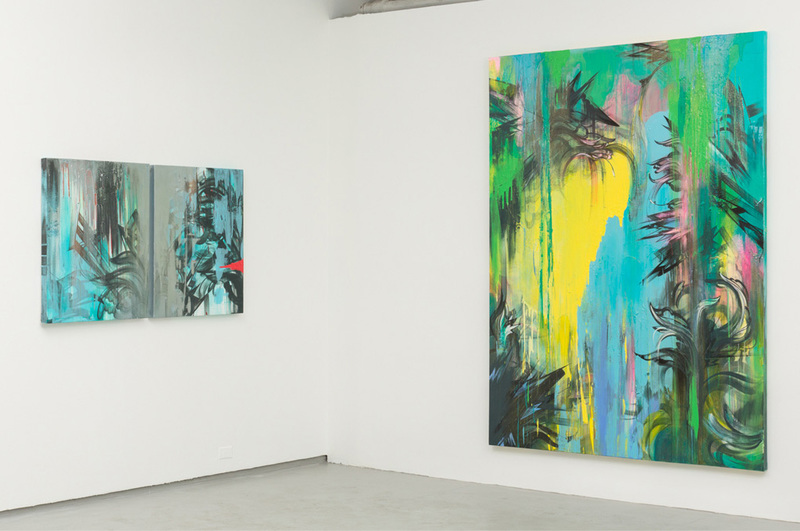 This interview really began in November over lunch at a neighborhood cafeteria in the arts district of Santurce, Puerto Rico, where I had been unwittingly served freshly grilled iguana rather than my anticipated chicken breast. Sitting across from me was Puerto Rican muralist Sofia Maldonado, whom I had spent the late and muggy morning with at her temporary studio at the Museo de Arte Contemporáneo (MAC). After a stroll through the museums’ galleries we had gone down the street to grab a bite and discuss her recent relocation back home to the island.

Sofia’s work has always been almost immediately recognizable as Caribbean—its undulating, entangled lines, bold graphic colors and vibrant portraits of local personalities are quickly identified by both Puerto Ricans and outsiders alike as steeped in this very specific culture. But for almost a decade now she had been living and working in New York City, with the occasional stint in Miami, L.A., or elsewhere abroad. Her trips home had been short and planned. Now, she’s returned for an indeterminate amount of time, set up a local studio, and started teaching at La Escuela de Artes Plásticas in San Juan.

Six months after beginning the conversation we picked up the topic again remotely while she was traveling in L.A. Having re-settled the artist talked about her anxieties about “returning home”—and her evolving notion of what it means to be local. 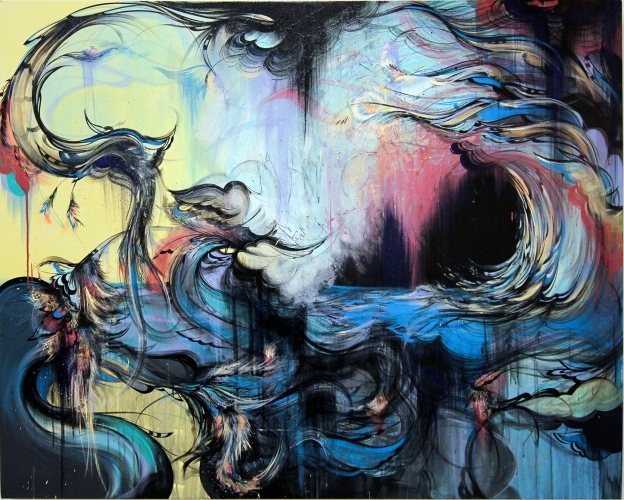 Nicole Rodriguez: So, can you actually go "home"?

Sofia Maldonado: I moved back in November and I really felt disconnected from the scene. Although I had a really potent presence back in the days, after I relocated to New York things continued to change and you begin to naturally disconnect. Coming back is a question of re-integration and trying to become more present in order to re-engage, but also bring some of that perspective and experience back with you to share.

NR: What has been people’s reaction to you returning and beginning to work in San Juan again?

SM: When you are living and working between two places, people always expect you to pick up and leave soon. You get a lot of “When are you leaving?” questions. I guess you just have to make it official like I did through Instagram. [Laughs]

NR: As a Puerto Rican—particularly a traveling artist and cultural producer—one is always caught startling lines, being a semi-local, only half involved in a conversation. How would you define local? What has that come to mean for you?

SM: It’s complex. We live on an island and are a colony, so we have this very strange colonial mentality. We are American but not. We are Puerto Rican but not. From my perspective as an artist there are many ways of being a local. There is the localization, sure, but it is entirely different to have a local mentality.

NR: This is the pitfall you were most dreading in November. Losing an international perspective by being back on the island, more isolated.

SM: Yeah. What I did after living in the U.S. for some time is to plan to come back, set up a studio and teach at the University and try to open up a different dialogue that may not be occurring locally organically. In returning, I feel a sense of responsibility, particularly for the development of the mural.

NR: How so? Muralism as a genre?

SM: Muralism, urban art. Call it whatever. Currently, there is a big local hype around the genre but I want to take the conversation to the other side of the spectrum and address a more responsible, more informed art and projects. Not everything in urban spaces needs to be a mural. It can take on many forms. This is why I titled my course "Platforms of Urban, Public and Community Art" with the idea of tracing these differences from murals to graphic interventions, public and community arts to even how to write a proposal—an element which is really missing in the education of artists in Puerto Rico. 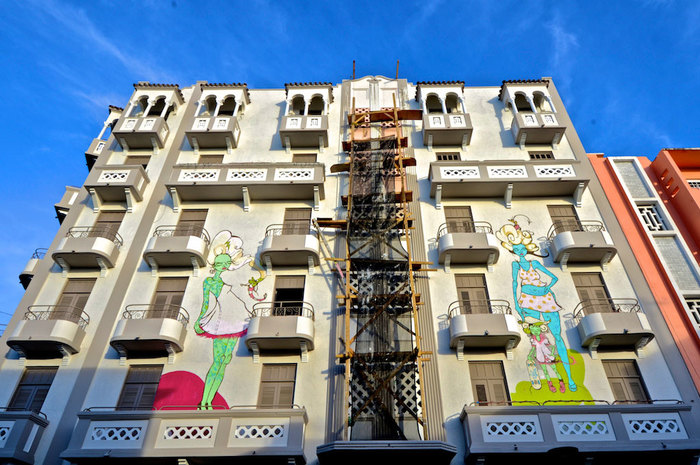 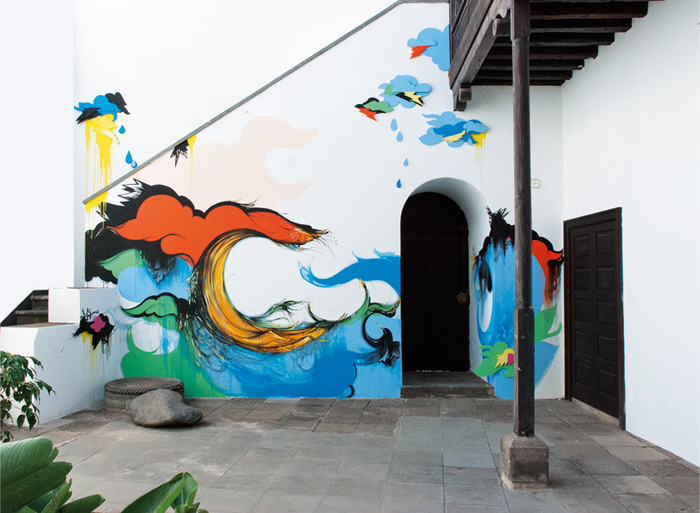 NR: How is the class going?

SM: The budget is limiting. But we recently just opened up the class and did a Skype talk. That was a very new thing for [La Escuela de] Artes Plásticas. Incredibly interesting. My focus has been really on this educational component.

NR: How is it different to produce locally versus abroad?

SM: I feel like your local community is a great place to start ideas. It’s like a restart button. You can go there and in a very refreshing and comfortable place create a new body of work. Touch base. Give back. Go away. Come back. But contribute something. What people are able to experience in Puerto Rico is very limited. You aren’t going to be able to see international artists everyday. The museums cater largely to local artists. It’s up to us with a more international background to contribute ideas we’ve experienced and bring them back to the conversation. 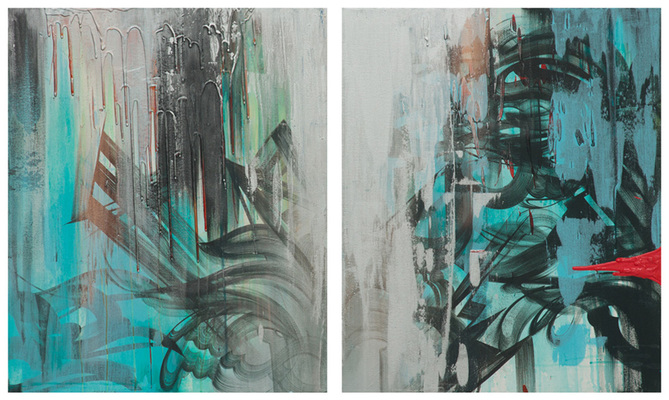 SM: To be clear there is a local dialogue. I’m not saying there is not. But it’s insular. Of course this happens everywhere. Here in L.A. right now I talk to people and people don’t really travel that far that often. It’s not like in New York or Berlin where you talk to people and they are always coming and going. “I’ve been here, I’ve been there.”

NR: But it’s different, right? If you are a local in L.A. you still have more opportunities to talk to different types of people passing through. Versus in P.R. no one is coming to you to give you ideas for free. You need to venture out.

SM: As an artist engages on a more international panorama you need to bring different influences back to the community. Juni [Figueroa] is a good example of this. He is based in Puerto Rico and always has been, but he has sought an international career that has placed both him and Puerto Rico on the contemporary art map simultaneously. By having this interaction with different scenes he becomes a bridge between a local and international community. And that helps the local ideas evolve.

NR: As a cultural producer there is a major sense of responsibility and opportunity there.

SM: Exactly. If museums directors and curators don’t travel, don’t read, don’t have outside advisors the same content gets repeated over and over again and the conversation becomes almost a parody of itself, leaving a local community visually bankrupt. For me it was really refreshing to travel to Berlin and visit spaces like the Hamburger Bahnhof where I was able to see entire rooms dedicated to only one or two works. Fresh curatorial approaches that give way to different ways of experiencing. I felt instantly how much we needed this. 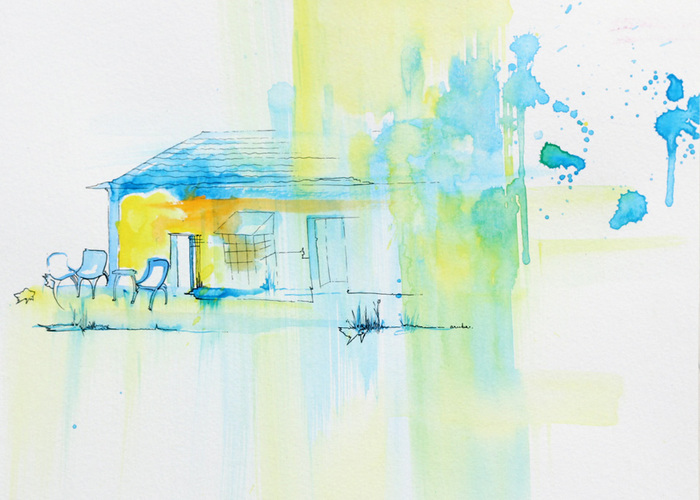 NR: Do you think there is room for this conversation in Puerto Rico?

SM: Artists like Juni [Figueroa], Chemi [Rosado], Bubu [Negrón] or myself—artists that are traveling all the time—often feel like they are not part of the local schema because the community might no longer understand where you are trying to go. So all of a sudden you don’t have space in your own country because institutions and patrons want to cater to just what’s happening there. This is an education problem. People seem comfortable with only a certain type of artwork and set of topics. Additionally, there aren’t many spaces to exhibit; there are only maybe two galleries that have an actual international dialogue and if you are none of those then you have to escape. And make your own path.

NR: Do you think the lack of outside references can kill local creativity?

SM: Definitely. Without any visual education or more involved global perspective you begin to make your own rules. The fear is that you become increasingly irrelevant to what is happening on the international arena. 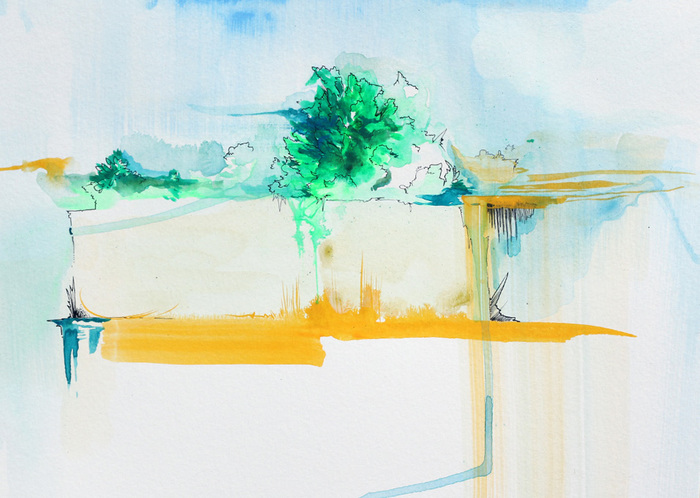 NR: What is needed in order to make your own path?

SM: We need creatives with different mentalities. After six months I can say that I feel pretty comfortable and engaged in what’s happening on the island. Though I’m not rooted to the local discussion like I once was, I’m creating my own space. I think that’s important. And in the end that’s the nice thing about Puerto Rico. You have that possibility. So for the moment I’m creating projects, documenting, all with the idea of having it exported. I’m looking into giving a course at the University of Puerto Rico with a cycle of international conferences about the "public" and the "ephemeral"—a conversation that still does not exist here. I’m also pitching for a project in Caguas—actually I have a meeting with the Caguas city major coming up. My plan is to take an abandoned building before it gets remodeled and do a painting and installation project alongside a series of workshops touching on themes of the local economy and how prevalent abandoned buildings are on the island. This will be sometime this summer.

Puerto Rico is a studio for me—a project generator. So for now: to be continued. Let’s just wait and see.