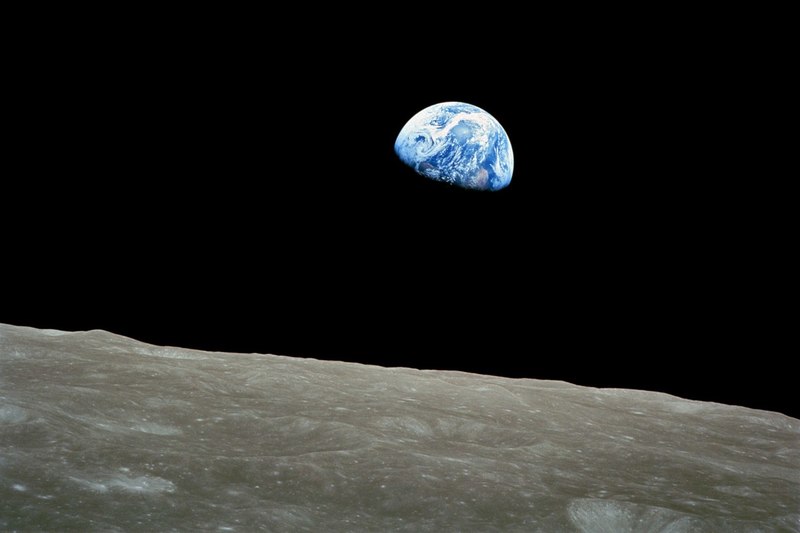 You are standing in a field looking at the stars. Your arms are resting freely at your side, and you see that the distant stars are not moving. Now start spinning. The stars are whirling around you and your arms are pulled away from your body. Why should your arms be pulled away when the stars are whirling? Why should they be dangling freely when the stars don't move? Local physical laws are determined by the large-scale structure of the universe.

So here we are, algae in water, growing out of stillness and forming slippery connections everywhere. As we slither, rust, and our stomata breathes, we form mycelial nets, so that we, eukaryotes enclosed in membranes, are inextricably linked with the water, the rock, the air, the ether of every interface with which we exchange nutrients.

Let us then imagine that these membranes are neurological molecules of the mind: consciousness. We live the world in a complex web of neurons—synapses—transmitting signals across millions of meters in minutes. We and the world activate each other, forming cross-signals: axons of information and intuition brushing up against each other to form filaments of what we call “experience.”

The local and the universal host each other: we will see three variant instances in which this occurs across disciplines—language, music and the (pseudo)sciences—such that the parts of each piece necessarily create and are created by (or destroy and are destroyed by), the whole.

In Mr. Palomar, Italo Calvino divides the book into three sections, each containing three sub-parts which in turn contain three super-parts. This geometric structure begins to mimic the story itself: there are three entities that allow the story to exist. These are Mr. Palomar, the world, and consciousness. Calvino delineates the structure in the book’s index, in which the three sections function alternately as visual, anthropological and speculative narrative. But these definitions progressively blur until the world simply cannot exist without Mr. Palomar thinking it into being. When he thinks of death, he dies, and the story ends. Not only is the self dependent on the world, it impacts the world. The story’s mechanics also begin to mimic this: its super parts quickly make up its primary categories.

Oulipian writers such as Calvino were writing at a time when they could already foresee a systemic technology—the internet—overwhelming distinct experience. Thus, ironically, the novel’s mathematics do not flatten the “I,” but rather enhance its inherent delusion. 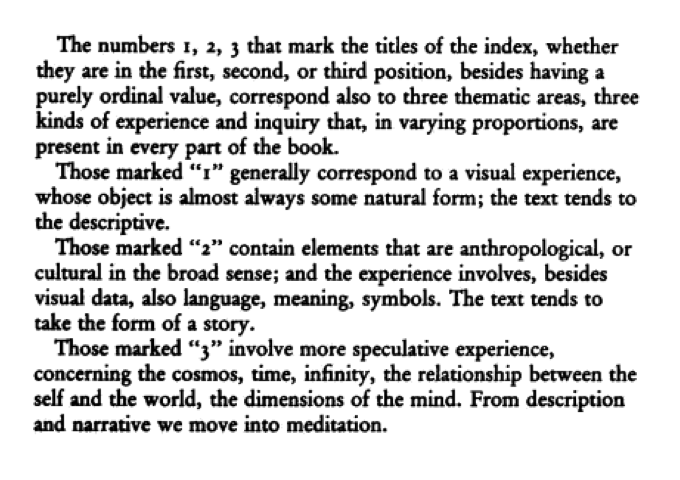 Bertrand Lamarche, contemporary artist and 2012 winner of the Marcel Duchamp Prize, describes, in his drawing Time-Travel Theory, the dissolution and resurrection of the self as it listens to music. The tension of the work itself lies in its schematic romanticism, its false rationality, and minimal anthropomorphism.

The progression of the piece is as follows:

You hear a piece of music for the first time.

You have the uncanny sensation that you’ve heard it before.

Your present self crashes into a past axis of time.

You feel unlike yourself, transformed.

But this state of metamorphosis is in constant flux.

Even as you bump into the past and stumble upon the present, the future is upon you, and you begin spiraling toward it, looping over and over again. Your eternally recurring present changes the past.

The past is no longer the past.

All norms of time collapse, as do you. You fall. You spin about your own axis.

A vinyl, except not concentric, but eccentric, unstable, de-centered.

You feel as though you live outside of society.

Your inner life and the event of music, the emotion, or the melancholy it induces, creates an aberration in conventional protocol. 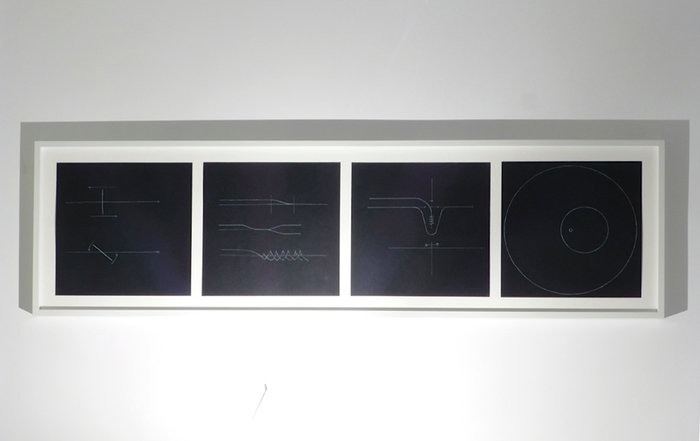 Like Mr. Palomar, who feels exterminated from the world, the “self” in this drawing, pivoting inextricably on the axis of time, is affected by an experience outside of it so much so that the self merges and becomes the music by which it has been transformed. Walter Pater described music as the highest form of art because its form is indistinguishable from its being. The self, upon listening to a piece of music, becomes the music.

Now, to extend the local to the galactic, then watch as the galactic collapses into a single point: does outer space exist because we do? How can we escape from the egocentricity that dawns from this perspective? Where there is no consciousness, is there anything at all? How do we know? Kenneth Goldsmith, in Uncreative Writing, describes knowledge in the digital age as tucked in code behind images. He makes an argument for the creator as perpetrator of crafting information from the world: “The thought of all that invisible language racing through the very air we breathe is overwhelming: television, terrestrial radio, shortwave, satellite radio, citizen band, text messages, wireless data, satellite television, and cell phone signals, to name but a few… I’ve transformed from a writer into an information manager, adept at the skills of replicating, organizing, mirroring, archiving, hoarding, storing, reprinting, bootlegging, plundering, and transferring.” In a sense, Goldsmith refers to scale, to bring the great out there here.

The video below reflects the event horizon of knowledge itself and in doing so, interrogates lost archives. Utilizing an image capture of every black hole on Google’s search, the experience of outer space flies by in a whirl, simulated neons and imagined voids absorbing everything that is imposed upon us. The images we have of black holes are merely the face of the black hole, the event horizon, past which we have no knowledge. The black hole devours everything around it. A massive topology collapsed into a single node.

The speed and repetition with which the images disappear begins to mimic memory itself: how we put away moments, how we grasp the past, how it repeats and how, repeatedly, we loosen the webs that we forget to remember. As pieces of darkness with high gravitational pulls that seem to bend light and devour stars, black holes appear as monsters of the night. We experience this sensation, perhaps, in our everyday lives. Massacred ideas, hopes and dreams hanging on a horizon long-gone. Dead spaces in our minds when we have read too much, dark places in our hearts when we have loved too hard. Such is a black hole that arises from too much gravity: a nothing created from abundance, a conjunction that fragments a sentence, a truth seen via a lie. Knowledge lost by forming.

But there are holes everywhere. The great outer space, the whole world and our individual selves are carefully connected, yet there are points of missed contact, interrupted relations, fault lines. But these breakages also begin to look like us: an individual’s inner fault lines, a psychological disruption. The local and the spatial mutually create and destroy each other.

In order to write this, I deliberately chose the pronoun “we.” The self, no longer separate from the global, must address itself in a kind of simultaneity, a togetherness that bears responsibility for “our” actions, creating a very specific phase in time, the Anthropocene. Every step we take/make affects the global whole. Later, satellites will be seen as stars. We are not separate from space.