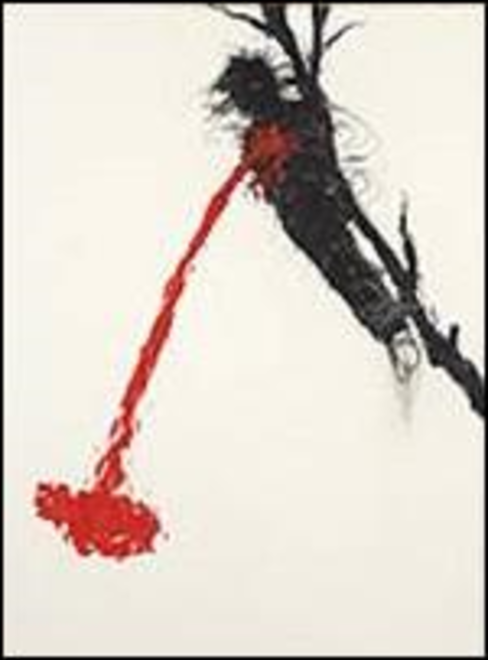 James Baldwin wrote, "The purpose of art is to lay bare the questions hidden by the answers." Few galleries of art hold true to that magnetic north like the recently opened Ethelbert Cooper Gallery of African & African American Art at Harvard University. In this space, stories dance. Tales unfold, enlightening and reminding of the African diaspora and its hopes, dreams, visions and tears. There's heavy traffic in such endeavors, with much wreckage on the roadside and splinters on the rocks of those beckoned by the Lorelei. One does not just "put up a show" when it comes to such undertakings.

This shop, however, appears to be moving on up and forward, if you will, having opened in late October of 2014 with, Luminos/C/ity.Ordinary Joy, 98 selections from the Pigozzi Contemporary African Art Collection, the largest of assortment of such art on the planet. And in these daring cases in particular, the works, the very exhibitions themselves strike a Janus-like pose, looking back and forth, with glimpses of the prophetic. This inaugural exhibition, with its dramatic intensity, was co-curated by architect David Adjaye and Seattle based gallerist Mariiane Ibrahim-Lenhardt, and chrystallized the vision of Henry Louis Gates, Jr., Alphonse Fletcher University Professor and Director of the Hutchins Center for African & African American Research at Harvard. To label the man, 'godfather' of this enterprise, the only one of it's kind nationally, would be an understatement. His vision and efforts in making this a reality are intriguing and write worthy, rich in stories of their own.

Two pieces capturing the imagination in the Luminos offering were Cheri Cherin's, Untitled 2008, acrylic on canvas, pastels and Bicicleta Rural/Rural Bicycle, Wood and rope, demanding a presence of their own. Cherin, of Kinshasa, Democratic Republic of the Congo, concentrated, according to Ibrahim-Lenhardt ",...the essence of the idealized city in Africa, presenting architectural motifs of the urban space. The piece", she continues "is articulated around a number of elements, part of a well functioning society. Its composition echoes the different phases of the economic system from the exploitation of natural resources to consumerisim."

Taking us further, "Tito Mabota creates a work using an ancestral technique consisting of free-metal design and excluding manufactured fixture."  The huge installation/sculpture, claimed a space of it's own.  "The method he used is traditional and a homage to the savoir-faire from the rural world. The bike is the most reliable means of transportation, not using gasoline or electricity." She continues, " Mabota is from Mozambic, and has lived in in his home country during the civil war.  The Bike also symbolizes movement, independence and escape."

Comes now, Drapetomia: Grupo Antillano and the Art of Afro Cuba, curated by Harvard's Alejandro de la Fuente, Robert Woods Bliss Professor of Latin-American History and Economics Professor of African and African American Studies and of History.The emotional connects of the exhibitions, artists chronicling similar patches of ground with different tools, in different hemispheres is unique. And for the viewer, exploring the meta socio-political of the African diaspora via such creative vehicles, cements the Gallerys' place and direction,  which, at this point lets say, Mr. Baldwin would find gratifying.

With his passion for the project evident, Professor de la Fuente sees, "...  a rescue mission. When I learned about the existence of Grupo Antillano and of the Afro-Cuban movement they created in Cuba between 1978 and 1983, I was frankly ashamed that had never heard of them. The current show was born out of that realization. I fell in love with their work and their history." The historical time frame and impact of this drive was narrow.Their urgency to stress the relevance of African and Afro-Caribbean impact in post-revolution Cuba drove Grupo Antillano to posture as a force integral to the national character. Yet censorship introduced hostilities, and neither, "this 'new art' nor the very existence of Grupo Antillano are remembered today.  Social movements, as revolutions, tend to have their ways, offering little wiggle room.

Rafael Queneditt's (founder of Grupo Antillano), Resurreccion (Resurrection), 2013 Mixed media installation, 96" x 70". (detail), visits the Cooper. "On a very literal sense, this "resurrection" refers to the opportunity that this exhibit has created for Grupo Antillano to come together again," de la Fuente tells us. "But this piece also captures many of the original concerns of the group. The piece consists of an angel which boasts the colors of the Cuban flag. Behind this catholic angel, however, there is a cross that is, at the same time, a slaves' stock. And behind the cross, hidden, there are symbols of several orishas (Oggun, Oshun, Eleggua), Yoruba deities of Afro-Cuban Santeria. So Cuba may look Catholic or Christian, but deep down Cuba is African".

Alexis Esquivel's, War Postcards, (Postales de la guerra) Acrylic on canvas 51" x 761/2", further draws the viewer into the history that, "Cuba", the Professor explains, "was deeply involved in decolonization conflicts in Africa (Ethiopia and Angola, especially) between the mid-1970s and the late 1980s. When in 1988 the accords granting the independence of Namibia were signed in New York City, they were signed by three parties: Angola, South Africa, and Cuba." He continues, "This was only a new episode in a long historical thread of contacts and exchanges between Cuba and Africa, of course. As usual with Esquivel's work, he ignores temporal and spatial boundaries to suggest connections and narratives that are not obvious to most of us: each of his paintings is an invitation to learn more about such links. The image of the Soviet soldiers at the forefront, accompanied by seminaked Angolan women, suggests that despite the rhetoric of communist internationalism, some profound historical linkages between the west and Africa continued to shape these exchanges. Angola's participation in the Cold War was a new phenomenon, but Esquivel is telling us that there is much in that conflict that was not new in fact, but deeply traditional. The animal and floral allegories point to the coexistence of these different times, to a time that is non linear. This is the time of colonialism and of the European presence in Africa."

Illin' emerges in both exhibitons, in the form of guns and uprising in the flavor of ultra violence. In the near genius of the works, one comes to smell the bad cologne and wiffs of cordite. "Some of these connections can be as surreal as a President Agostinho Neto of Angola attempting to ski in his native land, dressed for the Soviet winter", de la Fuente adds. "Or a rhinoceros that coexists with a Soviet-made Kalashnikov, the famous Soviet Ak-47 weapon, a modern technical marvel. All these times, images, objects, and peoples--from a South African rugby player to Angolan President Neto, to a humble semi-naked villager from Angola--come together in a tense, problematic, conflictual space. What do a rhinoceros, a skiing president, a naked African woman, and a Kalashnikov rifle have in common? There is something of a deja vu in this painting.  Alexis is telling us we have seen this before."

In the Luminos' series photography series, Dying to be Men, Kudzanai Chuirai caricatures the political class of the Mugabe regime. "The guitar, emblem of entertainment, plays both the role of amplifier and attenuator of their egocentricities", Ms Ibrahim-Lenhardt reminds us. "The use of guns, displayed or carried, reflect in this context the lack of a democratic system, also the cult of personality. In opposition, guns in USA are legal. We were interested in creating the dialogue of the use of guns in visual arts and their context", she moves on. "The portraits of armed youth evoke the continuum of despotic regimes that young people only know.  Chuirai denounces the transmission of violence and power. The use of authority to achieve personal gain is accessorized with the accumulation of sordid costumes... fur and guns." It's off the hook...scarry.

For those in search of art as objects for aesthetic enjoyment alone, the Ethelbert Cooper Gallery, and these exhibitions may not have been, or be a fit. They are not for the feint of heart, and as the diaspora itself, is hardly filled or over the top with pleasantries. These works snear as well as shine.There are linkages, whatever side of the revolution the viewer comes down on. And the art and themes of this new place are to be appreciated by scholars, aestheticians, and laymen alike. There are magnificent lessons to be learned, those of which the elders spoke and the poets sang.

At the Gallery opening, Professor Gates brought to mind Alain Locke's 1936 essay on art in which he said, "You should be modenistic...by being modernistic you are being African." This is well done. Still, nothing can prepare the viewer, us, the visitor, for that eschatological banquet, that flash-bang moment when the saints come riding in and the shit really hits the fan, as it does in some of these pieces and from some of the places they come from. Yet here, we are served a privileged glimpse. And on that front as well, the Ethelbert Cooper Gallery receives a flashing green as it moves forward.  Alueta continua.