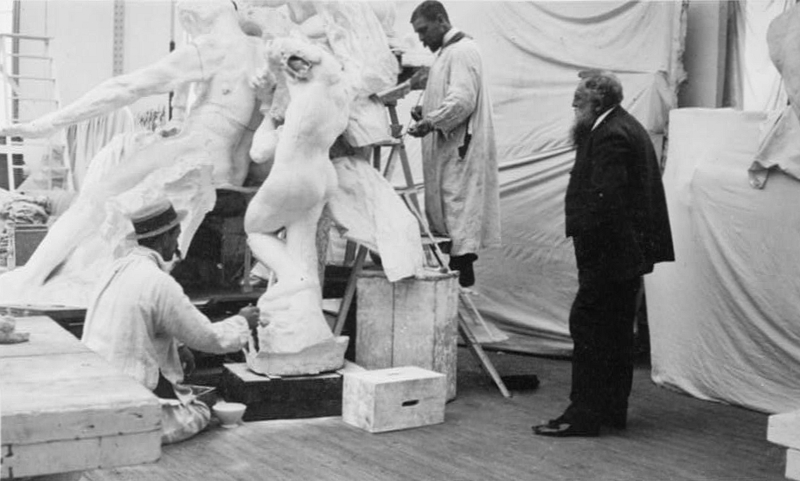 Whose Work Is It Really? On the Much-Maligned Role of the Artist's Assistant

The job of artist’s assistant has a confusing reputation in the press. Articles about the ongoing saga of Jasper Johns' civil suit against his longtime assistant James Meyer for the theft and sale of $3.4 million of his drawings is a prime example of the way the media talks about the relationship between artist and assistant. The horrifyingly giant and blatant theft aside, this recent Vulture article about the incident presents the power difference between an artist and his assistant as tauntingly acute and palpable. There is the usual implication that assistants are failed artists wanting a piece of the action, hoping their job with a star will get them there. But the bigger problem, made apparent in the mention of “silent armies of assistants,” is the stranger and harder to comprehend notion that the genius artist only wishes to be alone all the time, tirelessly creating without any external input or bother—and that the assistant’s job is to stealthily put everything in place.

This Daily Mail article about a job advert for Damien Hirst’s studio is another less subtle version of a negative portrayal, coupled with incredulity over the prices that Hirst’s work achieves. In reality, even in Hirst’s studio—the focus of many a horror story about painters with MFA debt painting nothing but dots for months at a time—this narrative is only a half truth. For every disgruntled ex-employee there are many more happily taking the paycheck. You are actually hard pressed to find an article about the topic of artist’s assistants that doesn’t feature Hirst, which probably says much more about Hirst than it does about assisting in general.

The flipside of the artist’s assistant job fantasy loved by the media is a romanticization of the relationship. The closeness between Lucian Freud and his assistant David Dawson is the wish fulfillment of this fantasy. Theirs was portrayed as a deeply and touchingly fulfilling relationship in which the assistant gave up most of his time and painting career in the service of his master and was eventually rewarded with a house in Kensington. 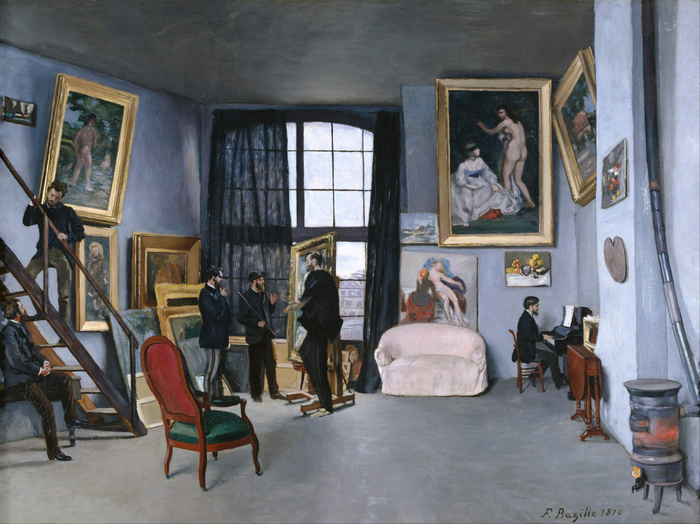 Frédéric Bazille, Bazille's Studio, 9 Rue de la Condamine, 1870, Oil on canvas; Musée d'Orsay, Paris; From left to right: Pierre Auguste Renoir sitting, Emile Zola (standing on the stairs), Eduard Manet and Claude Monet (with the hat) next to Bazille, talking about one of his paintings; Via Wikimedia Commons

Perhaps the continued return to these polarizing and overly reductionist ideas are simply a product of the role’s secrecy. Many large-scale studio operations make their employees sign confidentiality agreements, which only increases the idea to the outside world that the labor is somehow thankless or that all the employees are being screwed. The truth is always much more boring. Confidentiality protects future projects in their infancy. For megastars like Jeff Koons it’s probably also protecting his collectors’ investments. But on a smaller level nondisclosure contracts safeguard novel techniques and the content of upcoming exhibitions not yet made public. They'd be no different in a design firm.

These typical media portrayals are a million miles from the reality of the job, which is eloquently outlined in Graham Beck’s insightful 2008 article “A portrait of the Artists as a Young Assistant." Jasper Johns and Lucian Freud are reduced, albeit differently, to the myth of the artistic genius. Artists like Koons and Hirst are typically depicted as art factory CEOs with dollar signs for pupils. What’s most interesting is that at the heart of both of these ideas is a difficulty the public seems to have with the honesty and integrity of artistic endeavor. These stories aren’t about artists’ assistants; they’re about the artist as a figure the media would rather mythologize than learn anything about.

In reality, assisting can be a useful part of a learning process that can’t be taught entirely at art school. It isn’t for everyone. I have friends who work as PAs for artists, as manual fabricators, as CAD technicians, and even as engineers on large-scale studio projects, not to mention as preparators who stretch and prep canvases or make molds. None of us ever discuss the problem the media has with an artist signing a work they haven’t 100 percent made themselves, because that problem doesn’t exist for makers, buyers, or sellers of art, and it never has. Anthony Caro worked for Henry Moore; the Chapman Brothers worked for Gilbert and George; Marc Quinn was Barry Flanagan’s assistant; Ed Fornieles worked for Anish Kapoor; and many little or hardly known artists will continue to work for better known artists till time immemorial. The list will go on and on, and none of them will ever wonder about the status of the artist genius or question whose name appears on the work.

(Image at top: Rodin observing work on the monument to Victor Hugo at the studio of his assistant Henri Lebossé in 1896; Via Wikimedia Commons)

Posted by Phoebe Stubbs on 11/26/14
RELATED ARTICLES
COMMENTS (0)
ArtSlant has shutdown. The website is currently running in a view-only mode to allow archiving of the content.