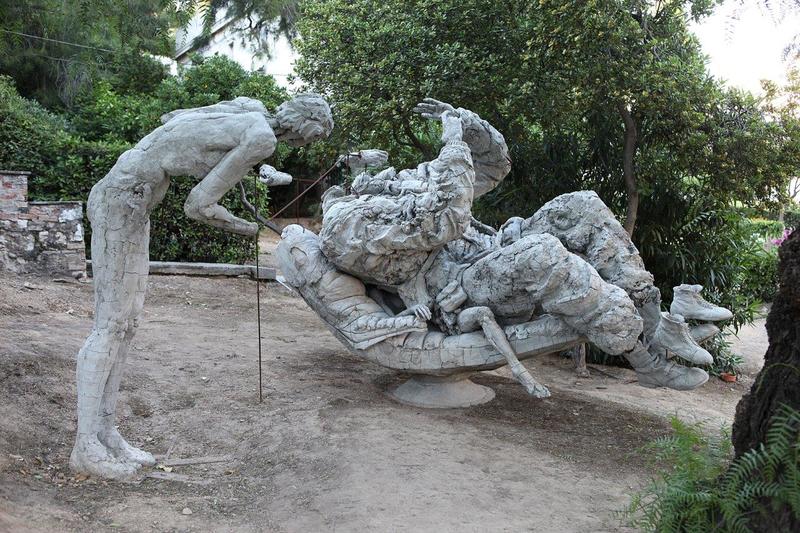 A Thousand Doors: A Journey into Knowledge and Language

On a beautiful, sunny, typically Greek day in early May, I walked up the steps to the Gennadius Library of The American School of Classical Studies, in the heart of Athens, looking forward to seeing a newly opened exhibition titled A Thousand Doors.

While I attempted to decipher its flow, a woman behind me, sensing my confusion, asked if I wanted to join in with her group since they were about to begin a tour. As luck would have it, this lady was in fact Elina Kountouri, the co-curator of the exhibition and the director of NEON, an organization founded in 2013 to revitalize public space through art.

Kountouri, along with Iwona Blazwick from the Whitechapel Gallery in London, in their first collaboration in Greece, have pulled together a fascinating selection of site-specific art. The works, created by over thirty artists of Greek and foreign origin, reflect the ideological foundations of Greek civilization and mythology upon which the Gennadius Library and its surrounding gardens were established. 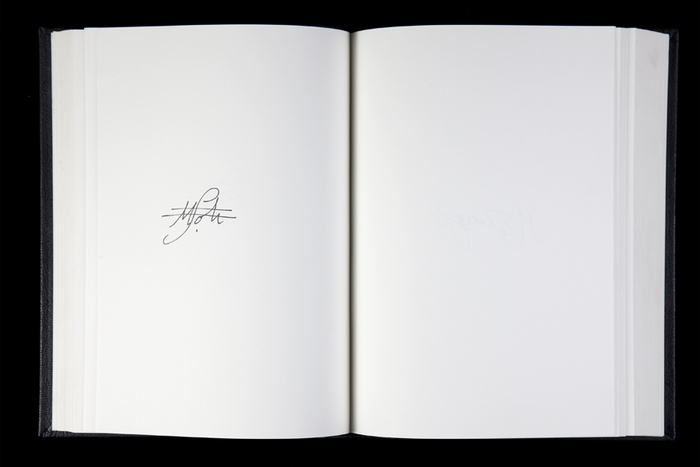 The Library, which was built in 1926 based around the collection of Joannes Gennadius and subsidized by the Carnegie Foundation, today houses over 120,000 volumes. It is a museum of sorts, with its rare bindings, works of art, and manuscripts. The founder was interested in books as artifacts as well as purveyors of information, history, and wisdom. This is exactly the point of A Thousand Doors: the books represent portals to knowledge, time travel, scientific and philosophical enquiry, and imaginative worlds.

The exhibition is loosely divided into three parts or, to my mind, "chapters.” Artists on view range from well established (Juan Muñoz, Jannis Kounellis, Matthew Barney) to fresh out of art school (Paky Vlassopoulou). Their works—though worlds and, sometimes, generations apart—are bound together in this exhibition, forming a very congruent, aesthetically pleasing whole, which I found rich in tonal contrast and deeply textured, despite mostly lacking in color.

The first chapter, set in the library, comprises artist books. One of the most intriguing among them was a work by Edward Allington, Ideal Standard Forms (1981), a commentary on books and their content. He physically sliced into and embedded calculus books with actual three-dimensional, geometrical figures (cones, spheres, etc.). Another striking example was A Book of Signatures (2009), by Shuruq Harb. The Palestinian artist invited over 250 men called Mohammed (one of the most common names in the Arab world) to sign their names in a leather-bound album in a creative attempt to fight for individuality and resist prejudice. 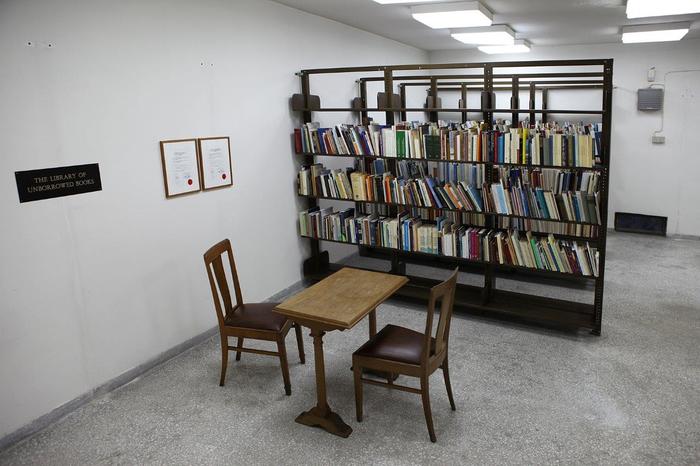 The narrative continues upstairs with a second chapter that discusses the disappearance, destruction, and retrieval of knowledge through site-specific installations. One fascinating video by Nina Fischer and Maroan el Sani, Toute la Mémoire du Monde (2006), is shot in the National Library of France, which was emptied of all its books upon completion of Mitterand’s library. Over thirty-seven minutes, the video shows a handful of adults sitting separately, with no source of distraction and no interaction. As the time goes by, they begin to get antsy. It is a very accurate and appropriate commentary on the lack of communication between people and its effect on shared memory/knowledge. Another work, an installation by Meriç Algün Ringborg, The Library of Unborrowed Books (2014) is a recreation of a library containing only those very lonely books from the Gennadius Library that nobody has ever borrowed or consulted. At this point, everyone on the tour, amused and intrigued, stopped to peruse these completely unused volumes, with titles such as The Origins of the Kiss or Balcanica, provoking a sudden, though fleeting, surge in their popularity.

We let the metaphorical dust settle and moved outwards, first towards the wings of the Library and then to the courtyards and the beautifully tended gardens. In this last chapter, a selection of public historical sculptures, three works made a lasting impression. The first was an untitled, site-specific work by Jannis Kounellis in which he has boarded up a window in an unused corridor leading to an auditorium with stacks of books. Only slivers of light shine through the cracks. The work forms a barrier to knowledge and suggests that books need to be opened and knowledge accessed in order to let in the light.

In an enormously touching large sculpture by Adrián Villar Rojas, titled Return of the World (2012) and made of clay, cement, wood and metal work, the artist takes a turn at storytelling. The story he tells is a complicated one, with multiple layers of figures (a soldier, an angel, a corpse) in odd, absurd positions. The plot is anything but obvious but the blend of mythology, history, and pure fantasy draws the viewer in emotionally and physically. I think the most moving part of this post-apocalyptic vision is that it is an extremely fragile work, a metaphor for the fleeting nature of history.

And finally, in a sprawling installation of sculptures by Daniel Silver, Dig (2013), which is everywhere really—inside the library, on the porch, in the garden—he has recreated what appear to be the remnants of an archeological survey. The action of digging is as much a physical action as a psychological one. It is closely tied to Freud, to his research into the sub-conscious and his physical working environment that included the famous couch, a Persian carpet, and shelves full of Cycladic multiples. Silver’s work explores the different steps towards the manufacture of fake “Cycladic multiples,” the archetypal notions of Cycladic art and, more generally, the passage of time.

As I wandered through the venue and gazed at these artworks, I felt the pull of centuries of knowledge and history that Athens has always exerted on artists and writers. I will be very curious to see what other projects NEON will undertake in the future in their noble endeavor to spread the contemporary art culture throughout Greece.