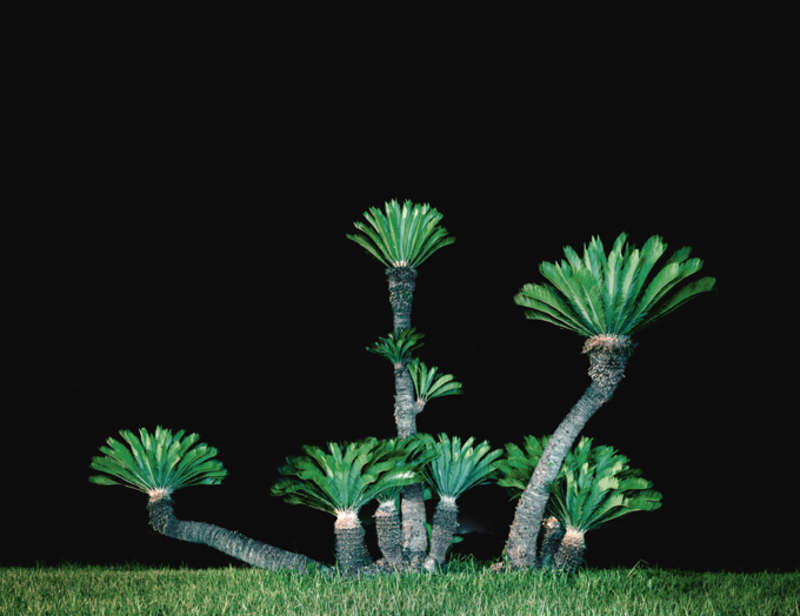 “Being a photographer, you become curious by profession. This curiosity is what inspires me and makes me enthusiastic about photography.”

In 2011, Juliane Eirich, a young German photographer, was accepted by Studio Kura’s Artist in Residence Program in Itoshima, a rural city in subtropical southern Japan. Her stay translated into fifty-one evocative and curious pictures. The timing of Eirich’s visit was key to her work; it was shortly after the Fukushima nuclear plant explosion. The photographer arrived in Japan with mixed emotions: a blend of fear and enthusiasm. For an entire month, she set off on her bike every day, exploring the area and taking pictures at various times of day and in all types of weather. 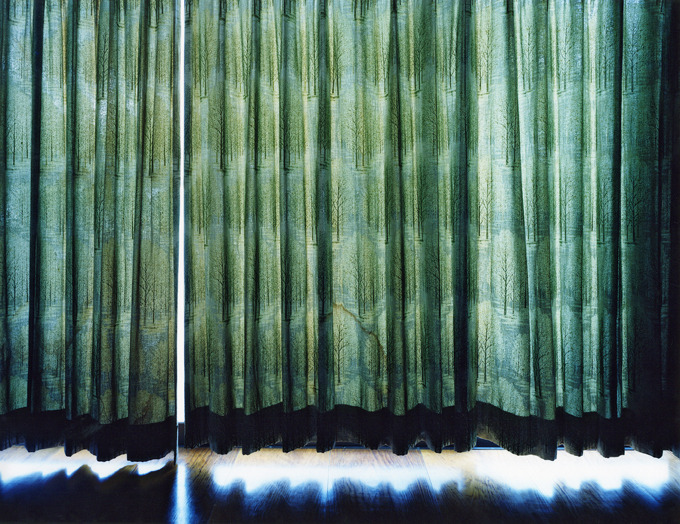 In a way, her inquisitive style falls somewhere between photo diary and photojournalism, with a heady hit of drama, à la Hitchcock. There is something mysterious about her photographs, a feeling of déjà vu in their staged quality, like a film backdrop. But as we see in Curtain (above), it is a fleeting, vague impression.

Even for Itoshima locals, her point of view is puzzling, clouded with her emotions. As Hirofumi Matsuzaki, the director and founder of the residence program, writes, Eirich’s “photographs may depict scenes that are too natural for us living here. I know this place. And this one, too. But the way she looks at things is totally different.” He concludes that “her fresh sensibility show[s] us new reasons to love Itoshima.”

Her photographs are expressive despite their quiet quality, and their straightforward compositions belie a true complexity of emotions. When choosing to view her works, we accept a wordless dare set forth by the artist: look but try not to get involved. Being impassive, however, is impossible. Her photographs both pull us in and reject us. They are raw and real, while being staged and carefully considered. Not much is left to chance, yet, to a certain degree, all depends on happy coincidence.

Take for instance Two Houses One Car (pictured below), a landscape with two buildings and a white van. It’s nighttime (as it often is in Eirich’s photographs, since “the uniqueness of certain places often only appears” then); the houses are dark within but starkly lit from the outside. One house is a traditional Japanese country home, a plain, small, white structure with large screen-like shutters. Next to it stands a narrow red building with one wall extending oddly above its roof. What is the purpose of such a construction? Our eyes wander back to the white house where we can just make out a faint glow coming from the depths of its courtyard. What is going on and why are we standing outside this house? We feel left out, uninvited. 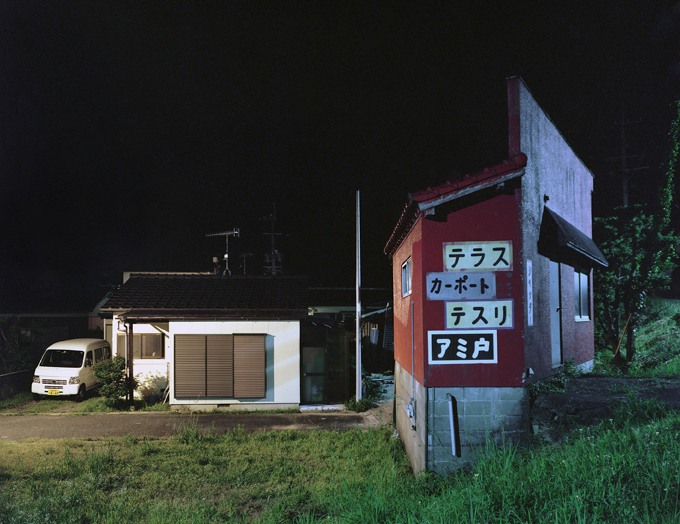 This picture is representative of Eirich’s work as a whole. Her photographs are works of contrast and a collection of impressions. Some were taken by day but the locations are as quiet and empty as if they were shot in the dead of night. Some have loud colors but are strangely silent. And others, like the ones depicting palm tree clusters, show how density and emptiness can coexist: the density of the vegetation—like an oasis in the middle of the desert—versus the emptiness of the lawn around it and the inky black backdrop.

There is a cool and calculating quality to her technique but she is never indifferent. Her photographs are reminiscent of Edward Hopper with a dramatic flair akin to that of Philip-Lorca diCorcia or Gregory Crewdson, minus the figures. In fact, her pictures are usually devoid of people but the existence of things—buildings, cars, power lines—reveals our presence. We live in symbiosis with what we make.

Born in Munich, Germany, in 1979, Juliane Eirich studied photography at the Academy of Photographic Design. After graduating, she moved to New York and Honolulu to pursue personal projects including the series Nowhere, Hawaiian Schools, and Nightwatch, all comprising haunting panoramas. In 2006, she returned home to Bavaria, where she shot her emotional Snownight series. During an eighteen month scholarship in South Korea, from 2007 to 2008, her photographs became more specific by focusing on ordinary things that were natural for South Koreans but foreign, and sometimes bizarre, for her. In 2010, she produced the series Tunis Polaroids, a series of abstract portraits. Juliane Eirich is a master at seizing the peculiarity and aesthetics of places that do not usually receive much attention. The contrasts that she brings to our attention along with the emotional complexity of her photographs are the reasons they are so compelling.

Her first book, Itoshima, has just been published with Peperoni Books, Berlin.