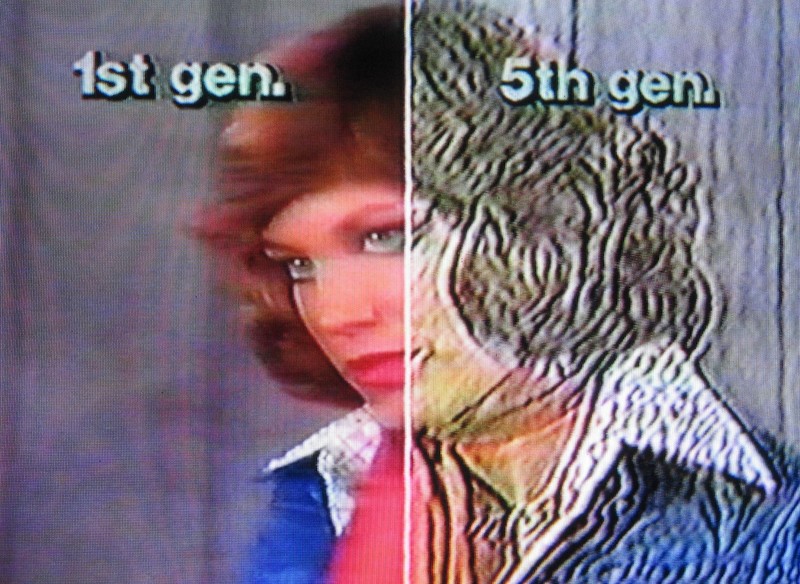 A sobering and potently nostalgic excursion

In Time Machines Mika Taanila’s fascination with scientific research and technology makes for a sobering and potently nostalgic excursion. This occurs by virtue of the fact that many of Taanila’s works involve the recycling of obsolete technology, popular music excerpts and even segments from some of his own films. For example, Stimulus Progression (2005), which celebrates Muzak, parallels the ramp that leads visitors to the exhibition’s main space. At first the rhythms and melodies emanating from its speakers insinuate a subdued, yet buoyant, feeling. But then, if we stop and listen, its presence becomes more intrusive. It feels increasingly lifeless, manufactured and unpleasant, and ultimately leaves us wondering how it ever served to manipulate people’s behavior.

Similarly, Verbranntes Land (2002) and Black and White Movies (2013), draw attention to another shadow from the past: the VHS tape. Whereas the former speaks of the gradual decay of recorded information (for Taanila, an uncomfortable analogy to the fading of memory caused by aging), the latter consists of a series of photograms of destroyed film video cassettes. Viewing these pictures makes us wonder if we should see them as worthless mass produced commercial items or cultural artifacts. Surprisingly, the images resulting from this process vary more than might be expected. One resembles an accumulation of confetti; others contain sumptuous abstract forms. It turns out Taanila linked his method of demolition directly to the films’ titles. Knowing that the cassettes may have been burned, run over by a car, smashed or sprayed with bullets also steeps them in black humor. 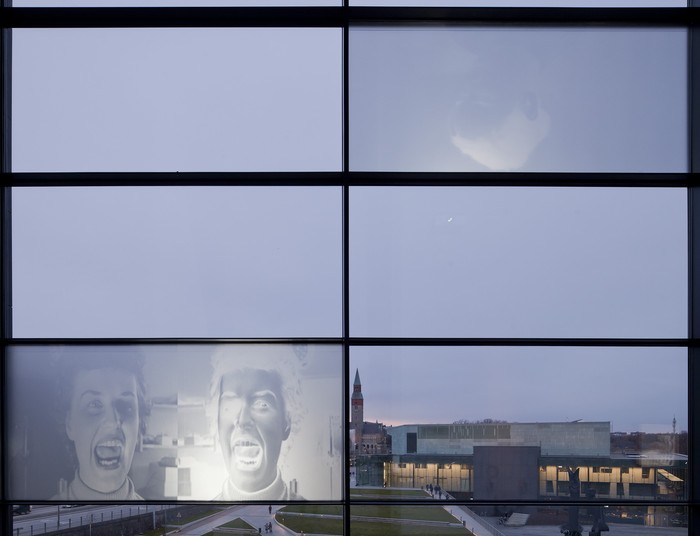 Nostalgia also pervades SSEENNSSEESS (2013), a work in which the doubling of the title’s letters mirrors the work’s dual character. During the day it functions as an audio installation; by night it becomes a film projection visible to those inside and outside the museum. Composed of film segments provided by Helsinki University’s Department of Phonetics and excerpts of the Shangri-las ‘Past, Present, Future’, the elements are looped to produce a constantly changing environment of images and sound, that in its own way intimates the mix of pattern and accident that comprise day-to-day existence.

As we navigate Time Machines, the exhibition makes us increasingly aware of the factors that influence, drive and distract us. This data builds gradually into an increasingly complex body of facts, ideas and impressions that reveals multiple affiliations. This can be witnessed in Twilight (2010), which in some ways reflects SSEENNSSEESS. It relies on scenes from a biological behavior study that reveals how a frog’s reaction time decreases with a lack of light. But here the images from two moving projectors eclipse each other at regular rather than random intervals. Then there is Six Day Run (2013), which also seems like an experiment. This work presents a glimpse of a runner intent on testing his physical limits on a round-the-clock race. It’s a case of mind over matter. He manages to finish despite the pain, exhaustion and lack of sleep. Finally, The Most Electrified Town in Finland (2012) contrasts placid views of the town Eurajoki and its environs with the monstrous scale of the nuclear reactor being built nearby. The projection engenders questions as to the plant’s necessity and potential risks. One pertinent scene that raises the issue of wastage shows a fully illuminated, but completely empty, highway interchange during a relatively bright summer morning or evening. Unfinished (2013), forms a companion to the video. This intricate and unassembled paper model of the plant (currently still under construction) logs in at a daunting thirty-seven-page length.

Coming away from Time Machines the mind feels overstuffed with disparate fragments of information regarding technology’s purposes and the many ways it impinges our lives. The relationship is an uneasy one for it operates on so many levels. It can, for example, be used to manipulate an individual’s behavior and wreak havoc with the environment on a massive scale. It can also expand our knowledge of the world around us and distort reality. We can laugh at its passé forms and still worry about its future effects. Taanila’s work doesn’t beat about the bush. It drives these points home.