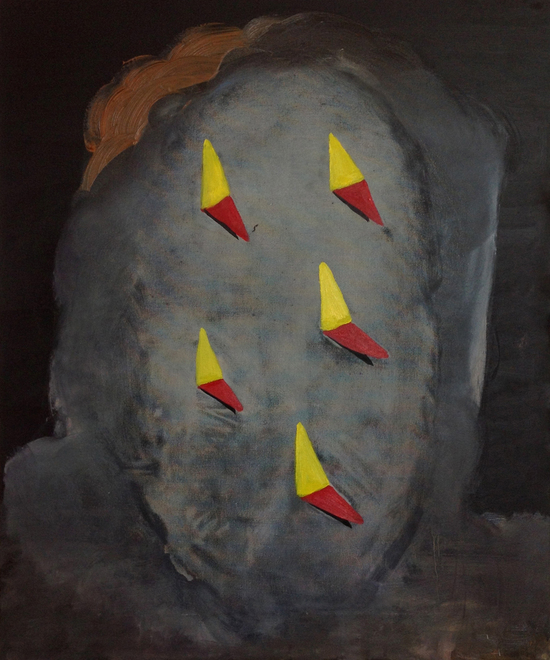 Alison Pilkington’s paintings are unique in that they provoke thought itself. Many works of art will get the viewer thinking, but most rely on subject matter or conceptual thematization to accomplish this. Her paintings however, unsettle the viewer through their imagery alone. This doesn’t come easy. The viewer has to want to really look, in order to question their own perception. So it is fitting that the artist, who is completing her PHD in art practice at the National College of Art and Design in Dublin, is exploring the topic of Freud’s notion of “the uncanny”; her paintings beckon us to reflect on the odd way perception itself makes us feel uneasy in our own familiar world.

Pilkington’s paintings are deceptively comical in that they are visual representations of a series of cognitive misunderstandings. At first, the figures in them appear at face value, where they can easily be perceived as caricatures: cartoony personifications of objects that can appear as toasters, mailboxes, ice cubes, nightlights, etc., but upon further reflection, the figures that make up the foreground quickly recede into the background as the picture plane reveals an odd figure/ground schema. This confusion amounts to a perceptual game of trying to see two things at once, a painterly metaphor reminiscent of the famous “faces-vase drawing” of psychologist Edgar Rubin or Wittgenstein’s “duckrabbit” – where, looked at one way the figure can be either a vase or set of two faces, or, a duck or a rabbit, but never both at the same time. We have to conceptualize them separately. This ambiguous splitting and conflation of visual thought is analogous to the idea of the uncanny, where something familiar can seem frighteningly alien to us as we try and navigate it and make sense of it. What Pilkington’s art reveals is how evident these illusions are to us in everyday life. 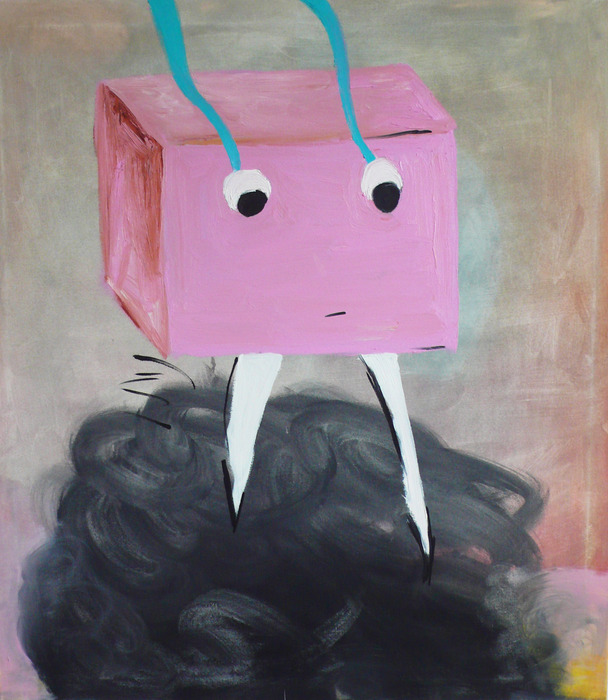 Every one of us has had the uncanny experience of staring at an ordinary object for so long that it loses its essence; a table for example, can become less table-like and more abstract over time, as can a word when repeated over and over in one’s head. At her studio, Pilkington told me of an experience that led to a series of paintings. The painting Precipice shows a pink, squarish character with large round eyes and two wiry looking appendages sprouting from them. The biomorphic form was derived from an experience Pilkington had while staring at a digital music amplifier in a friend’s studio. After a while, her thought process had transformed it into a face; if only for a fleeting moment, the inanimate object became almost human. But of course, it was not human, nor was it half-human. Its status could not be placed.

Seeing the face in the inanimate object, what had first been a design element of the electronic amplifier had become a smile on the painted canvas. Pilkington photographed the object, sketched it as she saw it, and called it “her.” This character, transformed over numerous iterations, is an example of what the artist calls “motifs,” figures that she takes and reinvents through the act of seeing and painting in repetition.

She describes her art as “cartoons,” a smart way of alluding to the playful subject matter while recalling the Renaissance era practice of using a “cartoon” or “cartone” to transfer the outline of a drawing onto a larger canvas in order to create a final painting. This is important because in many ways Pilkington’s work is an exercise of questioning what it is to replicate. Creating paintings in multiples, Pilkington makes replicas of her own work, repainting the same painting again and again, inevitably making small changes along the way. Each version that is removed from the original will either purposively or accidentally bring figurative changes with it. Just as the amplifier was not a face, so a rendition of an original painting is not its copy. “I’m a forger of my own work,” she told me. 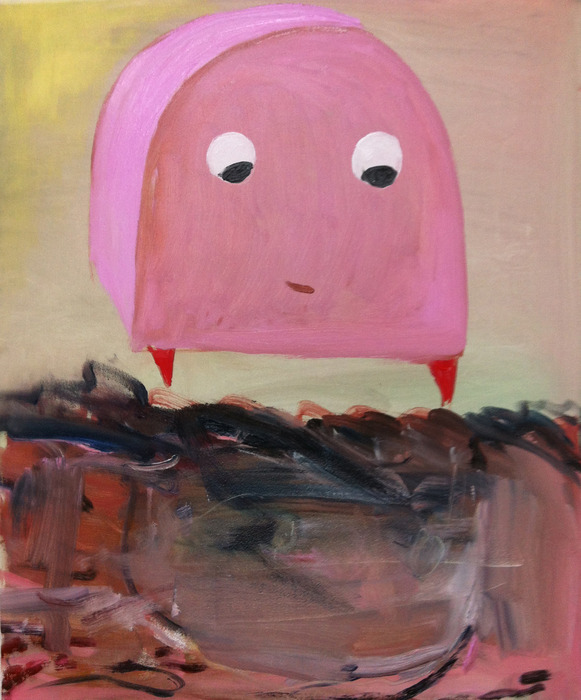 She suggests that the figures in her paintings, as well as the material of paint and the process of painting itself can be seen as a corollary of unconscious thought processes. In Daydream, blue rope-like lines of paint weave in and out of a bright pink, round face, allusions to the wily puppet strings of the unconscious mind. She describes her painting process as one that looks casual but takes a lot of time to get there; “I am trying to bring the material of paint and the strange imagery the motifs began from together.” Is this process – the attempt to bring the uncontrollable, malleable and unexplainable aspects of existence under our control – not the process we all hope to master in our own lives?

Posted by Peter Dobey on 11/11/13
RELATED ARTICLES
COMMENTS (2)
I now question my existence on ArtSlant... !
I now question my existence on ArtSlant if this is the rubbish that can win an exhibition, and an art award. Should the award now be called ArtCrap.... ! I call on all Destructionist world wide to Destroy this So-Called Art and the establishment that supports this rubbish... !
Comment by: Eadweard York on Sunday 11/17/13 at 2:51 AM
This is a JOKE.....! PURE CRAP.....!
This so-called painter should not have the audacity to exhibit this CRAP....! This is an insult to any artist with any real talent. Take this CRAP to the DUMP...
Comment by: Eadweard York on Saturday 11/16/13 at 6:18 PM
ArtSlant has shutdown. The website is currently running in a view-only mode to allow archiving of the content.