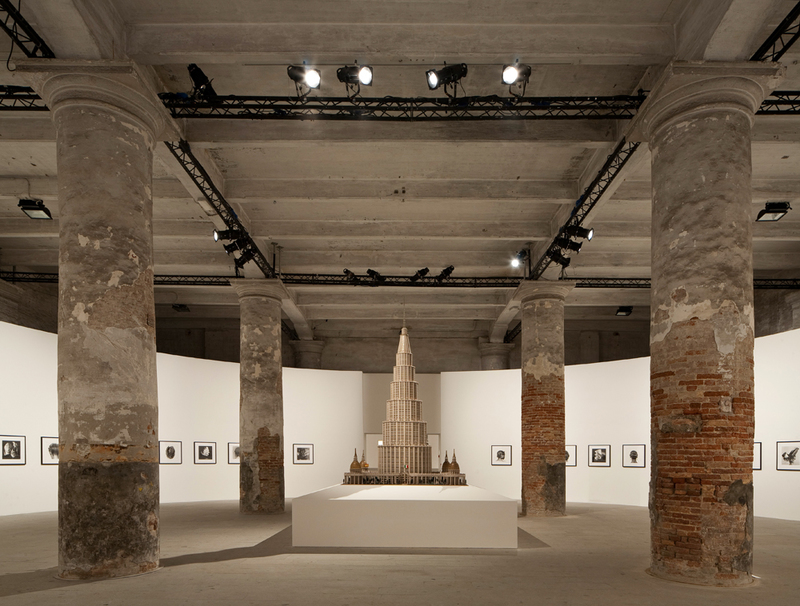 Notes on ‘The Encyclopedic Palace’. A Venetian tour through the Biennale

That day, the Yellow Emperor showed the poet his palace. They left behind, in long succession, the first terraces on the west which descend, like the steps of an almost measureless amphitheater, to a paradise or garden whose metal mirrors and intricate juniper hedges already prefigured the labyrinth. They lost themselves in it, gaily at first, as if condescending to play a game, but afterwards not without misgiving, for its straight avenues were subject to a curvature, ever so slight, but continuous (and secretly those avenues were circles).

Jorge Luis Borges, The Parable of The Palace

When Massimiliano Gioni chose the title for the 55th edition of the Venice Biennale, he clearly had in his mind, probably, the image of the Yellow Emperor’s mansion in The Parable of the Palace, a short story written by Jorge Luis Borges and published in 1960. It tells of an amazingly huge building, composed of circular terraces and vertical towers – a condensed cast of the world which encompasses courtyards, libraries, islands and shining rivers crossed by sandalwood canoes. It is a sad story; here, a poet is sentenced to death for having recited a single verse that contained the entire building, with all its richness and multiplicity. ‘You have robbed me of my palace!’, the Emperor shouts. That’s why he takes the poet’s life with the stroke of a sword.

‘The Encyclopedic Palace’ is a strong title for an exhibition. It refers to different layers of meaning: this is the name of the work by Marino Auriti, an ‘outsider’ Italian-American artist who built the model for an encyclopedic museum of everything (never realized); it is an allegory of the show, an ambitious attempt to collect an incomplete world encyclopedia through images and visual material; finally, it alludes to the aforementioned Borges narrative – a refined reflection on the human desire to grasp the whole of reality through literature.

The exhibition curated by Gioni unfolds into the spaces of the Giardini’s Central Pavilion and the Venice Arsenale. Both the venues display at the entrance two highly iconic works: respectively, the illustrations from the Red Book by Carl Gustav Jung and Auriti’s Encyclopedic Palace of the World. Like two poles of a magnet, these two ‘artworks’ attract each other, though pointing to diverse (but conciliable) horizons: on the one end the labyrinth of the encyclopedic knowledge; on the other the persistency of man’s effort to reach an invisible, supernatural reality – material versus immaterial, science versus esotericism, real versus dream. But there’s a file rouge that ties together these opposites: a sense of frustration, desperation, recklessness and folly. The rooms of the palazzo are imbued with a constant, well discernible feeling of affliction – this is a show about mankind and his limits, about the pain and sorrow induced by the impossibility of a complete understanding of the world.

During my Venetian stay to see the Biennale – a stirring, seducing stopover like every journey to Venice – I could ponder a long time (this particular state of mind stimulated by the surreal topography of the town) on this vast exhibition, on its strength and inspiring force. And I could find some parallels between the show and the city, as if the first directly grew from the Venetian lagoon basin (with all due respect to the curator, who evidently has been able to lead this semi-natural birth). I would summarize those considerations in four notes. 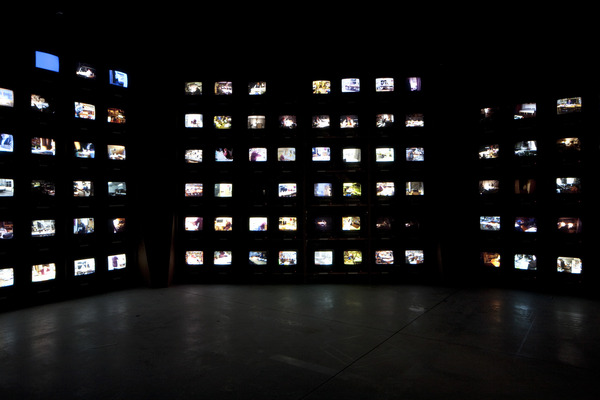 You can call failure the sensation you feel at the end of a blind alley in Venice. Where you expect to meet another street or a jumper, you just find a crusty wall – or, more often, the green water-flux of a canal. It is frustrating, this feeling you have when you get lost in the maze of little squares and narrow streets. It is the same sense of impotence spreading from the works displayed in ‘The Encyclopedic Palace’ – and coming along with the confused visitor, especially in the incoherent labyrinth of the Central Pavilion. Impressing is the installation by the Brazilian ex coast guard Arthur Bispo do Rosário, another outsider like Auriti (this issue, that of the ‘amateur’ artist, is particularly dear to Massimiliano Gioni, who conceived of the Biennale as a ‘temporary museum’ showing artworks by practitioners and non-professional artists, together with a variety of non-artistic objects and artifacts). The work consists of hand-made tapestries bearing poems and navigation lists, ready-made items and manufactured objects – a striking and delirious compendium of the world poignantly assembled by the artist after a divine apparition. In a few words, a tragic attempt – crossed by despair and destined to failure – to sum up human knowledge.

Turmoil is subtle in the beautiful video by Camille Henrot (winner of the Silver Lion), while it becomes evident in Bruce Nauman’s video-installation (the rotating head of the artist) and is brought to insane levels in Maria Lassnig’s paintings, one of which portrays the artist with a gun pointing at the temple. This ‘bankrupt attitude’ also hits one of the last works at the Arsenale, Solo Szenen by Dieter Roth: an enormous video-diary composed by hundreds of screens recording every detail of the artist’s daily life. It stands like a monument of the failed effort to create a total and truthful self-portrait. 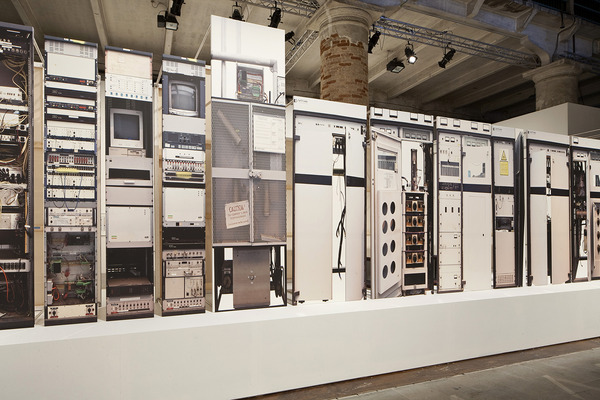 We all know how Venice, especially by night, could inspire romantic abandon and nostalgic 'way backs'. Just consider this: it is a city without highways and traffic jams; the major roads are made of water; and after midnight silence covers the entire lagoon expanse. You can’t help but forgive the traveler for a measured dose of melancholy and a pinch of nostalgia (while looking at the Ca’ d’Oro’s trembling lights from the Pescaria dock, for instance...). Nostalgia, predictably, seems to be the watchword of the 55th Biennale. I am referring to the great quantity of clay and pottery in the show (the lunar ceramics by Ron Nagle, the clay small sculptures by Fischli & Weiss); I also allude, specifically, to the primordial-ancestral-atavistic impulse which inspires many works on display (among others, the spiritual gravitas of Hans Josephsohn’s rough sculptures, the meteorite residue by Phyllida Barlow as well as Roberto Cuoghi’s  giant megalithic stone). Also, the exhibition presents a lot of drawings and paintings – a sort of ‘nostalgic’ return to the traditional media of art. There is more. Among the videos exhibited, many have been shot on 16 or 35 mm film – what is more ‘nostalgic’ than reverting to analogue footage (a trend that interests much of contemporary art during the last few years)? That is the case for the video works by Tacita Dean, Melvin Moti, Gusmão and Paiva, together with Simon Denny’s bulky installation at the Arsenale – a critique of technological innovation’s schizophrenia. 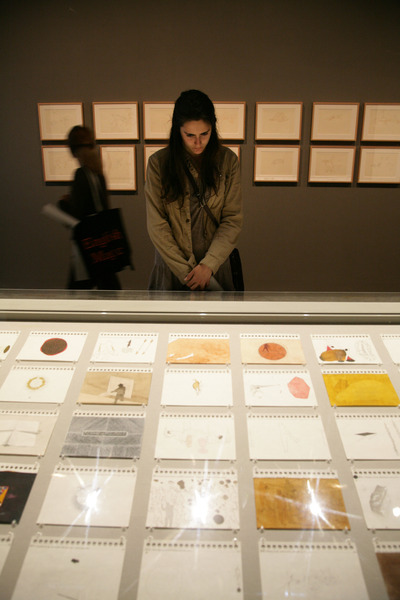 When Marcel Proust, in his Recherche, describes the mansions along the banks of the Grand Canal, he states that they ‘made one think of objects of nature, but of a nature which seemed to have created its works with a human imagination’[1]. Great is the fascination that Venice exerts over writers in every age. The town constitutes the background for loads of novels and short stories (first of all Death in Venice by Thomas Mann); also, the maze of Venetian calli and campi recalls the labyrinth of the Babel Library depicted by Borges in one of his narratives. ‘The Encyclopedic Palace’ seems to welcome this strong connection between Venice and literature paying homage to fiction and book culture – can we consider that as an expression of the nostalgic approach discussed above (in a sense, indeed, we could associate the celebration of the book-object to the analogical revival in contemporary art, both signs of the same final attachment to a disappearing world)? Inside the Central Pavilion, for example, I could admire the series of drawings by Christiana Soulou inspired by Borges’ Book of Imaginary Beings; in the same room I bumped into Gianfranco Baruchello’s Grande Biblioteca, a stunning assemblage of six boxes containing a miniature paper library of the whole of human knowledge. Also, the exhibition displays the Scrapbooks series by Shinro Ohtake – a collection of more than sixty New Dada sculptural books – and Carl Andre’s Passport, a surprising hundred-page personal encyclopedia in the shape of an album. To complete the list, I must mention the drawings of Franz Kafka’s diaries by José Antonio Suárez Londono, the last tribute to literature pervaded by a lively and obsessive imagination. 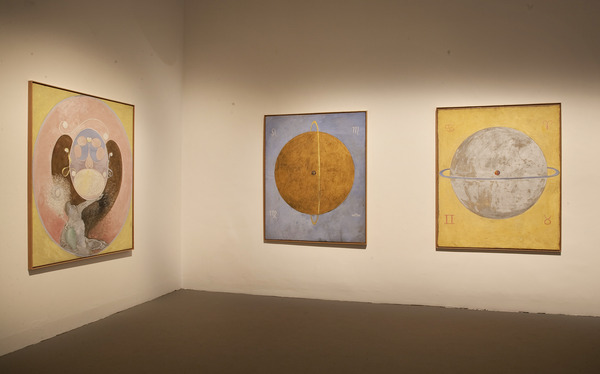 In my mind I vividly hold a picture by the Italian photographer Gianni Berengo Gardin. It shows a flock of birds crossing the sky of Venice chaotically, with a ghostly San Marco square covered by water in the background. Venice is the perfect setting for a Surrealistic photo-shoot or a Situationist dérive; it is indissolubly connected to the dream, the irrational and the unconscious. Gioni’s exhibition, of course, takes this into account. ‘The Encyclopedic Palace’ all focuses on dreamy impulses, creative imagination, non-rational thinking. The disposition itself of the works – in particular inside the Central Pavilion – doesn’t follow a lucid or logical order: it’s a matter of free and evocative associations. We can grasp that just looking at the hypnotized face of André Breton, carved into the chalk by René Iché; or inspecting the twisted phallic sculptures by Sarah Lucas, worn out remains from inhibited dreams. As if driven by a Freudian pleasure principle, the show unveils man’s most hidden and primitive drives – and, above all, his greatest fears. So the route leads us to invisible forces and meta-physical reigns – esotericism, indeed, is a key theme in the exhibition (just think about the spectral presences of Paweł Althamer, the fluorescent light-talismans in Neïl Beloufa’s video, the abstract spiritual paintings by Hilma af Klint and Emma Kunz).

Once more, it is a romantic, nostalgic and imaginative show. But what is the strength of this Biennale? What makes it compelling and actual, even if it displays a lot of works by dead or mature artists? Its anthropocentric vision, I suppose, which is able to stage a sort of Copernican Revolution of contemporary art curating – a turn which puts humankind (with their desires, worries and failures) at the centre of the universe. Who is its artifex? Massimiliano Gioni, naturally. And the city of Venice, in a way.