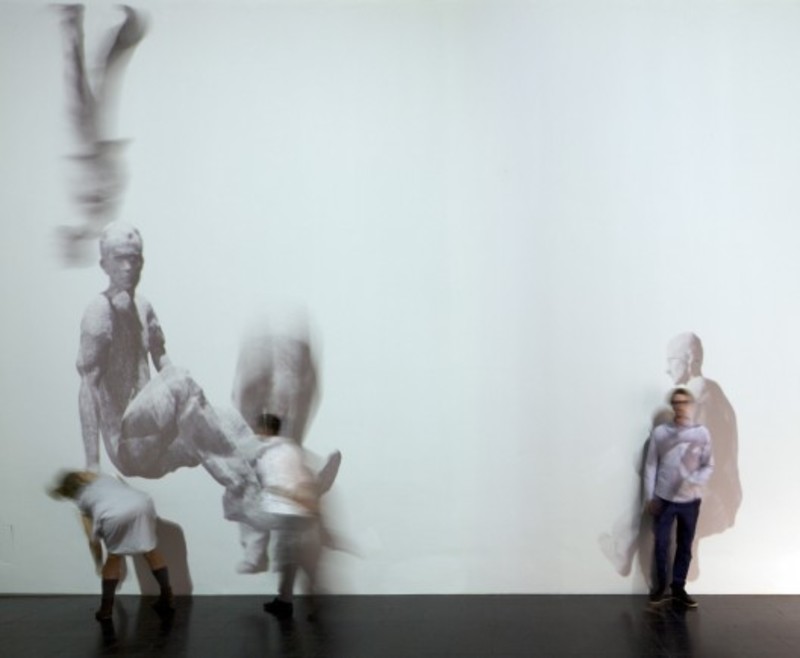 “We’re not like artists”: What the Venice Architecture Biennale says about art

Director David Chipperfield stands at the whitewashed entranceway to the Arsenale on the opening day of his Common Ground biennale, pink-faced among a swarm of onlookers. He’s exclaiming in front of a videocamera: “We’re not like artists! The primary material of architects is our buildings – we can’t hang buildings on the wall.”

Maybe they don’t go on the wall, but where do the buildings go at the Architecture Biennale? It’s a question that no one, least of all Chipperfield, seems able to answer. Though architects have found ways to present their work to the public for centuries, large-scale exhibitions have proliferated only in the last fifty or sixty years – the practice as such is relatively young. In contrast to the 117-year-old Venice Biennale, the Architecture Biennale, which opened in 1980, has a lot less of its own history to contend with. Instead it has the complicated task of staging an explicitly non-art show in the very same context designed for its long-established counterpart.

The exhibition of contemporary art is rarely burdened with pedagogical self-explanation, least of all self-justification. Art’s creation is integral with its exhibition: it’s generally made to be shown. Press releases and catalogues do the explanatory heavy lifting – the architecture exhibition, on the other hand, is necessarily self-explanatory. However speculative or experiential, at the very least it’s supposed to explain what it has to do with architecture. Though it’s easy in a city like Berlin to forget what a “conventional exhibition” of either art or architecture means, the specific set of conditions and expectations that both art and architecture are operating under (and resisting) are immediately brought into focus when high-budget shows in each field are compared – say, in consecutive yearly visits to the Art and Architecture Biennales.

A regular art-gallery-goer in Venice at the 2012 Architecture Biennale might be struck by the existence of two drastically different exhibition approaches. One kind is designed to convey information. The content of the exhibition is not necessarily inherent to the objects themselves: exhibition materials are mediums. One such exhibition that tells a complex story through brilliant design this year is Herzog & de Meuron’s: the duo’s presentation of their unfinished Hamburg concert hall, the Elbphilharmonie, is exhibited both through beautiful models and blown-up press clippings that chronicle the contentious debate surrounding the building’s construction. This exhibition explains, but it’s a beautifully designed explanatory concept, and it doesn’t shirk real-life complexity for narrative arc.

The primary concern of the biennale’s second exhibition formula isn’t to inform or educate; it’s designed as a singular and self-contained experience. Like many of these presentations, the extremely successful Polish Pavilion was created by an artist. Katarzyna Krakowiak built resonant spaces below a false floor and walls in the pavilion, and strategically situated speakers to recycle sounds from elsewhere in the room. In conjunction with ventilation shafts in the roof, the circulating sound becomes a metaphor for spatial memory, experienced through the residual vibrations of those who have traced the same steps before.

One realization for an art viewer in an architecture world: the pavilions you like aren’t necessarily the ones the architects like, and vice versa. My personal pick for Biennale Best was Austria’s bizarre and isolated pavilion, precisely because it refuses to explain itself. The exhibition, Hands Have No Tears to Flow, portrays the banal architectures of our daily lives through negative space. Floating figures are projected through mirrored screens – typing rapidly at invisible keyboards, swiveling on imaginary office chairs, lying down on absent beds. I thought this was the funniest, most fun, and most mystifying piece in the Giardini; to the architects I talked to, it seemed irrelevant. 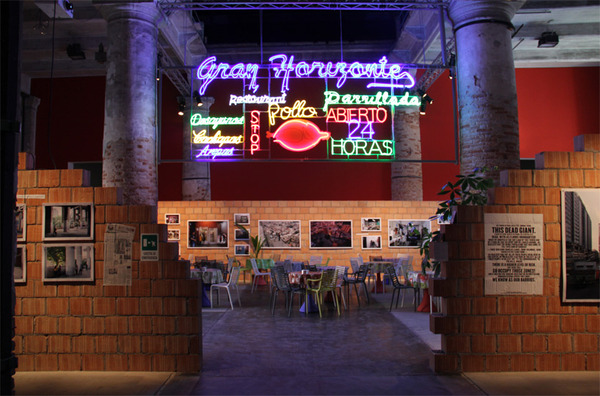 The last realization: certain successful exhibitions in the architecture context would possibly be embarrassing in the art one. This year’s Golden Lion Winners, Urban-Think Tank, were awarded for their project Torre David/Gran Horizonte, a film and photo documentary chronicling a forty-five-story vertical slum in Caracas. The exhibition is installed in the Arsenale within an “informal restaurant” where (Venetian) workers dole out arepas and cervejas to visitors who want to “eat, drink, and generally taste South America.” Visitors arriving at the restaurant after trudging past scale models and dry displays for one whole leg of the Arsenale felt exactly the way they are supposed to: excited and engaged with the subject material. I am fairly sure, however, that a Venezuelan restaurant facsimile would have been much less exciting at the glittery Art Biennale. Furthermore, serving food would read as a retro-gimmick, an outdated subversion of the white-cube, or an empty political gesture (which it may be in any context).

Each of these realizations doubles back on itself – assumptions about what art should and shouldn’t explain begin to break down when the architect’s perspective is adopted. And of course the line between art and architecture, at least in exhibition form, breaks down. Perhaps this is what the Architecture Biennale does best: permeates and dismantles its supposed parallel field. In these twin worlds, the glaring differences are all the stranger for how close they are supposed to be. Space doesn’t provide context: audience does.

At the Guggenheim, Artists Enlist Architecture to Subvert and Expand Histories
8/11/16

Wednesday Web Artist of the Week: Sabrina Ratté
6/29/16
COMMENTS (0)
ArtSlant has shutdown. The website is currently running in a view-only mode to allow archiving of the content.