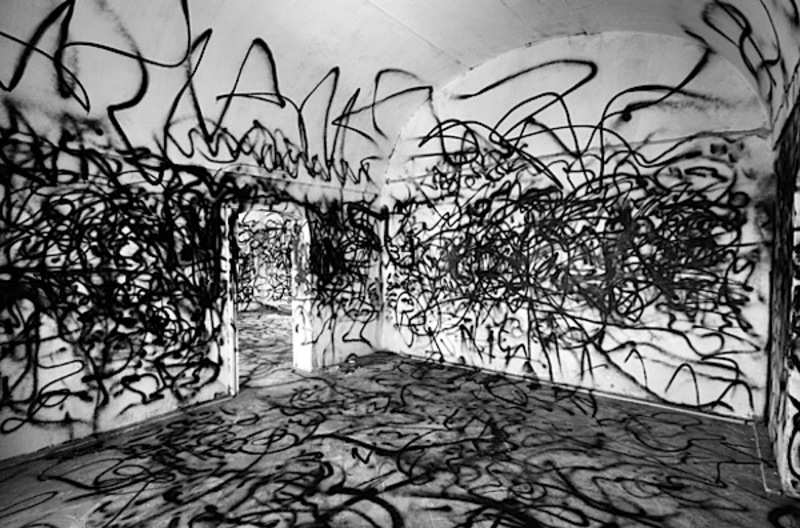 Jeffrey Deitch’s bold claim, that graffiti is “arguably the most influential art movement since Pop,” was meant to rile people up. The provocative statement was found in the exhibition catalogue to the ambitious Art in the Streets exhibit at the Museum of Contemporary Art, Los Angeles, in 2011. Graffiti and street art have been shown in museums and galleries before, but Art in the Streets was the very first attempt at a historical retrospective and survey of this wide-ranging, ill-defined art movement.

LA Times critic Christopher Knight, in his review of Art in the Streets, countered Deitch's claim, writing that “the deepest impact on art culture has come from Conceptual art, not graffiti.”

I do not disagree with Knight on this point. Art driven by conceptual concerns, in the widest possible sense, has certainly dominated the discourse of contemporary art for the last forty years.

Yet I also agree with Deitch. It depends on what context of art-making and presentation you’re considering and how you define “influence.” The impact of conceptualism was deeply felt in the art world—in “art culture” as Knight puts it—in museums, in academia, and other institutions. But we must remember how very, very small this art world is, comparatively speaking.

These things are quite difficult to judge, but I’m willing to bet there are more young artists in their formative years right now running around with markers and spray paint than there are making a go of it in MFA programs. And as far as the portion of the populace affected by art: graffiti and street art, though not universally well-liked (but what art is?), goes directly to the public at large, with no middle man, no red tape, no bureaucracy.

As Deitch points out, graffiti and street art “leapfrogged over the critical machinery of the art establishment to become one of the most popular manifestations of contemporary art.” It did this by word of mouth and by popular culture: books, magazines, movies, and the internet, grabbing the spotlight without grants, fellowships, MFAs, recommendations, connections, collectors, galleries, critics, or curators. In forty-odd years, whole generations of young people have found their way to art through graffiti, through street art, skateboarding, and the various visual cultures that accompany them. These are new generations of make-art-now-ask-questions-later artists, curators, art dealers, collectors, and writers. They’ve made their own art world: disseminating art by their own means, in self-published books and magazines, in their own gallery spaces, on blogs, and on the street. So naturally the established art world—which had no hand in this development—doesn’t acknowledge, or can’t accurately judge, the extent of the impact this influx of visual art has had on art culture. Or it refuses to expand its definition of art (despite how often it claims that it does) to include design, illustration, fashion, and other forms of less “pure” art forms.

I don’t wish to suggest that conceptual-based and street-based practices are totally at-odds—in fact there’s quite a lot of overlap if you’re looking for it (for instance Daniel Buren, Jenny Holzer, NUG). But the fact remains that graffiti is largely unburdened by theory, at least in the intent of most of its makers. One can attach theory (Graffiti as Performative/Political Gesture, Graffiti and the Negation of the Commodified Art Object: toward the Aesthetics of the Ephemeral, Graffiti as Anti-Spectacle and the Détournement of Public Space, and so on…) after the fact. But the truth is, the intentions and reasons, the concept, behind most street artists’ and graffiti writers’ practices makes scholars and critics uneasy: most practitioners cite that it’s simply something fun to do; it’s a rush of adrenaline; they love to draw and paint and want to make the streets look more interesting. Art in the street is unapologetically decorative, consumed with style, fiercely DIY, ideologically messy, and very difficult to define.

Yet despite the fact that it appears to exist outside of art and outside of commerce, the ease and pragmatism with which street artists also create work for sale in galleries or for commercial contexts makes these same critics (and many other hard-liner artists and writers) positively queasy, with an all-too familiar anxiousness. But when photographs of Allan Kaprow’s happenings or Lee Lozano’s notes on conceptual works are shown or sold in galleries, no one raises much of a fuss anymore. Will that eventually be the case for street art? At least these artists are benefitting from work created knowingly and expressly for sale, rather than seeing their public works removed from the walls to be sold in secondary markets (though that could become an issue…). Despite the grumblings, the truth is that graffiti writers have sold canvas works in galleries since the early 1970s—this is hardly a new development. And with Doyle’s gearing up for the first US auction of street art-inspired works, it seems the market is only expanding. Detractors and supporters alike will inevitably demand that graffiti and street art remain on the street, "where they belong," but doesn't that just serve to marginalize those artists who have other aspirations?

It’s easy for the art world to dismiss graffiti and street art, along with the other painting, drawing, and illustration that share their aesthetic affinities, as “vernacular,” “folk”, “lowbrow,” or “mass art,” but in so doing, they reiterate the tale-as-old-as-time cultural division between “high” and “low.” The raging debate over MOCA’s leadership and the defection of its artist-trustees, though full of legitimate concerns and questions, ultimately seems like a gut reaction—a fear, even—about letting the “riff raff” in, compromising the seriousness of our institutions of art.

Huffington Post art pundit and founder of the Coagula Journal, Mat Gleason posited that MoCA’s Art in the Street “[puts] all of those academic artists on notice, saying you're no longer welcome, you're no longer wanted. Your art world is over.” It’s not likely that this art world is really coming to and end—but it may end up becoming a bit more democratic and pluralistic. For all its faults (and it had many), Art in the Streets offered a glimpse of the possibility that a serious institution could engage with a young controversial form of art, as well as constituted a positive step for graffiti and street art in opening up much-needed room for critical discourse and inquiry. All of its shortcomings and omissions are simply opportunities for further discussion.

With this inaugural edition of ArtSlant Street, we propose to continue this conversation.

Christopher Tavares Silva Answers 5 Questions
12/4/17
COMMENTS (2)
Hello Martyn-- thank you for your response-- a great point you're making about this shift in generations. I think it is really interesting that the birth of the graffiti movement coincided with so many other cultural changes and upheavals. Chris Knight brings up a good point though-- that perhaps it's because of conceptualism that people started to view graffiti as art to begin with... Anyways, hope I can make it out to the NuArt festival some time! The street art festival is an amazing model for encouraging appreciation for the art and revitalizing cities---wish there were more like it in the US!
Comment by: Natalie Hegert on Sunday 07/29/12 at 7:48 PM
The tide is high
Terrific article and hopefully the first of many that deal with this topic. Everyone from Ginsberg and The Beats, to Warhol and the pop art movement have been castigated as worthless, drop out, vandals etc etc.. It's trotted out everytime a new young vibrant movement relevant to its time appears. And of course, usually by artists and administrators of previous generations who made it to positions of power. Deitch should be commended. As for conceptual art, maybe it's no accident that Art and Language's "The Journal of conceptual art" was produced several years after Cornbread and co introduced graffiti to the walls of Philly and NYC. Martyn Reed www.nuartfestival.no
Comment by: Nuart on Sunday 07/29/12 at 4:17 PM
ArtSlant has shutdown. The website is currently running in a view-only mode to allow archiving of the content.