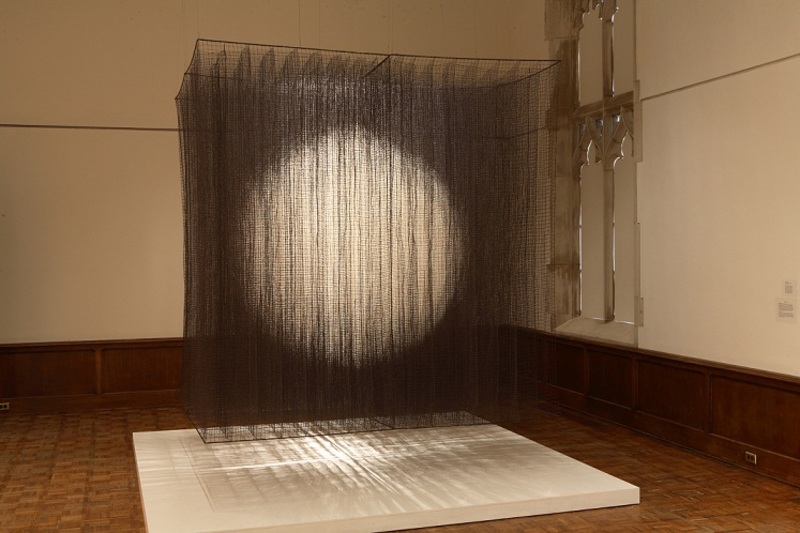 I dreamed about columns. As if pulled from the sea, solid pillars seemed to hover, a totem from some fantastic marshy planet.

It had been a week since I’d wandered through Craft Spoken Here, curated by Elisabeth Agro at the Philadelphia Museum of Art, and Howard Ben Tré’s columnular Structure 23, 1984, was not the only work to haunt me; many works in the museum begged to be touched, handled, felt. Craft like this, made by hands, begs for hands.

In the museum, I was glowering on the floor, who-knows-why-just-sensually-aching to rock my head inside the top emptiness of John McQueen’s improbably sewn, gourd-hive-sarcophagus laid out on a low plinth there.

Bennett Bean’s Pair on Base, 1998, has a top that wears acrylic color, glaze like elegant garment, rich blue, rich red, gold. The top is ornate, lush curlicues, squares filled with rectangles. In the museum, the rectangles looked to me like so many candies. But, looking down, almost at the underside of the form, I thought this sculpture suggested a figure that had been through serious something, through some unspeakable trauma. I thought I could read blooms of scars and red-brown skin bumpiness. On its bottom, it bears burns. 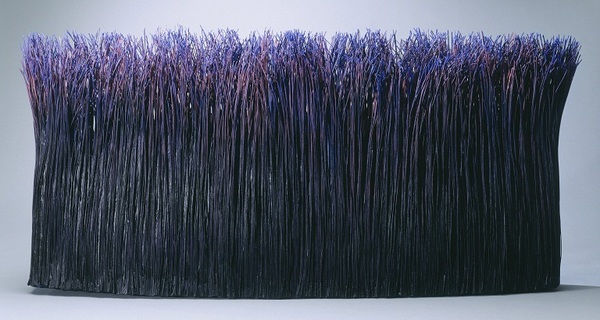 I want to run my hand along the tips of the spikey paper reed field that is Mary Merkel-Hess’ Blue Reed, 1997. It looks like the tips of a giant paint brush left out but somehow still luminous, not dried-out, still all set for a grand personal calligraphic, cartographic paint-loaded gesture. This sculpture is hair-happy pointy hair. It slightly divides space: everything on my side looking-on is separated from everything behind that I cannot see, that the sculpture does not allow me to see. Merkel-Hess’ creation appears to shield something—an animal dreaming perhaps.

In spite of many evocative objects, Craft Spoken Here is a disappointing exhibition. Spotty histories of artists are relegated to short labels. There is no catalog; there are no on-line resources. This exhibition treats objects superficially; it misses the opportunity to teach us more about the context of these important craft works.

I don’t want to pick on the curator or the institution but I want to say something about craft and ideas, programs and histories, knowledge beyond the sensual. Perhaps it’s a failure of funding, but here, as elsewhere, it feels more like a failure of imagination.

By creating themed rooms, the curator of Craft Spoken Here suggests that the inter-relation of objects exhibited has to do with the dynamics of composition and similar formal sensibilities. The objects are divided and grouped under one of three banners: “Essential Element,” or “Shape-Shifting,” or “Gesture.” I do pick up synergies between the objects, visual rhymes—spirals, spikes, surface tensions, cavernousness.

But, I’m suspicious. Just because objects have some visual similarity or each is made mostly by hands, I don’t think that necessarily means the objects have anything really to do with each other. In this case, the objects are culled from different cultures, different continents, and different decades. Without significant explanation, I’m not sure the kind of cultural and historical leveling on display does anybody any good.

I think—without getting too dizzy—in Craft Spoken Here, I could find reference to Chinese Sung Dynasty ceramics, to Cubist sculpture, to Ancient Egyptian columns, to Noh Theater, to Post-Minimalism, Action Painting, Native American jewelry and baskets.

I'm all for inclusivity, but how could we better, less superficially group, categorize, and inter-relate these kinds of objects? How do they stand up next to their influences? Where exactly were these works made? ... and for whom? Work made by what kind of worker? ... from what school of thought, or out of what arguments, in what free time having worked at what other jobs, having studied at which Universities and exhibited at which galleries, over what state boundaries, between which back yards, over what fences and over what meals? 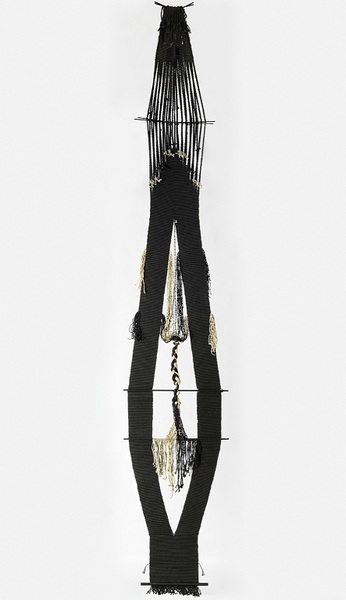 I want to feel like I’m there, with the artist, with something up my sleeve, or like an artist, at the pottery wheel perhaps, maybe humbled by the weight of the clay, lopping the clay, fast-responding to weight, to material, rooted in many influences, worried, inspired, up-all-night if necessary sorting out contradictions between hard-held influences.

Great vision could focus the exhibition of diverse activity with diverse materials: bamboo bent and crochet, sculptural weaving and turned wood, knotted nets and bowl-ish constructions. I think the road to clarity involves relating—within the exhibition itself—a wide and varied discussion about the thinking behind objects and substantial mappings of artists’ inspirations. Through the exhibition, bring me to the thoughts and histories, the contentions that lie beyond the surface, share real scholarship, bring me to meaningful conversation between objects by bringing me to evidence of illuminating and authentic conversations between artists, curators, patrons, and critics.