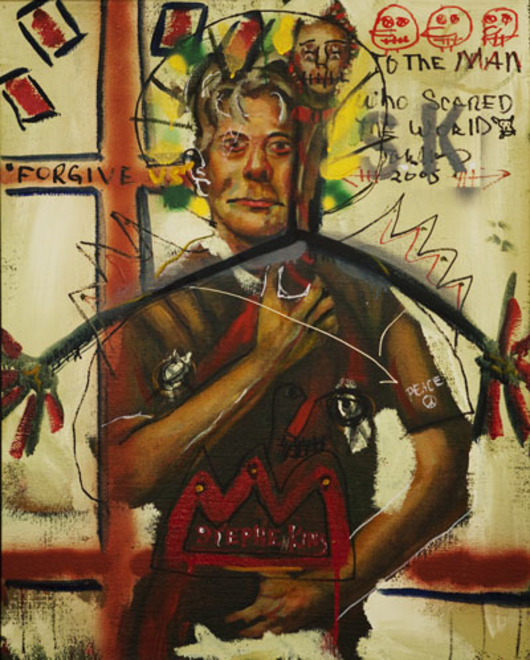 Skeletons In Our Shared Closet

John Mellencamp doesn’t see himself as an activist, which I suspect is his humility speaking. There is no escaping the fact that Mellencamp is a political artist. And I say this with the utmost respect as his views are heartfelt, witnessed first-hand and lifelong. With work ranging from the alarming Strange Fruit (2006), which points to past, horrific atrocities, to the straightforward Coast to Coast (2005) that reveals the continuing problems and degradation more and more are facing across our once great nation, we see the thoughts and concerns of a passionate creator. And like one of his greatest influences, Max Beckmann, Mellencamp paints powerful, impassioned, difficult and haunting imagery that will find its way deep into the mind of the viewer as it picks and prods memories, moods and impressions most would like to overlook.

In Mellencamp’s art, we often see many references to a country weakened by the messages and methods used for self-serving political gains. We come face to face with expressions that are ripe with both the personal and the universally historic, and we are witness to a life lived without fear of reprisal in making these observations clear. Mellencamp has no expectations of ‘across the board’ art world acceptance, or even limited success. He prefers not to blend into an art world that stands for less, or reeks of fashionable intentions. His art is made on its own terms, and, despite his obvious understanding of color and composition (and of what I call rhythm and what he calls math) Mellencamp maintains a truth that is undeterred, unique and stripped of any established views he deems to be weak or misplaced. 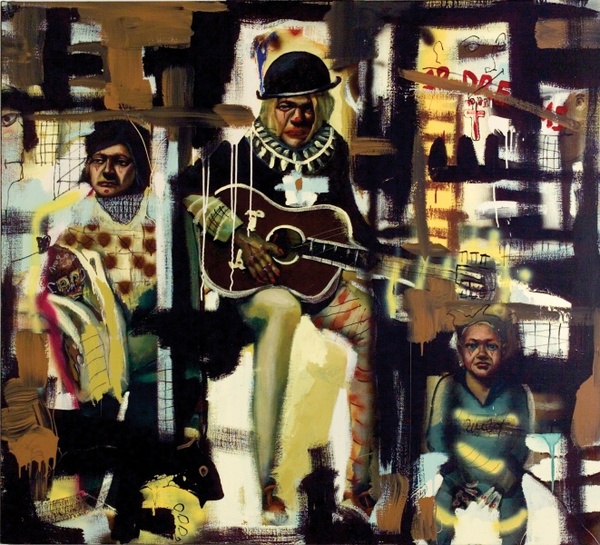 There are other important art references in Mellencamp’s paintings. Looking at Twelve Dreams (2005), I was reminded of Picasso’s Three Musicians (1921). In both paintings we see compositions controlled by poetic placements of brown, black and white. The often overlooked dog in Picasso’s Three Musicians dissolves even further into the background in Mellencamp’s ‘version’ which is seen here as a simple suggestion of a dog's eye and ear on a brown patch of paint just above a quickly rendered paw. And as Picasso often did, Mellencamp depicts himself as the harlequin in Twelve Dreams suggested by the face paint and partially checkered left pant leg. Where they differ is their intention. Picasso was pushing the possibilities of Synthetic Cubism with works like Three Musicians, as he masterfully utilized flat planes of color to indicate movement, form and space. In Mellencamp’s Twelve Dreams, we feel the weighty souls of his subjects lost in thought and stilted by circumstance. Here, the mood is darkened and made more contemporary with the use of drippy spray paint and multiple painting styles.

Two pivotal works, Fear in America (2005) and Skeletons (2005), anchor the show at the Tennessee State Museum with multiple timelines and buoyant narratives. With Fear in America we see Mellencamp’s innate ability to tackle difficult color schemes by varying their visual weight and placement. Here, accents, text, texture and time flows like wind through the ruin and decay of a long abandoned home. In Skeletons, Mellencamp manages a somewhat earthy palette of Indian red, greens, browns, blues and black to command our gaze. With this work, we see what can be termed as a memorial to lives lost in conflict, whether it be a result of an ‘official’ war or a declared hatred. And as a metaphor for the skeletons in our shared closet, Mellencamp raises important issues that continue to fester, and eat the center of our collective soul.

Most of Mellencamp’s mixed media works are comprised of multiple paintings. Even photographs he’s taken are sometimes used, i.e., in Coast to Coast (2005), where a map of the United States of America is broken down into natural and man-made calamities. Upon close inspection of this, and many other works, you will see the reuse of smaller canvases that were removed from their stretchers and adhered to the larger canvas surfaces. These obvious edges, folds and tape used to make the attachments might intimidate the average artist bent on seamless or secretive technique. In Mellencamp’s art, these ‘imperfections’ become statements on two fronts. For one, I see a reference to the American farmer, laborer or factory worker who toils in patched clothes with barely usable equipment. I also see a reference to our infrastructure comprised of the faltering physical, political and moral elements, and how it’s all repaired with temporary solutions that garner the most immediate profitability.

One interesting note for all you artists out there who made paintings some time in the middle of the last century: Mellencamp’s preferred painting surface is jute. He occasionally finds old rolls of it buried beneath or behind more popular materials in a dusty corner of an art supplier’s stock room. Jute has a wonderful texture, something like thick burlap -- and when used to its fullest potential, as with the paintings of Mellencamp, it yields wonderfully tactile effects.

If you're in Nashville on or before June 10th be sure to stop by the Tennessee State Museum.