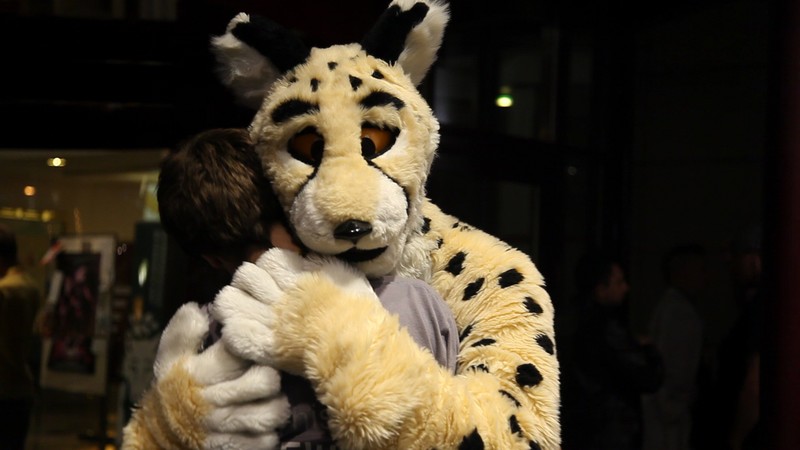 Annika Larsson's fourth exhibition at a gallery located in what Stockholm refers to as their “art palace” in Vasastan, ANIMAL is a curious display focusing on the rapport between the human and animal from multiple angles: anthropological, psychological, theoretical, political—to name a few. More specifically, this show focuses on the philosophical concept of the human as yet another evolving species in flux and becoming.

Stories between and among the animal and human (ranging from real to synthetic to mythological) are numerous, from the proverbial folktale Little Red Riding Hood by Charles Perrault from 1697, to Homer's epic poems The Iliad and The Odyssey from around the 8th century BCE (e.g. the Big, Bad Wolf and the Trojan Horse). Based on traditional stories like these, we interpret and represent the energies of specific animals.
Larsson's exhibition focuses on “power” animals such as the wolf, bear, panda and kangaroo—all of which possess their own spiritual underpinnings and intriguing narratives. For instance, the kangaroo's animal spirit is known for its balance, focus and intuition. A gallery wall is painted black; the following text Untitled, all works 2012, allows entrance into this creature's world:

Your feet are now longer, covered in orange fur and have three toes, the middle one being far longer than the outer two. A look around to your back and you'll see a large lower body with a thick tail attached to it. You're still somewhat bipedal but when hopping you know you'll be in a stance that's almost quadrupedal. You've become a kangaroo. The idea is absurd yet here you are standing in what may or may not be the outback wearing nothing but fur! 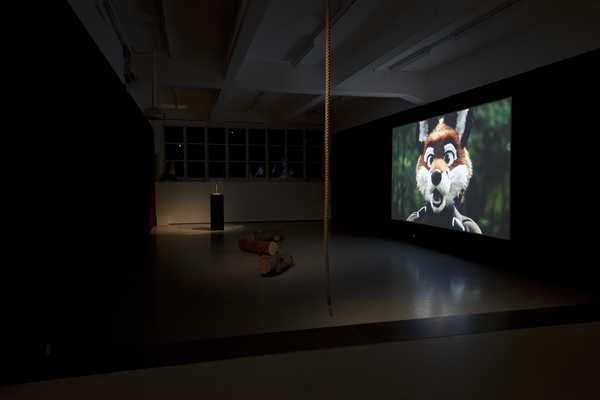 Installation shot of Annika Larsson's ANIMAL at Andréhn-Schiptjenko. Courtesy the artist and gallery.
Additional works in the exhibition include: black-&-white drawings; notes and collage works composing A Musical Score for Animal; two tiny videos approximately one minute in length titled A Hole – Wolf & Panda which can be viewed from within a wooden peephole box (missed entirely by those who lack initiative to see what exists inside); a sculptural object of burnt clay depicting a slender creature between human and animal—standing upright, protected in a glass box—titled Löwenmensch. The centerpiece is a forty-one-minute long video loop ANIMAL (in 14 Movements) which mesmerizes with synthesized scenes of plushy animals (i.e. “fursuiters” as the press release calls them or "furries" as innumerable fairly creepy fanboy/porn sites describes them) interacting with humans in a psychedelic zone where the two harmoniously coexist.

Eerie fursuiters dance, hug and play with humans who graciously accept their presence. The documentary is addictive; one is invited to live vicariously through their anonymity. These creatures do not appear consequentially tied to their actions in the same way humans are, yet there are scenes where fursuiters express human-like traits: empathy and a benevolent connection with those both similar and different. The fourteen movements could be interpreted as steps towards a state of losing or forgetting one's self, desiring an undefined state of change—if nothing else. For better or worse, resorting to the animal within is nothing new.

Rage, rage against the dying of the light.

—Jacquelyn Davis
Posted by Jacquelyn Davis on 2/7/12
RELATED ARTICLES
COMMENTS (0)
ArtSlant has shutdown. The website is currently running in a view-only mode to allow archiving of the content.