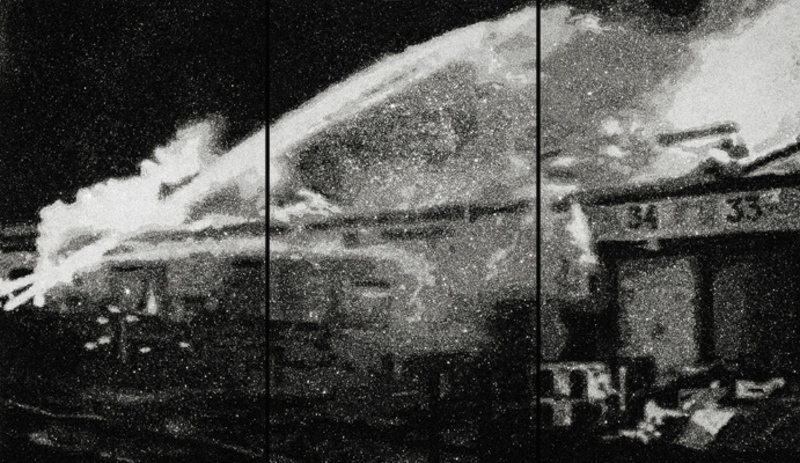 Finnish artist Liisa Lounila (b. 1976) produces art ranging from oil paintings to moving images to textual explorations to sculpture. Further, she uses glitter to create large-scale images (solo, triptychs, series of multiples) which are primarily black and white with shades of grey—with one exception being Vandal, 2003, which incorporates red. There is a recurring glitz, glamour and bling aesthetic in her recent works (e.g. Two Sugars Would Be Great, 2011 and Stargazing, 2011). The first displays two standard coffee cups (and stir sticks) shining in a consumerist ensemble like svelte gemstones from Tiffany & Co.; the latter: a worn pair of classic Converse sneakers coated thickly in silver, protected by a transparent glass case. In addition, her light sculptures The End and Sorry Luv, 2009 are metallic and possess embedded miniature lights resembling LED's emphasizing a narcissistic undercurrent due to the presence of mirrors and lights resembling those used to accentuate a private boudoir.

One image to return to again and again is The Everlasting, 2005, which is a glittery triptych displaying an unidentifiable building which appears to be in flames and is being extinguished by high powered water. What purpose did this building once serve before it became threatened and began to burn? Who entered and exited it—and why? The building appears similar in construction to the proverbial diner in Edward Hopper's painting Nighthawks, 1942, in that it appears to originate from the same mid-twentieth century period which produced long, low structures which were cost-effective and a response to living in Midwestern or Southern regions of the United States, where space was not a pressing concern.

The building is either being destroyed or being saved, and one could ask: what is so special about this building being destroyed (or rescued) as opposed to another? The answer is more often than not: nothing. It is not this building which serves to be of interest but the transformation between life and death: of an entity, position or idea. Like watching any liquid turn to gas and spread into the air, the answer more often than not lies in the ethereal. Many find it satisfying on an unspoken level to watch something outside of one's self die or desist, especially if the death of the obsolete leads to the birth of something else which is perceivably improved—even new—for the spectator.

Posted by Jacquelyn Davis on 1/10/12
Tags: text sculpture video-art
RELATED ARTICLES
COMMENTS (0)
ArtSlant has shutdown. The website is currently running in a view-only mode to allow archiving of the content.