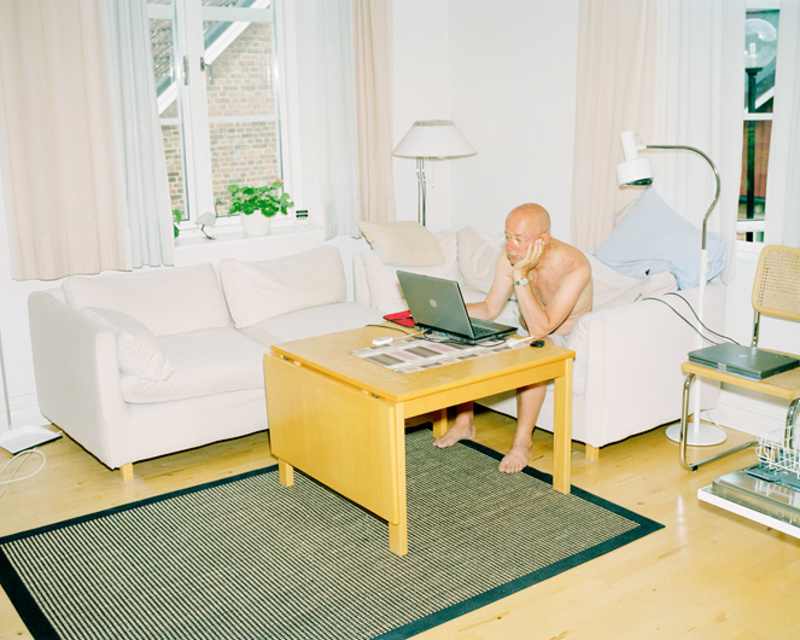 Swedish artist and photographer Jesper Ulvelius, born 1984, presents a series of photographs titled Red where the viewer sees a balding, bespectacled middle-aged man, presumably Swedish, situated in rooms which appear to be either living rooms or patios or fenced off backyards in connection to the man's presumed apartment. This man is alone in each photograph, often partaking in a meal alone or a leisurely activity such as surfing the internet, reading the daily paper (The Expressen which is the Swedish equivalent of a more relaxed tabloid in competition with Aftonbladet) or watching cable television. He never looks at the camera (and in turn: the viewer), instead he’s always preoccupied with his personal thoughts or diversion of choice. Perhaps, this man does not live alone; there are hints in certain photographs of the subtle presence of another: a second laptop, a second blue glass, another TV tray with half-eaten remnants. But where has he or she gone—and why? Is this documented abandonment temporary or otherwise?

Each image is clean—much like the rooms and spaces that this solitary figure finds himself in, which can be seen by others who are not Swedish to assist in reinforcing the stereotype of The Swedish Way: leaving all shoes at the door, minimalist furniture, little-to-no kitsch, devoid of excessive clutter, polite punctuality. Is this sequence intended to portray any assumed vapidity in the Swedish mentality, or are these scenes more so meant to remind how much almost everyone's life, despite nationality, consists of these less profound, even ordinary moments which are usually hidden from public view? For those who live in Sweden and are familiar with the obvious interior decoration options of IKEA or Mio, this apartment could be almost any middle-class person's apartment, which is simultaneously comforting and bizarre. Watching this contemplative man is much like watching yourself shuffling about in your own private sphere from a bird's eye perspective. 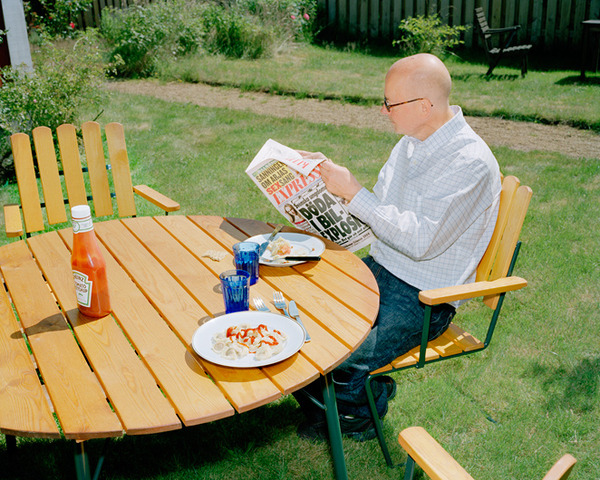 Other works by Ulvelius complement this series to a degree; they portray intimate corners of  interior private spaces and overlooked suburban landscapes, illustrate lone individuals in the midst of mundane entertainment options, highlight the slightly-before or just-barely-after of significant moments which are never clearly relayed. They either focus on the singular, the absence of another or the absence of everyone else all together. With other images such as in the diptych Tear Sheet which shows a virginal bedspread of white or a blindingly bright television screen propped alone in the corner of an otherwise pitch-black room, one gets an impression that what is left behind or what never was is just as intriguing as the fulfilled.

All images: Jesper Ulvelius from the series Red. Courtesy the artist.