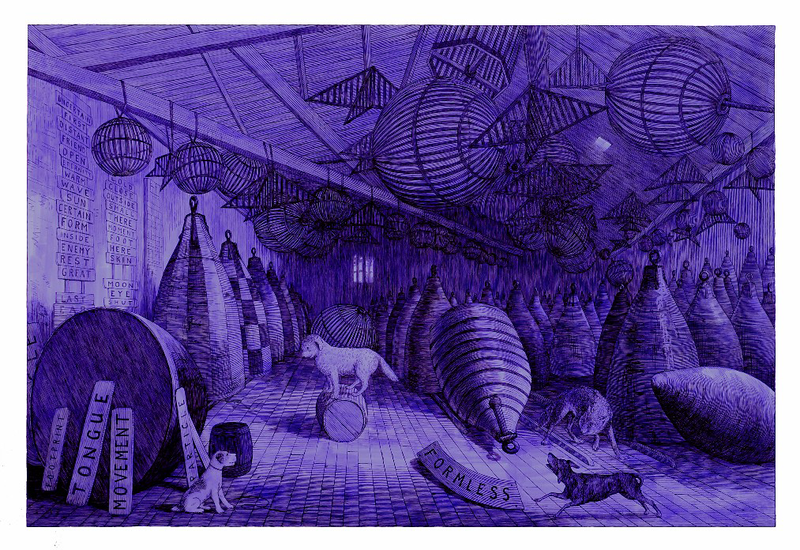 by Jacquelyn Davis
Swedish artist Martin Jacobson creates a voluptuous scene illustrating that the fanciful can be more attractive than reality. The temptation to escape, to leave home to join any circus, to create a parallel universe, to be a tireless, invincible creature in a carnival of tricks, diversions and illusions—this could be the essence of what it means to live. Unbridled imagery intoxicates those with a keen eye for nuance. Allegorical Dogs, 2009, is littered with one-word signs of observation and declarative parts of speech whilst a pack of energetic dogs frolic among each other, dancing an exclusive bolero, in a darkened room of fascination. The scene is as much a timeless dreamscape as one can hope for; it harbors geometric cones and jagged devices which have no distinct purpose. These dogs seem domesticated, yet they explore the space as if they are wolves in an uncharted forest or cave. Many crave to be in situations that don't have a determined beginning, middle or end -- the thrill of being in a moment which doesn't feel obligated to answer questions when one inquires.

A pack (a species-specific term) is a hierarchy of alpha, beta and omegas that feed off of each other, where one adopts the lead by mastering a series of tests that place one figure above the others because of observed abilities — or at least a sly talent for convincing. It is based on trust and maintained through intense loyalty. Yet the construct is inherently unstable, for one's role as leader is insecure, consistently under siege in innumerable ways. The pack has become an oversimplified metaphor and explicator for prevailing societal realities, such as competition gone awry, the nuclear family and current state of affairs (e.g. the ironic problematics of democratic models that only exist in theory). Robert A. Dahl remarks in Dilemmas of Pluralist Democracy:

To hold that a plurality of important and relatively autonomous organizations exists in democratic countries does not imply that their existence creates a serious problem. If the consequences of organizational pluralism were entirely advantageous, there would be no problem; if, though disadvantages existed, they were miniscule in comparison with the advantages, the problem would not be serious; while if independent organizations could easily be eliminated without doing harm, the problem could easily be solved. The problem of democratic pluralism is serious, however, precisely because independent organizations are highly desirable and at the same time their independence allows them to do harm (31).

When viewing this pack of dogs amidst an isolated space of geometric factors and jigsaw pieces, one cannot help but make connections between the pack and society-at-large. Between these dogs and the "narrow" personality traits in which humans continually negotiate with: fearlessness, curiosity, sociability, aggressiveness, ad nauseum — all worthy of future investigation. A still life or off-kilter “moveable feast” of forthcoming play, the line between stasis and activity is not precisely fixed.

In other works by Jacobson, the artist shares a range of historical influences: fictional, mythological and biblical figures such as Pinocchio, Hansel and Gretel, Orpheus, Pan and Satan, animal auras, as well as strategic games, experiments and dynamic phenomena such as role-playing, charades, executions, stoning, alluring traps and sirens. Traditional political texts such as Thomas Hobbes' Leviathan, which concerns itself with social contracts and liberal interpretations of the law when one assumes that society is organized by a legitimate sovereign, are also amidst Jacobson's inspirations. Allegorical Dogs is bathed in royal blue and violet -- colors linked to the stately physiques that the artist illustrates in other large-scale works that are aesthetic reminders of uncanny works such as Las Meninas, 1656 (Diego Velázquez). The deviant in Allegorical Dogs reminds those discouraged by dangerous patterns of mediocrity that imaginative, less confining alternatives demand attention.

Posted by Jacquelyn Davis on 8/23/11
RELATED ARTICLES
COMMENTS (0)
ArtSlant has shutdown. The website is currently running in a view-only mode to allow archiving of the content.