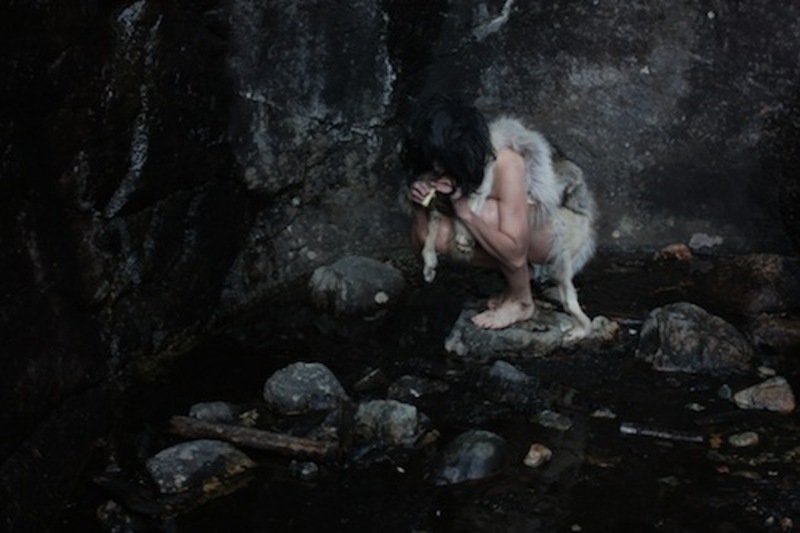 by Jacquelyn Davis
Taking a train to Gävle, walking in the streets and parks of a city known for its public art and sculptural initiatives, this group show co-curated by Joakim Forsgren, Carl Bergström and Maja-Lena Johansson displayed works of the more established Viktor Rosdahl alongside those of the less-known Petr Davydtchenko and the collaborative duo Kjersti Vetterstad and Monica Winther as the Daughters of Valhalla. Upon entering the preliminary space, two over-sized winter coats lined with animal fur hang next to a chained accessory screaming the word MAYHEM welded from metal. One first encounters Davydtchenko's work alone, consisting of two videos, one photograph and two sculptural floor pieces that remind one of the visceral underpinnings aligning these artists. What is either a barn or a country house is in flames; one sees its vulnerable frame relentlessly disintegrating in the dark in Exploring the Fire, 2010.

In a smaller video Run Paint Run, Run, 2010, the background wall is splattered with black paint like some haphazard street art, identical to the paint which Davydtchenko pours on his pale chest in the video before walking barefoot over hardened snow and awkwardly, almost painfully, dragging the same MAYHEM sign one initially encounters. The sign's mechanical chain contrasts Davydtchenko's youthful flesh and arm-length black leather gloves; the camera is unstable, shaking and sounds of clanging metal ring. The Christ-like crucifixion reference is apparent; the artist's act dismantles conventional spirituality, turning the quest inward towards the lone individual — in this case: the artist. On the floor exist two sculptures near one another — one made of now rotting, once writhing tree limbs fused together with leather strips; the other, wooden blocks pieced together with protruding, rusted nails. Both introduce the division between restraint and violence. In The Hanged Man, 2010, two wires elevate the artist's image sequestered near a sepulcher during a cold, dark season. The artist's mouth is open, head hanging limp — one may associate Davydtchenko with a fatalistic martyr of sacrificial entity. “Your body is the church where Nature asks to be reverenced,” once declared Marquis de Sade. 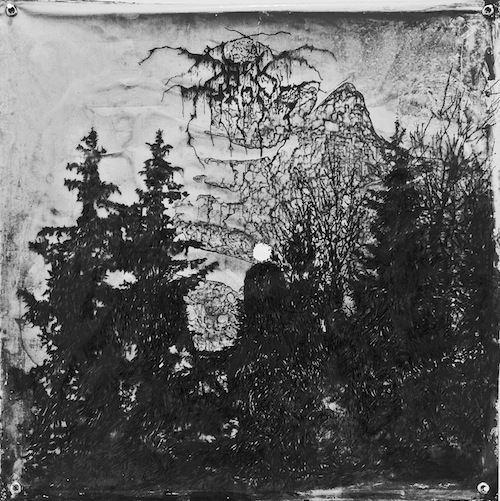 Entering the largest room, Rosdahl's aura overwhelms as one moves from framed pieces such as Brothers Gonna Work it Out, 2010, and The Need to See you Dead (R.I.P. Jussi Hirvilammi), 2008. The latter is panoramic and elongated; a flock of geese flies overhead as embedded, ghostlike heads pulsate from the mysterious terrain where monstrous factory smoke eats through the air towards the viewer alongside an untouchable Russian palace in the background. One could spend hours cataloguing Rosdahl's minutiae. Smaller works such as Dark Throne, 2010, thrive on found plastic-as-canvas pulled taut; tall trees are backlit by a plump, full moon, and a bleeding mountain is visible. Rosdahl's works are in motion, possessed by swirling tornado-like fountains, and men and women work in unison cranking difficult mechanisms out of context yet combining energies.

In Giants of Yore, 2010, the Daughters of Valhalla slowly push their way through an expansive winter snow acting out a prophecy inspired by “Völuspá,” a.k.a. a significant Norse poem in the collection Eddan. These pale-faced, black-eyed giants ravage meat from bones, construct tools from scratch, and clumsily march towards their destiny as part of larger narrative unraveling the cosmos. The video is inter-spliced with poetic source text, and these creatures sport the now familiarized winter coats alongside crooked walking sticks. The traditional text is used by the creative duo as an entry point for creating an improvised spectacle, partially inspired by Guy Debord's Situationist movement. In contrast to Rosdahl's tenebrous presence, Vetterstad and Winther are surrounded by white light reflected from a snowy milieu.

“If the Light Should Take Us” initiates an advanced inquiry into black, pagan, religious and political iconography; displayed works pry open obscurantist ponderings such as why Scandinavia is frequently marked as a cultural breeding ground for such aesthetics; ranging coordinates on the light-dark and pleasure-pain continuum surface via this malleable array of artists engrossed in their self-designed practice. Ancient themes are respected yet visual codes are reconfigured, coercing any Scandinavian artistic stereotype to both collapse and renew itself. Black-metal inspired exhibitions such as this one are no longer interested in repetition in-and-of-itself but more so the transformative power of influence when recognized.

Posted by Jacquelyn Davis on 8/23/11
Tags: black-metal sculpture video-art painting photography
RELATED ARTICLES
COMMENTS (0)
ArtSlant has shutdown. The website is currently running in a view-only mode to allow archiving of the content.