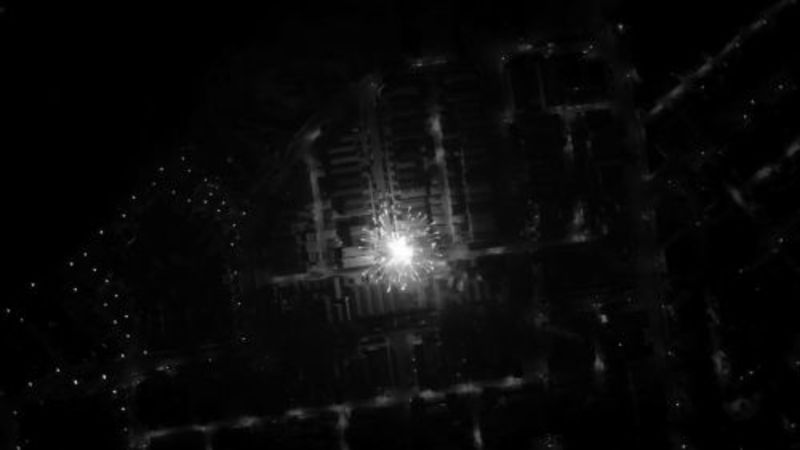 Loud explosions last night reminded me that the Fourth of July is just around the corner, and that once again my neighborhood would most likely be enveloped in a cloud of sulfur from the illegal (and amazing) local firework displays.

The phenomena of the Fourth of July is at the heart of Greg Stimac’s current exhibition “Empire” at Andrew Rafacz Gallery, which closes in advance of the celebrations, on July 2.  For years Stimac has been investigating easy-to-overlook aspects of American life that are nonetheless highly significant: gun ranges, the hideouts of America’s most notorious outlaws, and lawn care, to name a few subjects.  The eponymous artwork, Empire takes up America’s annual firework frenzy.

In name, Empire references Andy Warhol’s 1964 film.  However the Warhol connection seems to be a nod only. Warhol’s film was a full eight hours long, consisting of a static shot of the Empire State Building, while Stimac’s is relatively short and with different angles.  What both artists do take as subject, however, are symbols of American identity.

Andrew Rafacz Gallery is enveloped in darkness, showing only the silent, eleven-minute black and white film on a large screen. Unlike an actual firework display, the encounter is somewhat meditative then; the explosions are gone as are the colors; overt patriotism is drained out and you are most likely with a couple of other people at most, rather than a crowd.  In this way, Stimac decontextualizes the spectacle and allows a moment of pause and consideration for an event that is the complete opposite.

Shot from an aerial perspective at night with the explosions of the fireworks happening over clearly discernible neighborhoods and residential houses, I was ironically reminded of video imagery from the 1994 Gulf War of smart bombs and cruise missiles delivering their deadly payload that were shown regularly on the news.  Through his cinematographic decisions, Stimac seems to reference the political rhetoric of the second Bush administration that justified and surrounded the initiation of the Iraq War (or the Second Gulf War), showing the nightmare vision of Colin Powell where America is under attack.

Like his work depicting firing ranges, Stimac draws out the peacetime application of weapon technology and the associated Orwellian paradoxes therein.  Apparently America celebrates and relaxes by exercises of violence.