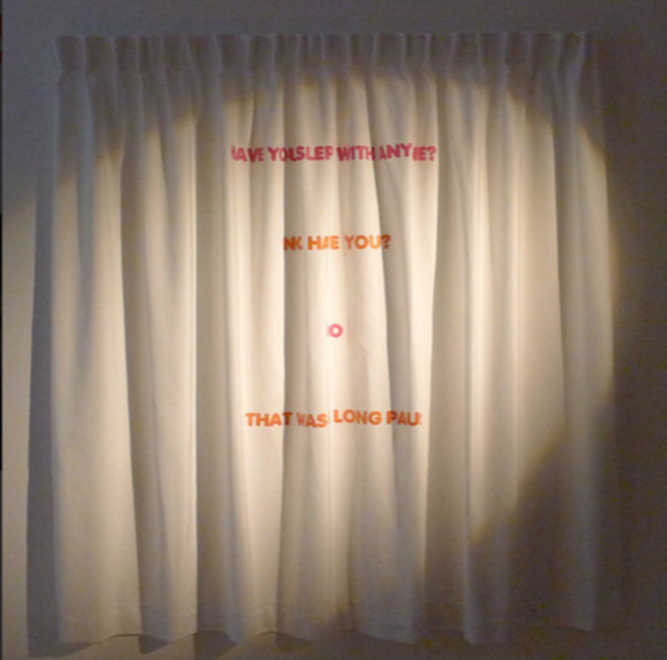 White, billowing curtains display seemingly banal yet biting phrases appropriated from a disheartened couple's filmic encounter in their hotel room. The same bubbly, delicious font used by Dunkin' Donuts (no coincidence) is found alongside material items associated with conventional romance or courtship: lit candlesticks, matching bathrobes and house slippers, hotel curtains splayed with overused phrases that punctuate initial encounters between the fragmented couple, in a gesture to express any classic couple's journey towards heartbreak and disillusionment. The unexpected presence of Dunkin' Donuts symbolizes unhealthy, excessive dietary consumption, and the once meaningful, intimate portrayal of a relationship is reduced to a sugary morsel of unwanted baggage.

The title on the curtain, “I Promise, I Will Never Be Your Friend. No Matter What, Ever...”, is drawn from  the dialogue of Wes Anderson's short film Hotel Chevalier starring the striking Natalie Portman, in which she proceeds to break up with her unsuspecting boyfriend. The artist claims (or at least his press release does) that the exhibition is  “a theatrical representation with the relationship plot at its heart. The end of a relationship and the idea of entropy form the dual engine in this story, driven by a set of dramatic events.” But what can be gained when the notion of "the standard relationship" between two individuals is transferred onto other power relations present in life? Such as the one Kjelltoft makes the dramatic leap to: between the consumer and the consumed. 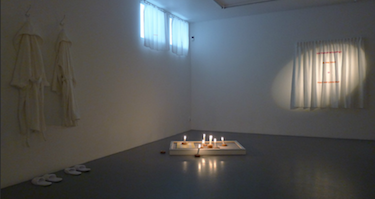 The viewer should consider: what remains of real value, when tedious cycles of consumption and waste also effect the personal relationships many find to be their reality? In this era, some may be caught taking inventory of their own lives, to discover that they are tragically bored or out of joint. Many tire of each other, so they locate someone else even more “compatible” than the last mythical entity they fixated upon. There are so many choices; choices once made logically, soundly, can be overridden by surfacing alternatives which didn't exist prior.

Like the space between being in a relationship or not being in one, the decision to either consume or not consume is equally confusing and ambivalent. When does one know if they are "in" or "out" without the media's coded indicators or keywords associated with stepping stones either towards or away from any goal sought after: to be single, to be together, to be alone but together, to be together but alone. Also present in the exhibition is a hypnotizing slideshow displaying photographs of flimsy paper napkins from Dunkin' Donuts which slowly disintegrate in water, leading to the overall impression of “I Promise, I Will Never Be Your Friend. No Matter What, Ever...” Whatever once was won't always be; whatever was forever really wasn't much longer than the time it takes to go through a drive-thru; whatever was once thought of as necessary was only wanted—and only for a spell. Any definitive answer or choice leads to one pretty trap or another, but an arrogant world continues to exude confidence in its choosing.