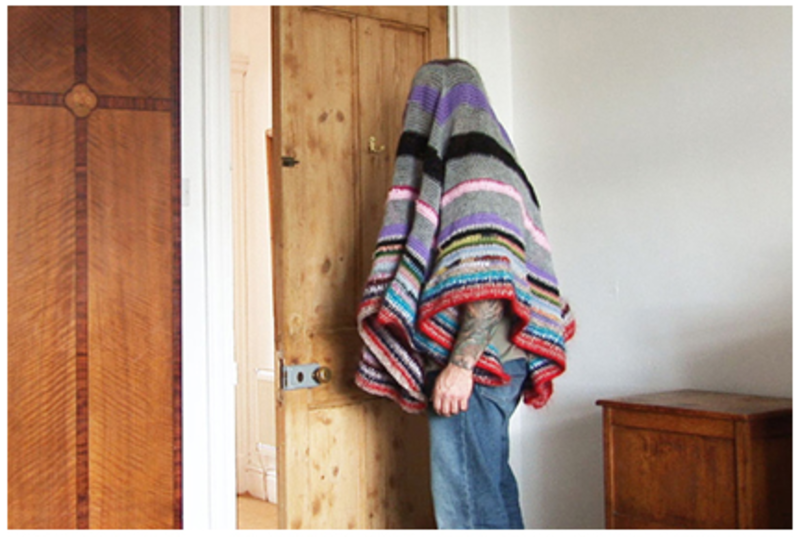 Though not a recent work, Swedish artist Sofia Hultén's video titled, Familiars, 2007, expresses how easily one's home can become an off-kilter nightmare, by simply altering the environment in seemingly insignificant and unpredictable ways. A lengthy video of 36 minutes meant to be looped, the home as a haunted scene is not only a one-time only affair but repeated, perhaps emphasizing how certain domestic complications tend to repeat themselves. Where is there left to go when the home no longer serves as solace or escape? 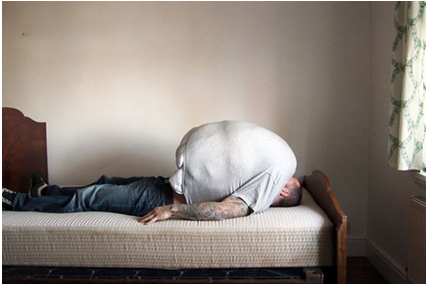 The scenes range from the awry to blatantly silly, with one family member covered in a colorful, striped blanket pretending to be a ghost—similar to the simplified Halloween costumes from childhood. Another scene illustrates a sequence where an older woman positions fragile glasses, one upon another, in a tower-like fashion onto one stovetop burner, and another shows two flimsy hands protruding out of a gutted chest of drawers appearing at first glance to be empty. Is this a civil family at odds with another using a method constructed just to suit their tastes? Do they choose to remove the others via a series of obnoxious stunts, or is this instead an expression of how they are united in their mutually shared eccentricities? This experiment of displacement reminds us that it is not the object or the person that can frighten, but what the object or person chooses to do in relation to other objects or persons. Fear assumes a delicate balance—an intimate relationship among and between factors and faces. A lone woman sitting  in the almost dark near a soft glowing lampshade is nothing to be afraid of, unless one doesn't notice her presence in the corner, or unless she does not belong in the room. 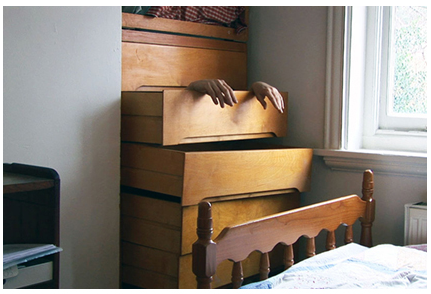 A scene which seems ridiculous at first glance can become grotesque, such as the image of a man lying in bed, his shirt filled to the brim with throw pillows which extend to cover his face. Does this man intend to scare family members with his false display of excessive midriff, or is it his feigned neglect for his own health which is a method to stave off relatives? Is it the pretense of negligence or overall resignation that this figure strives for? Alongside these aforementioned scenarios is the strategic placement of rusty stains, indoor smoke, miniature goblins camping out in the cupboard and floating desk chairs.

Is Hultén attempting to provide another with a video handbook of ways to destroy one's nuclear family? If these types of actions are repeated enough, any comfortable nest is sure to fall apart. The artist seems interested in the notion of disappearing, fading into one's background or distinct feelings which stem from not so successfully blending in with daily rituals or behavioral patterns. There is no way to know if this family manages to be a family after such a sequence of staged hauntings; the problem lies not in the family but in its myth.