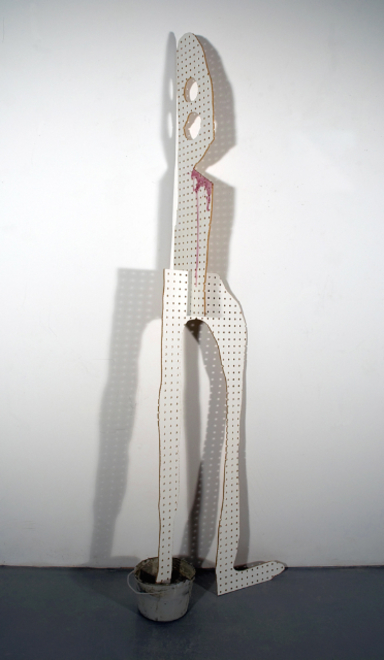 Even in the current economy of serious propositions, artists are still making experiments, fucking around, trying out new things. For artists Ryan Peter and Raymond Boisjoly, a collaboration takes them away from managing their individual (and usually separate) careers and endeavors; collaboration becomes the occasion to float crude fledgling experiments, conceptual jokes in material form.

The two have been making collaborative experimental works for a few years now, pairing up at random intervals for short shows that explore humor, tangents and personal deviations from their own conventions of practice (Peter is primarily a painter and Boisjoly ranges from text graphics, interrogations into media, and all manner of awkward Utopian material investigations). Their most recent outing is a musing of this sort, using wine as pigment to stand in, perhaps, for altered states and the substances that produce them. This ‘work’ might be considered a tableau or a series of small mostly 2-D sculptural works. Their artistic dalliance currently hangs at Lucky’s Comics in a small back room gallery with ugly carpet, creating a weird proposition of awkward creaturely composition.

The exhibition consists of a rough translation of drawing into peg board, acrylic, Quikrete, a bucket, and Carlo Rossi "California Red" wine. Formed with a jigsaw, the shapes are adorned with the pigment of (presumably cheap) red wine. The spills and swaths of wine make monochrome patterns on crude aenanome-like forms. It’s all very “stupid” or “bad”  in that way that those two words sometimes get favorably bandied about, deliberately anti-aesethetic in an effort to be loose. Boisjoly attributes work to the artists mutual desire to follow through on “big dumb ideas,” meaning those that are of interest, even if they’re not all that deep.  Positioned adjacent to one another, most of the cut pieces of pegboard are assembled onto a single wall space in a logic that evokes the crudeness of children’s drawings. Across the very small room, loitering on the other wall is a witness figure, comprised of the same pegboard. It stands with one foot in a bucket filled with some altogether unsightly concrete, mixed using wine instead of water.

This experiment in composition, which the two don’t take so seriously, finds a corroborating environment at Lucky’s, where gangsta rap colouring books, the latest McSweeney’s, and books by Byrne and Eno rub spines with an extensive offering of comics and graphic novels. The space overflows with stories, both clumsily drawn and beautifully rendered, formed and packed onto paper of all shapes and sorts. This chamber of factual drawing used to depict (or not) is not really a metonym for Peter and Boisjoly’s work, but the spirit is consistent.

The work and the space inhabit a subgenre within the professional field of Vancouver’s artist run and professional gallery environment. Less slick, Boisjoly asserts that the material itself isn’t really that important, that it “could be made of anything.” This short-term installation, up throughout March, is a weird incongruous gesture of collaborative thought that doesn’t convey anything that is meant as “work.”

Here we have two friends working together, playing, making something without the trouble of “career” or even simply to loosely break the rigmarole of a single practice. Hopefully it makes you chuckle, or better yet, cause a streaming flicker of thoughts on wine, pigment, media, pop-up shows, experimentation, art jokes, abstract figuration, indecipherable gestures, straightforward meaninglessness, Randy Newman, and the possible duality of inception versus duration.

One can’t help it but want to say you should go or not go to see it. Isn’t that the point of a review? It would be a stretch if I told you that you ought to go and see this work for its aesthetic or conceptual merits, but is that really the reason we walk into a gallery? The reason, if we must have one, is that it might spark your curiosity, and remind you of the need many artists have to simply try something out. There is nothing unheard of here in this. Perhaps it is a joke you’ve heard before, though you might still laugh at it a second time.

And, those expecting something amazing may not like it, but in that case, as Raymond tells me, that it will be all Ryan’s fault.

Posted by Allison Collins on 3/7/11
RELATED ARTICLES
COMMENTS (0)
ArtSlant has shutdown. The website is currently running in a view-only mode to allow archiving of the content.