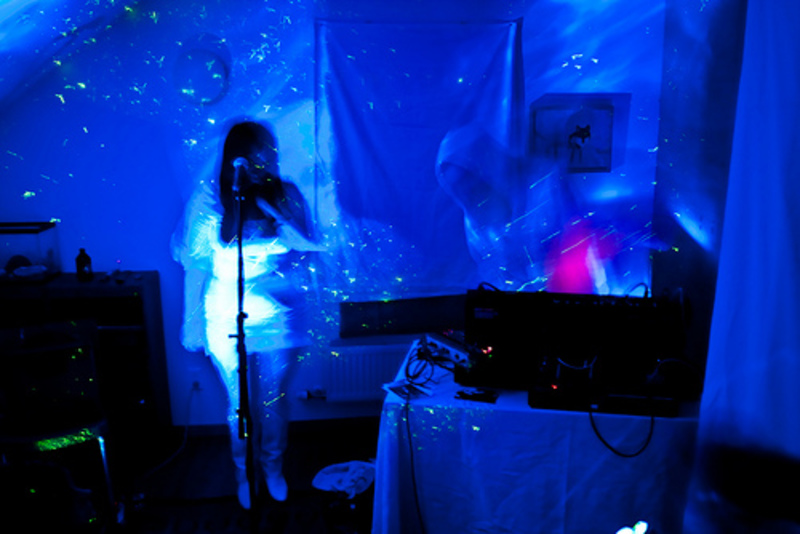 The Recognitions: The Open Klara Glosova

Klara Glosova is a transplant to Seattle, originally hailing from the Czech Republic, but more recently of New York and Sitka, Alaska. As a practicing artist, her work has long been a process of turning inward, created she says, “in isolation.” Her most recent show, at The Living Room here in Seattle, used the record of a vivid and strange dream about having and art show and cake to produce a large number of sexualized, dreamlike popsicle-forms. The geometry was purely internal, but the popsicle became a pleasing and useful form to reproduce. Hot n' Cool and Bittersweet: Klara Glosova @ The Living Room dressed up this form in knit costumes, deconstructed it to pure curves and functional skeleton, and played with the amorphous and anthropomorphized images of the subconscious. This type of art, where the artist is almost divinely inspired to create their own visual language and regime of signs is always fascinating, and Glosova is skilled at unteasing the threads of intrigue inherent in any interesting kernel of the idea. Still, she understands the need for multiple processes and outlets for creative energy.

More recently her semi-isolated location on Beacon Hill (not a traditional art destination in our city, but a wonderful residential neighborhood) inspired an open-arms approach. Or open door policy. Regardless of what you call it, NEPO House has succeeded in bringing artists and the art community literally into her life and home. Recently I participated in a panel discussion with Klara in which she discussed the surprisingly strong response to her first openings and events at the house. To me, this is no surprise.

At times, Seattle doesn't feel like it has a strong institutional center of gravity. In such an environment, possibly further spurred by the recession and decreased gallery sales, a number of smaller boots-on-the-ground institutions have come up. Each is interested in accessing any and all niches that are not being filled by the traditional institutions. While some are simply small showrooms (which should be congratulated) in which to show the art of friends and acquaintances, NEPO House started with a larger investigation of what a space for community, openness, and communication would mean. This program, known as home_page.project, produced the vision of NEPO House and became NEPO 1, the first show and event to be held there. More Recently, Glosova has transitioned into showing art in her front entryway (a series known as LITTLE TREATS), focusing on small shows or individual projects. This came out of a desire to minimize furniture reorganization, but also to build on the power that small projects and things can have when connected. The openings have featured artist-cooked food (perhaps the eponymous 'treats'?), group creative projects, and have drawn interested parties from all over the city.

Still, Klara Glosova is no pushover or party trick. NEPO backs up all its programming with a robust, sincere, and thoughtful justification supplied in part by the goodwill and integrity of the host. If the most recent show is to be any indication, we have a lot to look forward to from Klara and her open house.

Posted by Jessica Powers on 2/22/11
RELATED ARTICLES
COMMENTS (0)
ArtSlant has shutdown. The website is currently running in a view-only mode to allow archiving of the content.