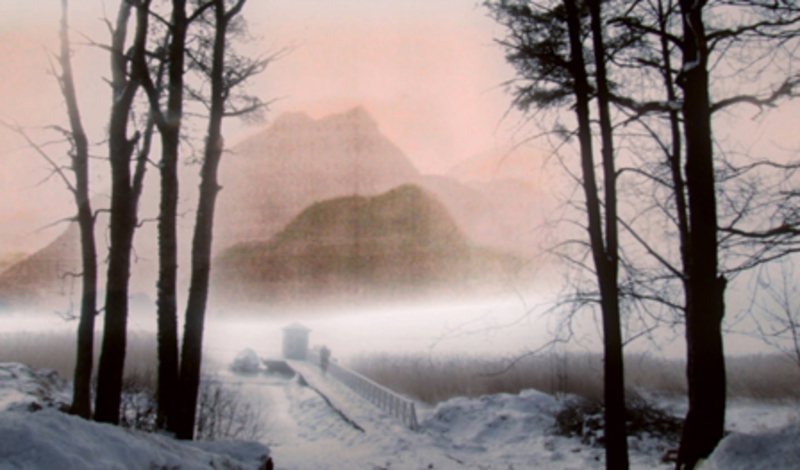 In Petra Lindholm's fifth exhibition at Galleri Magnus Karlsson, titled “Till Anne Marie / For Anne Marie,” Lindholm's new work exists alongside Peter Köhler's complimentary exhibition “Star City Garden.” This Finnish artist dedicates her show to her blood relative; the content is based upon her great aunt's personal narrative and history. Living in Finland in the early 1900's, 'Anne Marie' was once engaged to a Russian man by the name of Mr. Obolenski who was forced flee to Paris during the Russian Revolution. He was never to be seen again, despite his engagement with the heartbroken Anne Marie. Lindholm explains that her great aunt became sick from sadness and committed herself to a quiet sanatorium sequestered in the Alps. As part of her aunt's self-constructed therapy, she chose to document these mysterious, hazy mountains on a number of different occasions, often in a repetitive manner.

Lindholm displays this mountain range which both assisted and haunted her distant relative as a series of soft photographs, three-dimensional textile wall pieces softly lit from behind, plus a longer film installation, titled Till Anne Marie / For Anne Marie, 2010 set aside in one of the gallery's middle rooms illustrating variations of her great aunt-alone in the midst of this mountain range and moving through the phases of her life. This filmic scene is expressed in pastel, subdued shades of light pink and coral, as well as stony hues such as cloud and heather grey, alongside sparsely used black to denote silhouettes, footsteps or forest details. Lindholm also created a musical score for the video which is beautiful-almost paralyzingly so and with poetic sensitivity. Lindholm's Till Anne Marie / For Anne Marie, 2010 illuminates both her great aunt's intimate journey to overcome heartache and visual elements empathizing a mutually shared emotion of loss.

Lindholm's relative suffered by not being able to consummate her love with her fiancé in one of many traditional ways; she was unable to share the rest of her life with the one she deemed as her soulmate. In choosing the mountains as both solace and comfort, Lindholm emphasizes the curative powers of nature-that choosing life over death, that bravely moving forward instead of living in despair can be a difficult choice. Lindholm's video installation Till Anne Marie / For Anne Marie, 2010 serves to explain, alongside her other works which share the same theme, that the world is filled with opportunities, useful tools and beneficial ways in which one can overcome strife. The world surprises, if one is open to searching for 'the medicine' in less obvious spaces or faces. A majestic mountain, snow-covered field or open sky are not always viewed as strictly environmental factors for the lonely.

—Jacquelyn Davis
Posted by Jacquelyn Davis on 2/14/11
RELATED ARTICLES
COMMENTS (0)
ArtSlant has shutdown. The website is currently running in a view-only mode to allow archiving of the content.