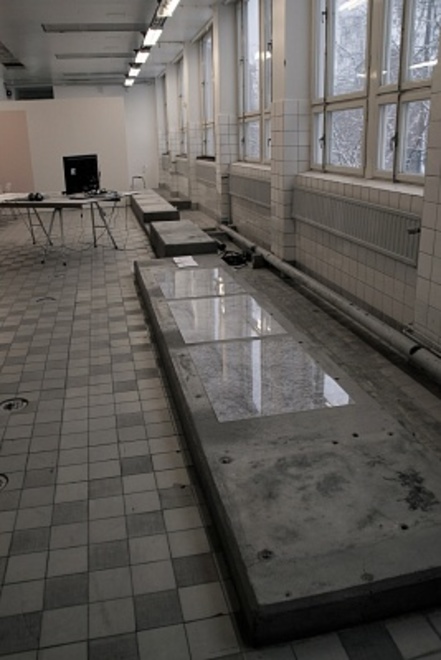 Curated by Kim Einarsson, Johan Tirén and Niklas Östholm, Konsthall C's “Home Sweet Home” brings to light a significant issue that residents of Stockholm and its environs are continually burdened and consumed with: housing. Aware of how this issue affects not only any given society but one's personal life and their ability to reach individual goals, the works of various artists, including Katarina Bonnevier, Andjeas Ejiksson, Per Hasselberg, Katya Sander and Mattias Åkesson are brought together with the intent to initiate a specific series of inquiries and, perhaps, even answer a few of them. Questions such as: what constitutes a home as both a residential structure and political space, what signifies a piece of property versus an investment, how do individuals from various backgrounds choose to define the 'home' as both an architectural unit and personal haven, is the suburb a conceptual failure?

Most artworks were constructed specifically for this exhibition in mind, which consists of video work, text and image compositions, interactive variants provided on computers, sound installation, as well as accompanying text supplements, pamphlets and publications provided by the curators. Lectures were also provided by others, such as Irene Molina, Emmerik Warburg and Moa Tunström which took place in the previous spring and fall of 2010. These lecturers discussed a range of topics from the dissection of associated nomenclatures linked to the concept of the 'home' and ideological perspectives of 'utopia' and 'living standard' to notions of inclusion versus exclusion.

Katarina Bonnevier's work stands apart in my memory; she considers herself a self-employed architect, researcher and educator. Her current projects are FATALE―a Stockholm-based group which focuses on feminist architecture theory via analysis, laboratory and education―and her written work is Behind Straight Curtains: towards a queer feminist theory of architecture (axl books, 2007). She contributed the piece Never trust the decor, 2010, inspired by the American author Natalie Barney, which is an installation and lecture providing the questions, “what would begin to happen to us if we began to see architecture as a living action that forms and formulates our sense of self and our identity? If we understood our own role in this staged event, would the world be changed in any way?” She brings up the point that our environments are directly linked to our own personal construction(s), but what happens when an individual living in house x that was built and meant for others doesn't suit person x because person x wants to live or is living a life which has yet to be charted, not yet confined by existing patterns or daily rituals pre-supposed by house x's structural boundaries?

Another notable contribution was Katya Sander's lecture titled The usefulness of inadequate models (working title), 2010 which deals with notions of the 'imaginary' revolving around politico-social life and language, as well as maintaining an architectural and scenographic focus. She illuminates how social dictations are both created by society and just how they are specifically created; these dictations, in turn, influence individual thoughts and actions stemming from such thoughts. Sanders attempts to dissect through a number of both pointed and open-ended questions how the viewer or observer is also considered and defined. Sanders creates a dichotomy between real and staged actions, so as to investigate and clarify difference. Also, the art project as walking club known as Gåafstand (consisting of Pia Rönicke and Nis Rømer) was both expansive and informative. Based upon the walker's enthusiasm for city planning, curiosity for changing architecture, as well as their experiences exploring Copenhagen as an organic entity and changing city, Gåafstand is interested in reformulating their city's parameters, as well as creating ways to find meaning which can be derived from how one interacts with one's city.

Per Hasselberg, The small house bureau, 2009. Photo: Behzad Khosravi Noori
“Home Sweet Home” provides the viewer―no matter what the definition of 'viewer' may be― multiple entrance points to better engage with questions revolving around a shared environment, tradition, hearth, illusions linked to spatial conventions, as well as surfacing problems such as gentrification and the over-simplification of architecture and history. Works provided were often factual or archival in nature, yet many artists such as Ylva Trapp and Ella Kajsa Nordström in Holmgårdsvägen 34, 2010 take a more classically artistic route, sharing their documented traces and remnants from their weeklong stay in a poorly maintained Stockholm apartment located in the suburb of Täby. Offering their floor rubbings using graphite pencils, these artists focus not so much on fact but on physical remainders to define a space. This site-specific project allowed room for them to play Detective―witnessing an apartment inspection before new tenants arrived, attempting to gauge the previous life/lives that the vacant apartment possessed before them.

Issues which affect almost everyone are introduced within the context of “Home Sweet Home,” such as segregation, economy, discrimination (either deliberate or as an unintended offshoot from other prevailing forces) and even aesthetic taste. The truism is true, what is considered beautiful by one person is not always recognized or assumed by another, but this can create conflict when a particular environment must be shared, but especially by Stockholmers.

The housing problem in Stockholm is serious. Incoming international students have been documented living in tents on one of Stockholm's many university campuses; the current queue system, which should provide adequate housing for these students, fails miserably. The wait list for student housing in the center of Stockholm can last anywhere from sixty days to a year, depending on when the student enters the queue. Swedes have been known to place their newborns on multiple wait lists for apartments upon birth, to ensure that their child can acquire proper housing upon entering adulthood. It's ridiculous, but Stockholm is an old city, stubborn and somewhat unwilling to override its current architectural structure to allow room for newcomers. So, new residents are often pushed to the outskirts or placed in compromising living situations. Home, sweet home.

Posted by Jacquelyn Davis on 2/14/11
RELATED ARTICLES
COMMENTS (0)
ArtSlant has shutdown. The website is currently running in a view-only mode to allow archiving of the content.